A 6-month-old child presents with cough and runny nose for 2 days with increased work of breathing.  She is working hard with moderate subcostal recession. Once you hear the cough, it can only mean one thing….the start of bronchiolitis season.

Bronchiolitis is, as the name suggests, inflammation of the small bronchi and bronchioles. The clinical entity we know as bronchiolitis is the most common admission diagnosis in patients under 2, accounting for high morbidity in this population. More succinctly;

“A seasonal viral illness characterized by fever, nasal discharge, and dry, wheezy cough. On examination, there are fine inspiratory crackles and/or high-pitched expiratory wheeze.” – The University of Nottingham, in their 2009 Acute Breathing Difficulty Guideline.

It is most often caused by respiratory syncytial virus (50-80%), as well as parainfluenza (especially PIV3), human metapneumovirus, influenza, rhinoviruses, and adenovirus. In the words of my first general paediatric consultant:

“Bronchiolitis is a typical winter illness, which almost every child gets in their first two years of life. What matters is first, how old you are when you get it, and secondly, what kind of condition you’re in.”

What are the clinical features?

Auscultation of the lungs may reveal a wheeze and transmitted upper airway sounds. A focal zone with decreased air entry or coarse crackles is more consistent with pneumonia.

It is well described that a typical course of bronchiolitis lasts 7-10 days, with night 2-3 being the most severe. In this respect, it is important to reconsider the diagnosis in any patient not ‘sticking to the script’, or deteriorating after initial improvement. A cough may last for up to four weeks.

The diagnosis is primarily clinical. Clinical features of an area of the lung with decreased air entry or consistent focal crackles warrant a chest radiograph to exclude pneumonia. A chest radiograph infrequently adds to the clinical picture and is not routine.

Some clinicians will obtain a nasopharyngeal aspirate or flocculated swab for respiratory virus PCR. There is also a rapid antigen test, which is good for ruling in, rather than ruling out, a particular virus.

Although typing of the respiratory virus causing bronchiolitis may be helpful for bed management and nursing, it is unlikely to alter management.

This point remains controversial as knowledge of the causative organism may allow some prognostication regarding illness course and prevent unnecessary antibiotic usage. It does not rule out dual respiratory tract pathology, such as secondary bacterial infection.

In particular, there is merit to obtaining swabs in patients with risk factors for severe infection, thus:

Around 50% of children with severe infections have none of the above risk factors.

Children at risk of severe infection and mild symptoms should be admitted and observed.

As noted earlier, the course of the illness is that night 2-3 is usually the most severe, thus any child presenting earlier will potentially worsen, sometimes quite rapidly.

How do we manage it?

Management is supportive, with rehydration and fluid maintenance whilst unable to feed and respiratory support as required. If the child is unlikely to deteriorate and does not require inpatient observation or additional support, they can often be managed in the outpatient setting. It’s essential to provide clear safety-net advice for when to return to ED as well as strongly encouraging an early GP review.

What level of oxygen saturation is acceptable?

There are differing opinions regarding target oxygen saturation in patients with bronchiolitis. Most would agree on a target somewhere between ≥94% and ≥92%. But which? 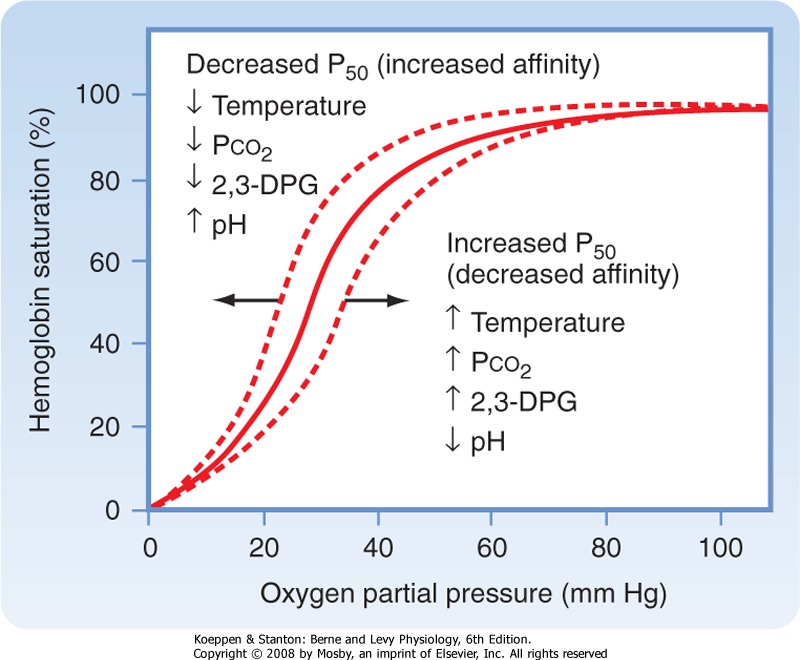 Conditions that push the curve to the right (higher PO2 to maintain SaO2 and curve has a steeper gradient), are decreasing pH, increasing temperature.

Thus, in a febrile, acidotic child the curve is pushed to the right, requiring a higher PO2 to maintain the same level of saturation and thus increasing the likelihood of desaturations. In these children, aiming for an SaO2 of 94% would be reasonable. Local guidelines may have differing suggestions.

Oxygen delivery can be via nasal cannulae, or if bronchiolitis severe by high-flow humidified oxygen via nasal prongs.  High-flow provides continuous positive airway pressure (CPAP) and aims to avoid intubation.

In life-threatening cases, sedation, intubation and ventilation may be necessary and should be done with PICU and senior support. In regional and rural settings, it’s important to be aware of local limitations and consider early transfer to a tertiary centre for deteriorating, high-risk patients. For the care of such patients, make early contact with your regional Paediatric Emergency Transfer Services.

Children with acute illness are susceptible to SIADH and hyponatremia. Thus, it’s important that whilst supporting the increased insensible losses and decreased intake as a result of respiratory distress we don’t over hydrate the patient. Around 2/3 maintenance for an infant not tolerating oral intake is sufficient to both hydrate and reduce the likelihood of SIADH. Most paediatric departments would use 0.9% saline and 5% dextrose.

In mild cases of bronchiolitis, small, frequent feeds may provide sufficient hydration. As respiratory distress increases, nasogastric feeds (continuous vs bolus) may be required. For a child with severe bronchiolitis, on high-flow nasal prongs or moderately dehydrated, intravenous therapy is indicated.

Antibiotics are not indicated for bronchiolitis, nor is there a benefit in the use of steroids, nebulized adrenaline, or bronchodilators. Additionally, there is no benefit in physiotherapy or macrolide antibiotics.

Although salbutamol does not alter the clinical course of bronchiolitis, in the case of a strong family history of atopic disease or asthma it would not be unreasonable to trial a course of salbutamol, particularly in the child >6 yo who is presenting with a wheeze.

It’s important to assess the child pre- and post-salbutamol for both subjective and objective clinical response. This may also have some utility in differentiating between viral bronchitis and a viral-induced wheeze. Again, this is a controversial sub-topic with evolving evidence.

Bronchiolitis has a broad range of differential diagnoses; it is important to consider these, particularly if the patient is not responding as expected to your initial management, or if there are features of the history or examination of an alternative diagnosis.

Pneumonia or other pulmonary infections, including mycoplasma and pertussis – listen for focal crackles or signs, productive cough or radiological features of pneumonia. These patients will usually have a fever, in addition to cough and tachypnoea. Consider viral, bacterial, chlamydial or mycoplasma pneumonia. This is a common alternative diagnosis for bronchiolitis.

Recurrent viral-triggered wheezing – another common alternative diagnosis, viral-triggered wheeze may present quite similarly. Features in the history that might point you towards a viral-induced wheeze, is that of an antecedent URTI which had resolved, followed by wheeze and work of breathing a few days later, with or without fever. Differentiating between RSV bronchiolitis and a viral-induced wheeze can be particularly challenging.

Meningitis – most consultants can describe a patient who presents during a “bronchiolitis epidemic” who has meningitis. Always consider this differential diagnosis. Although it’s had to find case reports in the medical literature, unfortunately, the lay press has many examples of this.

Foreign body aspiration – characterized by rapid onset and failure of initial management. May have a low-grade fever. Have a high index of suspicion.

Croup – usually stridor rather than a wheeze, and with a similar gamut of causative organisms. Laryngotracheobronchitis can present with a wheeze in a child with bronchitic disease.

Aspiration pneumonia – consider more strongly in children with poor airway protection, including spastic cerebral palsy, or in any child having seizures or convulsions.

Gastro-oesophageal reflux – up to 40-50% of infants with GORD present with wheeze or respiratory symptoms. There is also an association with chronic cough.

Asthma – an acute exacerbation is less likely to have fevers, and will often have a personal history of atopy or allergy, or a family history of asthma. It would be rare to diagnose a child under two with asthma at a first presentation to the hospital with a wheeze.

Congenital heart disease and heart failure – to be considered in any neonate presenting with increased work of breathing, with or without apneas. These patients will look unwell, with a constellation of symptoms including disproportionate tachycardia, poor perfusion with or without cyanosis, weak femoral pulses & murmurs.

Vascular ring, congenital lobar emphysema or a bronchogenic cyst  – may also present in neonates with a “bronchiolitis-sounding” history.