When a case is presented you probably like to assume aime things are a given – that capillary refill time is a universal constant no matter who performs it, or that the way one person measures the respiratory rate is the same as the next. I’m always a little intrigued as to how things are the way they are, and so this time I’m going to take a closer look at pulse oximetry.

How does it work?

Whilst large fixed machines that could measure SaO2 have been around since the end of the Second World War, the more portable machine sprang into existence in the mid 1970s. Aoyagi gives a fascinating account of its development in which he describes using two tungsten bulbs as the light sources (at wavelengths of 630nm and 900nm) shone at the plucked ears of anaesthetised dogs before sampling arterial pH and PaO2. Now, fancy electronic jiggery-pokery measures the absorption of light at two frequencies (660nm and 940nm). As the light passes through it is absorbed differently by pulsatile tissue and oxygenated tissue. Differences are averaged over time and a number that is hopefully nearer 100  than 80 is produced.

The oximeter uses the time difference between peaks to calculate the pulse rate in beats per minute. 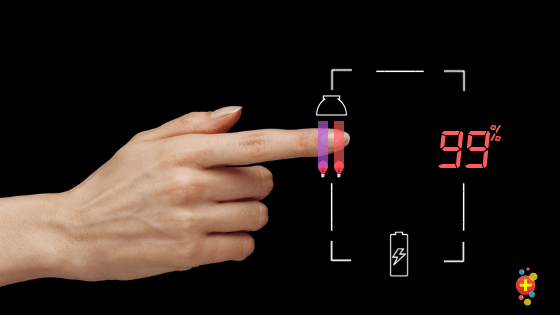 In both the ED and NICU/PICU we are constantly bombarded by alarms. A number of tragic cases have occurred due to alarm fatigue in healthcare workers and given that most pulse ox alarms are false we need to think about what might make the SpO2 less accurate.

If the probe is not place just-so, emitted light can bypass the digit and go straight to the photoreceptor leading to a falsely elevated reading.

Anaemia shouldn’t have much of an effect on SpO2 as both oxygenated and deoxygenated blood are reduced in equal amounts.

You might think that jaundiced skin would have an impact on light absorption and you would be right. It peaks at 460nm, 560nm and 500nm though  so is not affected by the standard 660/940nm light used in pulse oximeters. The colour of ones skin also does not affect the reading.

Both carboxy- and methaemoglobinaemia absorb red and infrared light differently and can lead to inaccurate readings. HbCO can lead to false reassurance with normal appearing sats. Given that machines are calibrated using normal, healthy volunteers with a normal level of HbCO and MetHb it makes sense that if you have a non-functioning haemoglobin then the standard probe will be less accurate. Fortunately the fetal haemoglobin that a large number of our patients rely on has similar absorption to 660 to 1000nm of light.

The readings are more accurate with good tissue perfusion and so cannot be relied upon to be accurate in poor perfusion states be they pathological (sepsis) or iatrogenic (inflating a BP cuff).

Motion artifact seems to be one of the common cause for false alarms with it taking just a wriggle to set the machine bleeping. Newer signal extraction technology has made this less of an issue but when the alarm goes for low sats it is worth looking for potential motion artifact. 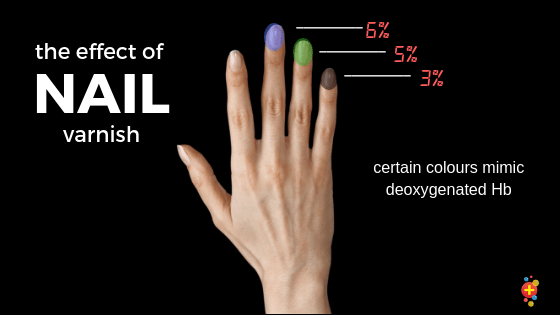 Hopefully our younger patients are not wearing nail varnish but I have seen many an acrylic nail in the adolescent population. There is conflicting evidence surrounding the impact of nail varnish. It depends on the colour. Some data suggests that varnish that has similar absorbance to deoxygenated blood (around the 660nm range) might lead to an artificial lowering of the reading. The studies have only ever been carried out in small patient sets so there is a lot of room for error. Suffice to say, if the patient in front of you has nail varnish on, take it off.

What about detecting hypoventilation?

It’s interesting, isn’t it, that we place an oxygen saturation probe on our soon-to-be sedated patients and then pop on supplemental oxygen. Whilst this is much more common in the adult environment it still does occur in paediatrics. A lovely two phase study by Fu et al. showed the expected rise in ETCO2 and PaCO2 with post-operative hypoventilation. In the second phase of the experiment the ‘volunteers’ were randomised to breath room air or supplemental oxygen. They found that when a patient was spontaneously breathing room air (FiO2 = 0.21) they were unable to hypoventilate to a PaCO2 > 70 mmHg without their SpO2 dropping below 90%. If they even had a trickle of oxygen (FiO2 = 0.25) their PaCO2 could rise to around 100 mmHg without a drop in oxygen saturations. Pulse oximetry should not be used as a sole means of detecting hypoventilation, especially in the presence of supplemental oxygen therapy.

Children can have tiny fingers, so where can you put the probes?

Blisters have been caused by incorrectly placed probes. Recently a Patient Safety Alert has been sent around by the NHS Improvement body citing the risks of harm of incorrect placement. Adult probes on children can produce falsely reassuring readings. Site specific probes should be used – fingers, toes, ears, forehead.

Do you have a portable sats probe in your pocket? There is a good chance you do but didn’t know it. With most of the medical workforce owning a smartphone you might be surprised that you can use it for something more than catching up on the latest tweets from @DFTBteam. There are camera-based apps that use the strobing flash and camera lens to determine heart rate and oxygen saturations. There are also probes that can plug directly into the phone, though these are much more costly than the app based option.

Barker SJ, Shah NK. The effects of motion on the performance of pulse oximeters in volunteers (revised publication). Anesthesiology: The Journal of the American Society of Anesthesiologists. 1997 Jan 1;86(1):101-8.

Author: Andrew Tagg An Emergency Physician with a special interest in education and lifelong learning. When not drinking coffee and reading Batman comics he is playing with his children. @andrewjtagg | + Andrew Tagg | Andrew's DFTB posts
April 1, 2019 0