Andrew Tagg
Community paediatrics / General paediatrics / Respiratory
Cite this article as:
Andrew Tagg. Measuring respiratory rate, Don't Forget the Bubbles, 2018. Available at:
https://doi.org/10.31440/DFTB.15505
The respiratory rate is a key part of our assessment of illness and underpins many a paediatric early warning score. It’s time for me to go back to the basics again.
I’ve looked at a few things now:

Now I am going to take a look at how good we are at measuring respiratory rate. Respiratory rate/effort is one of the sides of the Paediatric Assessment Triangle so we should be good at it. Respiratory rate, along with the presence of intercostal recession is one of the clinical parameters suggested by the World Health Organisation to determine whether a patient might have pneumonia and require antibiotics. They suggest that a respiratory rate of 60 or more in infants under 2 months of age, 50 or more in 2 to 11 month olds and 40 or more in those greater than 12 months is required to make a diagnosis of a lower respiratory tract infection. 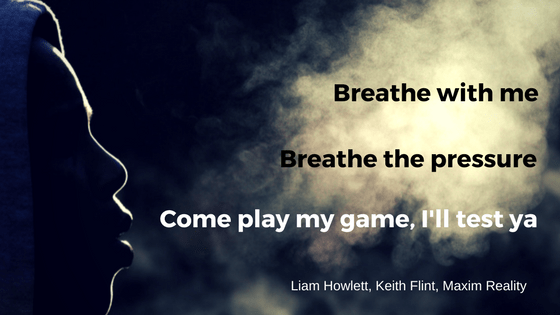 Let’s start with a seemingly straightforward question. What are you actually counting? It’s probably not one of those things you have ever thought of. You just do it – or put down some sort of random number that seems about right.
Jensen et al., when they were looking at the interobserver reliability of respiratory rate measurement in premature infants used ten different methods – visual and auscultatory – to determine the rate. In case you are wracking your brain to come up with ten, here they are…

Rather niftily they video recorded this 3 minute examination and then played it to a bunch of observers. When the examiners reviewed their recordings a couple of weeks later there was an excellent agreement with what they thought they saw at the time and what they saw on the tape (intraclass correlation coefficient (ICC) 0.84 CI 0.71-0.96). Unfortunately the ICC for the external observers ranged from a poor (0.22) to a fair (0.73) agreement. Visual cues, such as subcostal or suprasternal retractions or head bobbing, nasal flaring or thoraco-abdominal dysyncrony were more useful that the auditory cues.

This study used 12 second samples for each area examined. Isn’t it better to actually count for a whole minute? The WHO certainly think so. Because of the natural variability of respiratory rate it is possible for young infants to have a baseline rate of over 50 despite being perfectly normal if it is only measured on one occasion. As with all vital sign measurements it is the trend over time that is important. Is the rate going up, coming down, or staying constant? A one off reading every 4 hours cannot give you that information.

So what is normal?

Most of the charts that we use are based on PALS data but, according to Fleming et al, they are based on two textbooks that don’t even cite their sources. In these modern times of evidence based medicine, is that accurate enough for you? It wasn’t for them so they ran a systematic review and only found 20 studies looking at respiratory rate, totalling 3881 children. You can see the centile charts reproduced below. 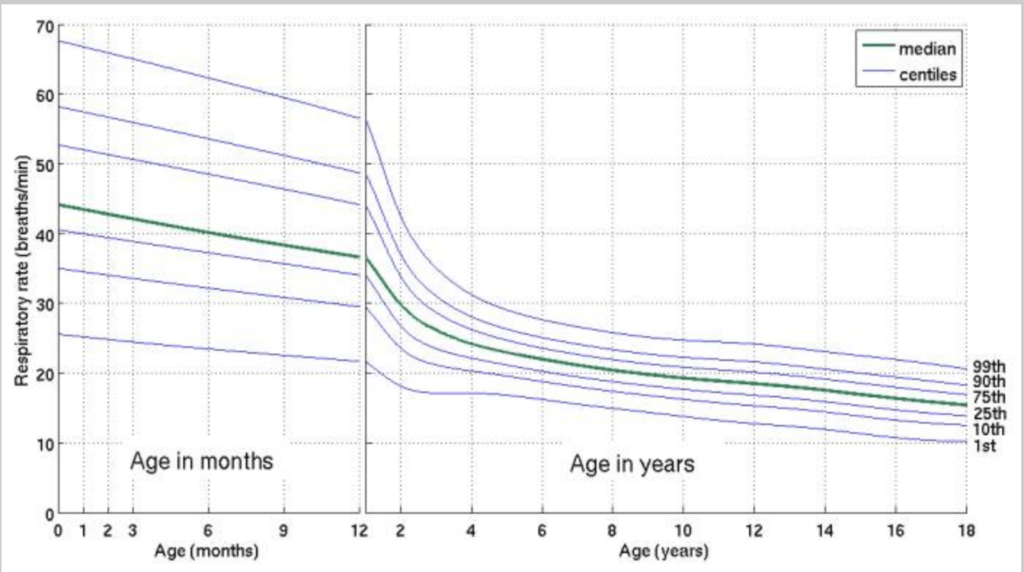 It’s quite clear that the rate really drops off after the first couple of years from a median of 44 breaths/minute to 26 breaths/minute. 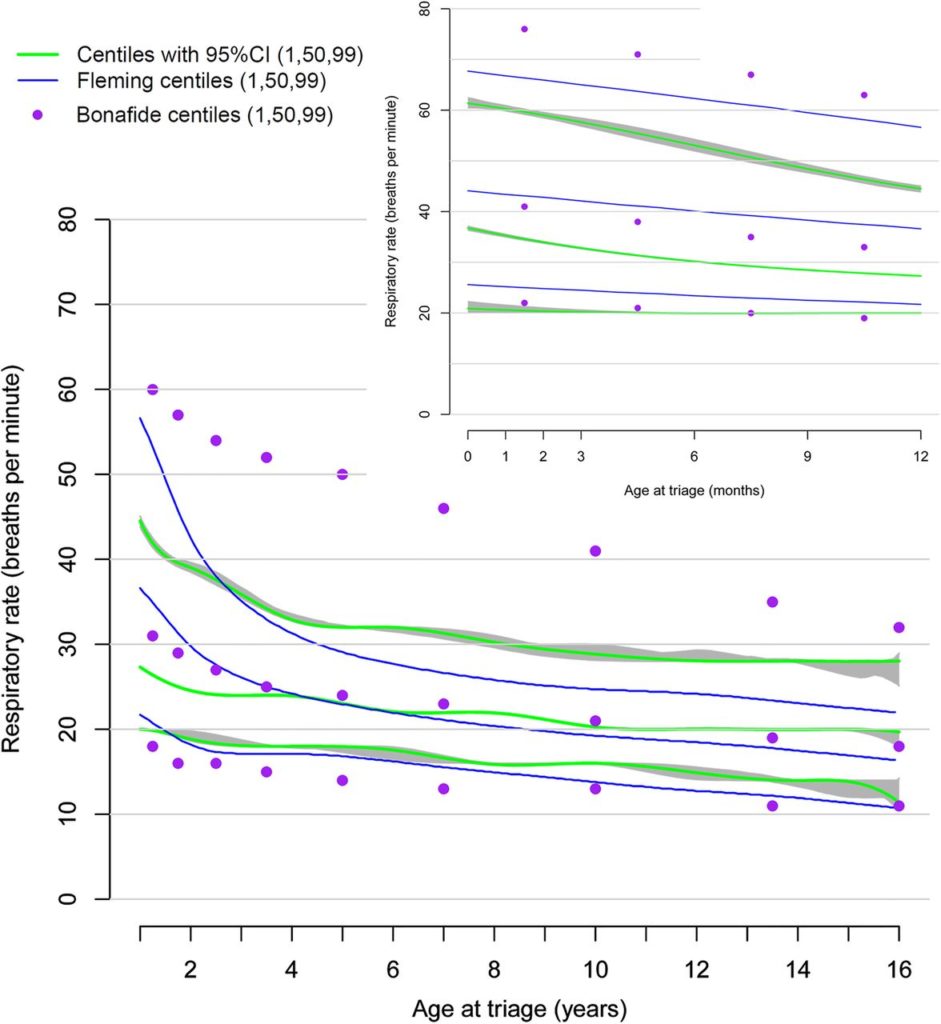 O’Leary et al. went a little further though than Flemings’ systematic review and looked at individual patient data for 111,696 encounters. Although this was a single centre study the number of data points is much greater by two orders of magnitude. They show that children under the age of three have a lower centile range than previously thought and that as a child gets older the centiles are higher than those suggested by the Fleming data set. It is worth taking a look at where your hospital gets its ‘normal observations’ from. The DFTB normal vital signs data are based on standard APLS values which are probably the least accurate with low provenance. The RCH normal physiological values are derived from the Bonafide data though they do recognise that differing datasets do exist. Unfortunately they then state that they have chosen these values because they are more representative of unwell children.

When you take a look at the studies you can see that the rate also depends on where the measurement is taken – in the emergency department, on the ward, or in the school classroom.

A number of psychological factors can also influence respiratory rate including fear, pain and apprehension.

The rise of the machines?

Instead of relying on a human observer we could use technology to capture and record respiratory rate. There are a number of proprietary devices that can be attached to measure respiratory rate, such as nasal ETCO2 monitors or nasal thermocouples. There is evidence, however, that just having such a device fixed to your face might artificially elevate the respiratory rate.

I’ve written before about the idea of using video reflectance photoplethysmogram. It is certainly within the boundaries of current technology to detect respiratory rate based on video footage and computer algorithms. Once this technology becomes more robust I can foresee a future when we might have a more accurate means of collecting patient physiologic data.

Electronic health records also have something going for them. They allow us to gather large volumes of data related to vital signs. Sepanski et al interrogated a large multi-centre database of records for 16 hospitals over a 4 year period.With over 1.2 million patient encounters they were able to create centile curves for respiratory rate by age and compare them with the traditionally used charts. They found that whilst the 50th centile data was similar to the O’Leary and PALS data, the 95th centile RR was 7-11 breaths higher than that from O’Leary. If your facility uses a paediatric early warning system it is worth considering exactly where the normal range data comes from.

So, what should you do?

Continue to include respiratory rate in your basic assessment of all children but be aware that it changes with time and circumstances.

Record the actual respiratory rate rather than guessing.

Try to measure over a minute if you can, rather than just 10 seconds.

If you are tracking rate over time (and you should), it should be performed by the same person to reduce inter-observer error.

Author: Andrew Tagg An Emergency Physician with a special interest in education and lifelong learning. When not drinking coffee and reading Batman comics he is playing with his children. He/Him @andrewjtagg | + Andrew Tagg | Andrew's DFTB posts
September 7, 2018 0