In this second post in an occasional series questioning some of the basics of paediatric assessment we are going to look at clinical markers of dehydration, something we have to look out for every single day in the department.

I can remember very little from my paediatric placement as a medical student (it was over 20 years ago now) except for one thing. I was taught that children who are dehydrated have decreased skin turgor, dry mucous membranes, delayed capillary refill time and an altered sensorium. Having spent some time looking into the validity of capillary refill time as an assessment tool I thought I should take a look at more of the other dogma I have been exposed to.

An accurate measurement of dehydration can be used to target therapy and potentially reduce morbidity, especially in children with acute gastroenteritis. Globally diarrheoal illness poses a huge healthcare burden with an astonishing 1.7 billion episodes estimated to occur each year leading to around 36 million admissions and over 700,000 deaths – about 10% of all child deaths worldwide (Ed. note – this latter figure is probably a gross under-representation). A number of methods of assessment and scales have come into being and so it is worth taking a look at some of the most frequently used. An accurate assessment of hydration status may impact on both the management and disposition of the child. Overestimation is potentially just as harmful as underestimation.

“He supposed that even in Hell, people got an occasional sip of water, if only so they could appreciate the full horror of unrequited thirst when it set in again.”

If we clinically assess a child just how good is the clinician’s gestalt?

It has been suggested that doctors are right about 75% of the time when picking mild dehydration (under about 3%) and found difficulty differentiating severe dehydration from more moderate dehydration. But then what is gestalt in this setting? It is really just a collection of impressions formed by one’s subconscious mind processing the history and focused clinical exam.

Is that any better than the parents guess?

A prospective observational trial of 132 children-parent dyads had a similar sensitivity of about 73% to predict 5% dehydration. Parents don’t have the same experience as physicians with regard to physical exam findings so were guided more by historical factors. Normal fluid intake and a history of normal urine output (normally the number of wet nappies) has a likelihood ratio of near zero so if both of these are present it is highly unlikely that the child is significantly dehydrated.

So what about skin turgor?

Turgor has been used to diagnose dehydration for over 50 years. When originally described by Laron in 1957 the examiner was supposed to pinch a small skin fold on the abdominal wall and watch for elastic recoil. Now most of us use the hand or forearm rather than the belly.  But in a similar way that there is a wide variety of normal for capillary refill times there is also a wide variation in elastic recoil and no true range has been documented.  Skin turgor and elastic recoil is, instead, classified into immediate, slightly delayed or prolonged. A number of conditions may falsely normalise (obesity, hypernatraemia) or prolong (malnutrition) the rate of recoil.

What about sunken eyes and dry mucous membranes?

They both add very little to clinical reasoning with a pooled positive likelihood ratio of only 1.7.

And was my mother right when she told me I had to drink water as my wee was too dark?

There is something in this not-so-old wive’s tale. Uosm increases in response to dehydration but there is no international consensus for what Uosm cut-off indicates dehydration. Though 800 mOsm/kg seems to be used most often, be wary as this level may depend on another of other factors including dietary intake. Urine colour has a strong relationship with urine osmolarity (Uosm). Urine colour has been validated as a biomarker for dehydration status in adults and in children over 8 years of age. A bedside 8-point urine colour chart has been developed and although it may detect dehydration it is not very specific for degree. Other urinary indices such as specific gravity, and urine ketone levels show no correlation with presence or absence of significant dehydration.

Some people have even tried serial use of a hand-held bladder scanner in lieu of bedside ultrasound  to assess for urine production but this has little utility in the real world.

So how do we actually know the percentage of dehydration?

Most studies use percentage of body weight lost as the “gold standard“. Unless a child has been weighed recently, parents may be wildly inaccurate in their predictions. By comparing their weight when they are well (in the post-illness phase), with their presenting weight, researchers can categorise percentage of dehydration.

Is it even clinically relevant?

Whilst individual signs and symptoms are of low sensitivity, when combined they may become a much more powerful. There are lots of dehydration scales to choose from.

International authorities suggest breaking dehydration down into three simple categories based on presentation: no dehydration; some dehydration; or severe dehydration. Only those in the severe group should be considered for IV fluid hydration.  Given that diarrhoeal illness is much more of a concern in resource poor settings the World Health Organisation (WHO) Integrated Management of Childhood Illness (IMCI) guidelines suggest a combination of signs and symptoms to help differentiate degrees of dehydration.
Such scales need to be easy to use both by nurses and non-physician healthcare workers and be easily reproducible.

The Clinical Dehydration scale was originally created using a cohort of 137 children with gastroenteritis and has undergone a degree of prospective external validation. The earlier studies involved very few children with more severe dehydration and made no mention of inter-observer reliability of the scale. Larger studies have shown little correlation between CDS and percentage weight gain in the recovery period, a proxy measure for dehydration status. With this in mind it should probably be not used to guide treatment

As you can see above it utilizes four key examination findings: the presence or absence of tears; the state of the mucous membranes; whether the eyes are sunken or not; and finally the very ephemeral general appearance of the child. Again each item on its own has little value but combined had a sensitivity of around 68%.
There is a moderate degree of inter-observer reliability with a Κ of 0.52.

The WHO dehydration scale

Rather than being evidence-based, the WHO scale was largely derived from expert opinion and a number of studies have found it to be inaccurate.

This scale was based on analysis of just 64 kids and found that four key variables – prolonged capillary refill time >2 seconds, dry mucous membranes, absence of tears and unwell appearance combined seemed to be the best predictor of clinically significant dehydration. You might notice that this sounds very similar to the clinical dehydration scale. 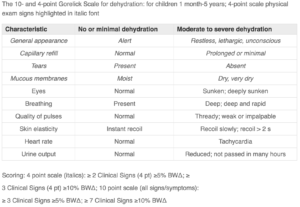 Like many in search of a catchy acronym the group in Dhaka, Bangladesh, settled on the DeHydration: Assessing Kids Accurately (DHAKA) scale. Recursive partitioning and logistic regression were used to create the scale

A number of other scales exist including the Vesikari and modified Vesikari score.

So which is best?

Pringle et al. did a small study in resource poor environments comparing the CDS, Gorelick and WHO scales. Having enrolled seventy-three children, 52 were available for analysis after deaths and drop outs. Here are the sensitivity values for detecting moderate dehydration.

Ultrasound has been used with varying degrees of success to determine fluid responsiveness in an adult population  and although measurement of  inferior vena cava (IVC) diameter and aorta-to-IVC ratio has shown some promise a systematic review earlier this year has thrown this into doubt.  Even the cooly named BUDDY study (Bedside Ultrasound to Detect Dehydration in Youth) showed little correlation between level of dehydration and inspiratory collapse of the IVC (in spontaneously breathing patients).

Anything fancier in the works?

Bio-impedence monitoring may be even more accurate (think of those fancy scales you can buy) to assess total body water content but you still need an accurate baseline in order to determine degree of dehydration.

In reading through all of these papers I am once again struck by the heterogeneity of the studies and the low number of study participants involved.  We have been basing our practice on studies with very little external validation and with less than 200 patients involved. As I highlighted at the start of the article, I was given a rubric for the clinical assessment of dehydration that has been held up as the standard throughout my time in practice and I’m not sure if I should continue.

So with all of that in mind, what should we do?

No one individual clinical sign can accurately predict either the presence or the degree of dehydration and used in combination, in the form of a dehydration scale, we are no closer to an answer. It seems that my gestalt is probably as accurate as any particular scale.

If you are only going to read one article then read this first one from JAMA. It’s an oldie but a goody.

Vega RM, Avner JR. A prospective study of the usefulness of clinical and laboratory parameters for predicting percentage of dehydration in children. Pediatric emergency care. 1997 Jun 1;13(3):179-82.

Porter SC, Fleisher GR, Kohane IS, Mandl KD. The value of parental report for diagnosis and management of dehydration in the emergency department. Annals of emergency medicine. 2003 Feb 28;41(2):196-205.

Gorelick MH, Shaw KN, Murphy KO. Validity and reliability of clinical signs in the diagnosis of dehydration in children. Pediatrics. 1997 May 1;99(5):e6-.