Having flown 16,893 kilometres to visit family, a short hop over the Berlin was nothing. This year Tessa and I were honoured to be able to help out with SMACCmini – the paediatric workshop before the main event.  DasSMACC is the second-most* anticipated conference of the year and we wanted to make sure the delegates left better able to look after critically unwell children.

The workshop took place in the stylish Scandic Hotel – home for a number of the pre-conference workshops.

Each talk could be a blogpost in itself but fortunately they were all recorded for later release on-line. Here were some of the mornings highlights…

After campaigning for some time to run a #SMACCmicro and #SMACCnano workshop we thought we should give Hazel the opportunity to improve everyones ability to look after the smallest of patients.  After getting us to challenge our perceptions of what equates prematurity she named our fear – babies, especially tiny ones. But just like in a standard paediatric resuscitation we should still concentrate on the A, B and C approach. Last year, Trish Woods spoke about some of the basic principles of neonatal airway management. A basic airway manoeuvre and miniscule inflation breath for those lungs that have never been inflated is all that is required – a challenge if you are handed a 250ml Ambu-Bag and, at least, they do have one thing going for them – easy central access. Once those three critical elements of care have taken place then the rest is window dressing until the specialists arrive. 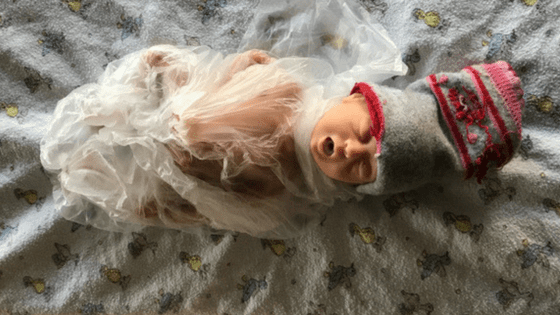 A (clean) sock and an unused bin bag turn the scariest of premature babies into a well-loved Dobby, safe from the dangers of rapid heat loss.

If you want to know more about the survival rates for premature infants then take a look at the Epicure website.

David Krieser – So, you think you can dance? Playful and purposeful clinical skills

David, director of Paediatric Emergency Medicine at Sunshine Hospital (and my boss), kindly stepped in at the last minute to fill a gap in the program. Reflecting on the diverse population he serves he took us through a well choreographed paediatric examination that looks slick and scores a clear 10 from the judges. You’ll be able to see more of David at #DFTB17.

A larger part of the audience where not paediatricians by trade. Heather Murray, an emergency physician from Kingston, Ontario, before writing her talk, represented a lot of us. Her hospital may see 120 adult presentations of diabetic ketoacidosis over a single year but only 5 cases of paediatric DKA. Taking us through the potential snakes – cerebral oedema and hypokalaemia and rescue ladders – formal guidelines, FOAMed and simulation – she argued the case for universal paediatric guidelines. In a province where nearly every hospital has it’s own set of guidelines the TREKK.ca project helps to provide resources for clinicians dealing with familiar, and unfamiliar conditions.

The key message that I took home from Heather’s talk though was of the need to rehearse managing these patients, even if just as a paper exercise, so that all staff become familiar with what you are going to ask for.  I’m sure most of you can remember the last time you simulated a “Cannot Intubate, Cannot Oxygenate” scenario but we know that these events are truly rare in real life. Wouldn’t our energies be better spent simulating and rehearsing our management on higher frequency conditions such as DKA or paediatric sepsis? 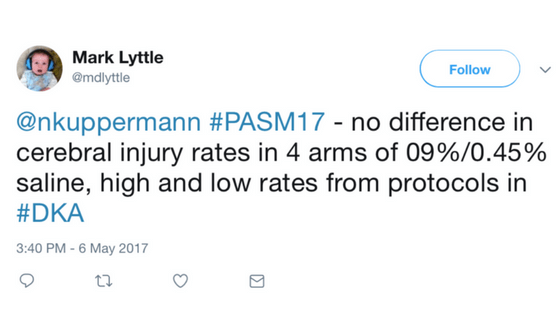 Heather also included this gem of a tweet in her talk regarding the PECARN DKA fluid study data. Perhaps we do not need to get as worked up with our choice of fluids as we once thought?  We’ll be sure to scrutinise it once the data hits the press.

Timo, a physician assistant from Utrecht, took us through the case of Emma, a young girl that he was there for the birth of but also for the death of five years later. In a country where routine termination options are discussed with parents who have conceived a fetus with a severe cardiac abnormality Emma’s parents made the brave decision to give her a life – albeit a short one.

The classical three stage procedure of Norwood/Glenn/Fontan has an inevitable outcome but what happens if that child arrests in the immediate post-operative period? Surely they might have a fixable problem – a haemothorax, a clot? Timo talked us through the very limited data, as well as his experience of performing chest:abdominal compressions in order to maintain an output.

It’s always a pleasure to watch Ross perform. I was lucky to have access to his slide set before the event and got a glimpse into his approach to slide design.  But as he would say, it’s not all about the fancy transitions but a good presentation is the product of the story, the supporting media and the delivery.

He challenged the audience to think of three reasons that they were not like surgeons, before going on to remind us that we all have our inherent biases, or cognitive dispositions to respond. 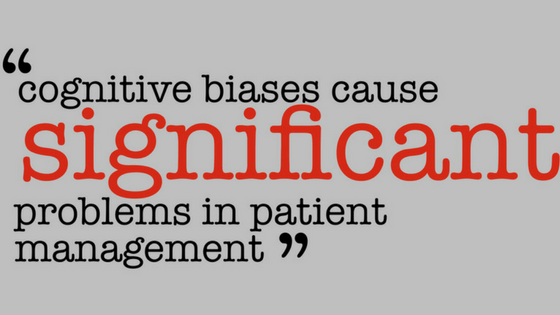 Once a problem is identified a clean solution doesn’t always present itself. We can become paralysed looking for an elegant fix but sometimes it doesn’t exist. Any solution, even a clumsy one, might be the answer. If you want to know more about wicked problems then take a look here.

After a break for coffee and cake it was time for another two hours of awesomeness.

Last year at #SMACCDub Michele spoke about how the usual resuscitative procedures can kill critical cardiac patients. This year the paediatric cardiac intensivist from Orange County let us into her world, a world where sick septic children may be put on ECMO. With advances in technology and increasing experience what used to be a limitation is no longer considered as such. From children with newly diagnosed cancers to those with severe sepsis, the indications for sepsis in children is rising rapidly. Starting with data from MaClaren et al. she pointed out that refractory septic shock may not be a contraindication to cannulation and ECMO. 47% of patients in this (admittedly) small study survived to hospital discharge. These kids were not put on peripheral ECMO but the surgeons were actually opening up the chest and cannulating them centrally allowing them to give higher flow rates  possibly hastening the resolution of their illness.

Given that the majority of us work in centres where ECMO is just not an option it was fascinating to hear of the potential for this therapy. I would have loved to have got into a decision regarding use of such a treatment in a post-Obamacare US and the ethics of denying what could be an experimental treatment for some children with life threatening illness.

We know how to intubate adults. We hear about it all the time – at conferences, in podcasts, on blogs – but how often do we consider the challenges of intubating children, and young ones at that. Starting at a cellular level (Charles was the first person to make histopathology actually relevant for me) before pulling back to give the bigger picture.  Once we understand some of the basics of the immature system – the biochemistry and physiology – we can anticipate and mitigate against some of the challenges that might face us. Children are at particular risk during four key stages of the induction process. Beginning with sedation and the risks of medication in a slowly circulating system he moved through the risks of paralysis, laryngoscopy and the oft-forgotten post-intubation phase.

Those children we see in the emergency department or ICU do not have normal physiology and so we can try to correct for that in our induction technique. As any parent will tell you, though, children do not follow the rules and so prescriptive rules and doses should be tailored to the individual situation. Listen out for the release of the podcast for more.

Putting a piece of plastic in a kids airway should be easy. But we know from studies out of Melbourne that we don’t do it that often. And when we do we are not as good at as we should be. We know that we are not as good at intubating children outside of the theatre environment as we are at intubating adults. But data from the APRICOT ( Anaesthesia PRactice In Children: Observational Trial) study showed that anaesthetists are not infallible either, with respiratory critical events occurring in 3.1% of routine cases in Europe. 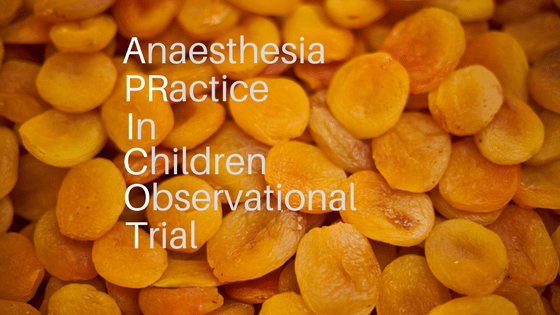 Natalie May – It’s not okay: Culture, communication and conversations in critical care

Despite a minor technical glitch Nat remained calm and really helped provide a voice for the unspoken voices, arguably the most important voices, in the room. I won’t spoil her message but you can read all about it over on St Emlyn’s.

For the final session of the morning, Johnny Millar, an intensivist from Melbourne, spoke of, perhaps, the hardest thing we have to do – make an actual decision. He spoke of the challenges of being a senior clinician – someone expected to make the right decision – every time. And he gave us  framework to reflect upon whenever we are asked to make a decision. 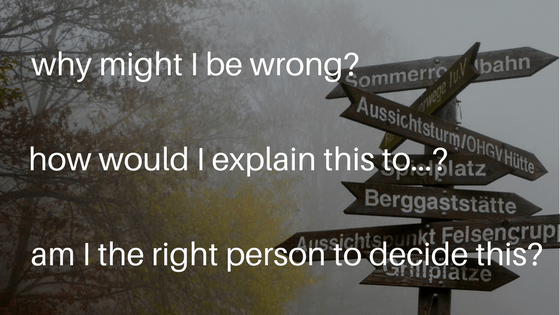 These are powerful questions to ask when making these potentially life altering decisions. The cynical amongst you might think “How might explain this to… the coroner?” but perhaps it would be better to have a trusted mentor in mind, someone you look up to, someone who would give you honest feedback.

Of course, we couldn’t have done any of this without the faith of Chris Nickson, Oli Flower and Roger Harris. On a more practical level I’d like to express my heartfelt thanks to Tessa Davis, Nat May, Tim Horeczko (sorely missed) and Tom Rozen. Finally, I must save my largest heap of gratitude for my wife, Tess, for allowing me to come whilst she stayed with the girls.

*Obviously the most anticipated conference is DFTB17!