Sam, a 9-day old boy, is rushed into the paediatric emergency room by his distraught parents.  Bright red blood is soaking through the front of his cloth nappy.

What is a bris?

A brit milah, or bris, is the traditional Jewish circumcision ceremony that usually takes place on the 8th day of life.  It is carried out by a mohel. The mohel may not be a medical practitioner.  Followers of Islam are also circumcised (Khitan) though there is no prescribed time after birth in which must take place as long as it is before the age of 10. 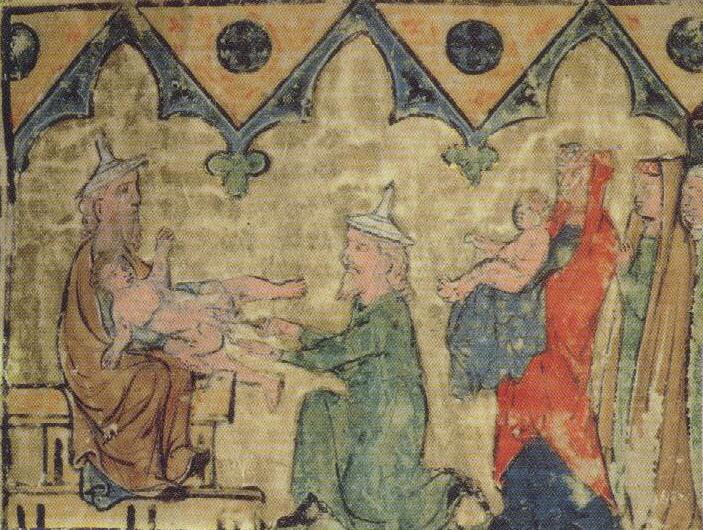 What proportion of newborn boys are circumcised?

Whilst a number of religions including Islam and Judaism require newborn boys to be circumcised the proportion of boys that undergo the procedure is declining.  Currently, about 10-20% of boys born in Australia and less than 10% in New Zealand are circumcised.

The Royal Australasian College of Physicians’ policy statement on male circumcision states that “there is no evidence that the benefits outweigh the risk of the procedure”. The American Academy of Pediatrics holds the opposite view.

Other than religious reasons, why might a boy be circumcised?

A 2009 Cochrane meta-analysis found that male circumcision in sub-Saharan Africa reduced male-to-female rates of HIV transmission by 36-66%. Males who have been circumcised are unlikely to pass on HPV to their partners in life and will not get skin cancer of the penis.

Are there any contraindications to circumcision?

It is generally contraindicated if there is any genital developmental abnormality such as hypo- or epispadias or if the patient has ambiguous genitalia.  It is also not recommended in the children of parents with haemophilia until the child has been tested. It goes without saying that it should not be performed on the sick or jaundiced infant either.

What are the possible acute complications of such a circumcision and how would you treat them?

Complications occur following approximately 1 in 500 procedures. The tip of the penis is often crusted and inflamed. Sucrose should be used prior to the removal of the dressing in the neonate.

If there is profuse bleeding this may be a marker of an underlying coagulopathy and so should be tested for.  Bleeding may be due to a snipped vessel or localized inflammation/infection.  Direct pressure with a surgical dressing such as Kaltostat should halt the bleeding. Very rarely a single suture is needed to tie off a bleeding vessel.

Should there be any cellulitis to the penis in the neonate then they should be admitted for IV antibiotics.

Once the nappy was removed it was obvious that there was active bleeding to the area where the foreskin had been removed.  After giving some sucrose the vaseline gauze dressing was removed and a bleeding point identified.  When the application of a surgical dressing failed to stop the bleeding a penile block was placed and a single stitch tied off the guilty blood vessel. The clotting profile was normal and Sam was discharged to follow up with his primary care provider.