Most of us consider sex as a black or white issue. You are either male or female. But the truth is not as simple as that. The development of sexual characteristis lies on a spectrum. The arbitrary terms of male or female are a human definition rather than a natural one. A person may be born appearing to be mostly male on the outside but with female-typical anatomy on the inside. They may be born with genitalia that seem to fall in between norms e.g. a boy with a very small penis or divided scrotum with appearance of labia. Or they may be born with mosaic genetics so that some cells comprise of XX chromosomes and some XY. Intersex may be apparent at birth but it is often not until puberty, or occasionally later into adulthood via infertility clinics, that it becomes manifest. 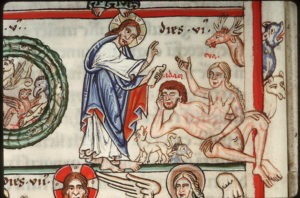 Intersex does away with the myth of the  gender binary as classically depicted by Adam and Eve. Perhaps it is also better to move away from the term “normal” to describe genitalia. One German study looked at a group of 500 men and found that urologists would only label 55% as ‘normal’ according to medical standards. 225 of the 500 had a degree of hypospadias. This makes the idea that the tip of the glans is the normal spot for the urethra to open questionable.

The Australian Human Rights Commission in Surgery on Intersex Infants and Human Rights (2009) uses the term ‘intersex’ as an umbrella term to describe people who are not born, or do not develop, as exclusively male or female

The formation of usual reproductive anatomy

Intersex is distinct from sex, sexual orientation or gender identity. To simplify things it is worthwhile considering the development of normal reproductive anatomy. Seven weeks after conception the internal and external embryonic genitalia are identical. This excellent video from Armando Hasudungan may make things more clear.

Biological sex is determined by many things then – the  number and type of sex chromosomes, the presence of ovaries or testes, sex hormones, internal reproductive anatomy and what we see on the outside. A change in any of these may characterize someone as intersex.

How common is it?

With a wide variety of potential definitions it is hard to determine how common intersex is. If you just include children with obviously atypical genitalia then the figure is about 1 in 1500 to 1 in 2000 live births. Some conditions, such as congenital adrenal hyperplasia or androgen insensitivity syndrome may lead to ambiguous genitalia from birth. Some may only be evident due to failure of usual puberty and some, such as hypospadias, may be misdiagnosed as non-intersex conditions. Less conservative estimates place intersex as occurring in around 1.7% of live births. To put this in context, the incidence of red hair at birth is between 1 and 2%.  In 2008 a voluntary registry, the I-DSD was set up to help improve data capture.

What sort of conditions may lead to intersex?

In 2006 a group of clinicians in Chicago replaced the term intersex with “Disorders of Sexual Development”, or DSD, in the “Summary of Consensus Statement on Intersex Disorders and Their Management”. The concern is that this term reinforced the idea that being intersex is a disorder that needs to be fixed rather than a normal variant and returned to a more paternalistic model of care rather than one that encompassed shared decision making. Some of the community prefer the term intersex as a term that promotes equality and decreases marginalisation.  One must consider that intersex activists may represent the vocal minority. Other terms used include differences of sex development and variances of sex development.

DSD and the DSM

The fifth edition of the Diagnostic and Statistical Manual of Mental Disorders (American Psychiatric Association, 2013) also renames intersex as a Disorder of Sexual Development and a subset of Gender Dysphoria. This reclassification increases, rather than decreases as was the aim, the risk of stigmatisation and marginalisation.

Blackless M, Charuvastra A, Derryck A, Fausto-Sterling A, Lauzanne K, Lee E. How sexually dimorphic are we? Review and synthesis. American Journal of Human Biology. 2000 Mar 1;12(2):151-66.

Author: Andrew Tagg An Emergency Physician with a special interest in education and lifelong learning. When not drinking coffee and reading Batman comics he is playing with his children. He/Him @andrewjtagg | + Andrew Tagg | Andrew's DFTB posts
September 5, 2016 0