A 5-year-old boy, Kayden, is brought in by his mother as she is concerned that there is something wrong with his penis – every time he tries to pass urine it balloons in his foreskin and goes all over the floor.

A non-retractile foreskin is the norm in neonates and may be present in 60% of boys under one year of age.  By 4 years of age, 90% of boys are able to retract their foreskin. The majority of cases that present to either primary care or the emergency department are physiological phimosis.  True phimosis is caused by forcible retraction of the foreskin leading to a tight circular band of scar tissue.  Some studies suggest an increased incidence of balanitis xerotica obliterans (BXO). 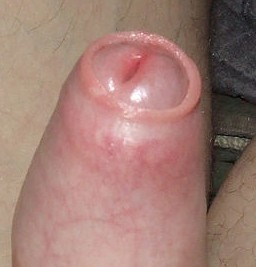 When is phimosis a problem?

How do you treat phimosis?

Application of 0.05% betamethasone ointment bd applied to the tip of the foreskin for 4-6 weeks reduces localized inflammation and helps loosen any inner preputial adhesions from the underlying tissue thus making it easier to retract.  The majority of children with phimosis will not need any surgical intervention.  Children with BXO may be referred early for circumcision though it may recur.

When the foreskin is left in the pulled back position it can impair venous return from the glans leading to oedema. This may lead to ischaemia and necrosis if left untreated.  It is commonly related to previous phimosis where a ring of tough fibrous scar tissue forms around the foreskin.  Whilst its presentation is usually obvious do not forget to consider the diagnosis of a hair tourniquet. 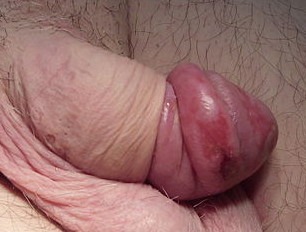 How do you treat paraphimosis?

The foreskin should be returned to its normal position as quickly as possible. The pain should be relieved with parenteral/intranasal analgesia.  Often lignocaine jelly (similar to that used for catheterisation) is enough to numb the pain whilst an ice pack is applied to help reduce oedema. Once these have had ten minutes to work use the thumb of your dominant hand to push down on the glans whilst sliding the foreskin back in place. If this does not work a flexible, self-adhering bandage may be used to compress oedema.

What surgical options are available?

In the majority of occasions, the simple measures described above should be effective for returning the foreskin to its natural position. For completeness sake, it is worth being aware of some of the surgical options available but these should only be carried out by experienced practitioners. For the older child, it may be necessary to perform a penile block (under sedation) in order to aid reduction.  More brutal surgical techniques have been described, including multiple punctures of the glans to reduce oedema or performing a dorsal slit (cutting the fibrous ring of tissue).  The child should then be referred to a paediatric surgeon for consideration for circumcision as a later date.

How can I remember which is which?

PARAchutes come down and so does the foreskin in PARAphimosis.

Balanitis may be either

A penile skin swab is not needed as the majority of cases clear up with empiric treatment.

How can it be treated?

Most cases of balanitis are irritant in origin and respond well to simple measures.  It can be tough to distinguish between irritant and infective forms and so treatment may need to be escalated if simple hygiene methods fail. If the symptoms are not improving after 7 days then a penile skin swab should be taken

Children with recurrent or chronic balanitis should be referred to a paediatrician or a dermatologist.

Kayden is diagnosed with phimosis and is prescribed four weeks of topic steroid cream.  When he is seen for another matter a month later you enquire as to his problem and find that he no longer misses his target.

Anomalies of the Penis and Urethrabalanitisparaphimosisphimosis