Home > View All > Passing the TORCH

6 year old Ella has been sent home from school as she has been itching all day.  When her mum, Val, picked her up she noticed a few spots and thought she better get them checked out.  You see the classical rash of chickenpox and reassure of the relatively benign nature of the illness and discourage her from holding any ‘chickenpox parties’.  As you explain that it would be wise to keep her away from babies, the immunocompromised and pregnant women, Val pauses, looks up at you and says, “I’m 15 weeks pregnant!”.

What diseases do pregnant women have to be especially careful of exposure to? 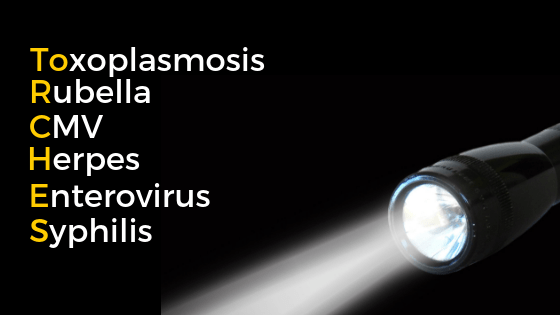 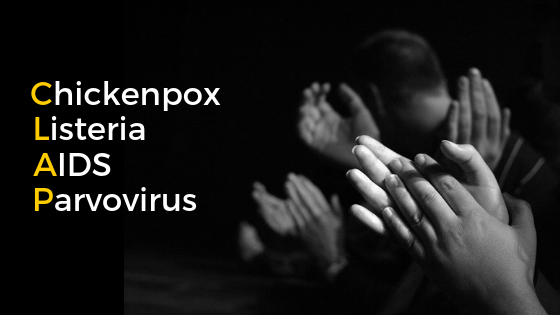 How are these diseases passed on to the newborn?

Vertical transmission from mother to child can occur via a number of routes. The fetus does not begin to make IgM until after 20 weeks gestation so it must rely on maternally derived IgG via the placenta as IgM does not pass through the placenta.

Infection is transmitted, via haematogenous spread, through the placenta to the fetus.  Whilst the mother may be asymptomatic or only show mild symptoms the effects on the unborn child can vary between malformation, growth restriction or developmental delay, premature labour or even death in utero.  The classic disease to think of in this case is congenital rubella syndrome.

Whilst the risk is low infection can occur during intrauterine sampling or instrumentation. The most common organisms involved are skin flora.

Rarely infection can ascend from the vagina.  Whilst the polymicrobial vaginal flora is generally of low pathogenicity women are common swabbed for Group B Streptococcus. The risks of GBS will be covered in a later post.

The vaginal bacterial milieu usually produces an asymptomatic immune response that may eventually lead to chorioamnionitis in the mother and, potentially, umbilical vasculitis and funisitis in the fetus.

These infections that occur at the time of delivery as the child comes into contact with infective lesions or blood.  Other than GBS we are most concerned about HIV, HSV and the hepatidides.  Preventative strategies including elective Caesareans are highly effective.

A number of diseases have been shown to be passed on via breast milk including the bacterial infections caused by GBS, listeria and coxiella.  There are also a number of reports of HIV, CMV, HBV, HSV and rubella all being passed on to the breast-feeding infant.

Information on all of these diseases (and more) can be found in this excellent resource from the Australasian Society for Infectious Diseases. It contains useful algorithms for maternal and fetal diagnosis as well as interventions required.

So let’s start with toxoplasmosis…

Although the first in the mnemonic, it is one of the rare causes of perinatal or congenital infections, potentially passed on from raw or undercooked meat and handling cat faeces.   Although it may be asymptomatic in the mother, one might think that the single celled parasite might have more of an effect on our behaviour than we think. The classical tetrad in the neonate is of chorioretinitis, microcephaly or hydrocephalus, convulsions and intracranial calcification. The child may also look like a blueberry muffin due to cutaneous erythropoeisis.

Moving on to rubella…

The risk of fetal transmission may be due to primary infection or due to secondary reinfection.  As the incidence of MMR vaccination decreases the risk of congenital rubella may be on the rise though the cohort of patients affected have not reached a peak as yet. Around 10% of Australian women are at risk due to lack of vaccination, vaccine failure or waning of immunity.

The risk of congenital defects is much higher if maternal infection and transmission occurs during those important few weeks of organogenesis in the first trimester, with infection after 20 weeks being very rarely associated with congenital rubella syndrome.  Congenital Rubella Syndrome (CRS) was first described by Sydney-born opthalmologist Sir Norman Gregg.  The myriad manifestations of congenital rubella syndrome are beyond the scope of this post but if you want on know more then check out the original 1941 paper. 9 cases of CRS have been reported in Australia since 2002.

CMV is the leading cause of congenital infections at a rate of 7 in a 1000 live births worldwide.  In Australia, the incidence is around 4 per 100, 000 births.  Whilst primary CMV infections carry a 30% risk of transmission, only about 1% of cases of reactivation of the virus are transmitted to the fetus.  Of these the vast majority lead to an asymptomatic newborn.

The risks of congenital CMV are partly related to the trimester in which it is transmitted.  In the first trimester it is linked with early mortality as well as neurological sequelae – microcephaly, seizures, chorioretinitis or developmental delay.  In the second half of pregnancy other disorders might predominate such as hepatitis, pneumonia or severe thrombocytopaenia.  Asymptomatic congenital CMV is also linked with an increased incidence of sensorineural hearing loss. Around half of these will be picked up at the newborn hearing screen.

If herpetic lesions are present in the genital tract at the time of delivery then the risk of transmission is between 1-3%. The risk is much higher for recurrent HSV-1 infections (15%) than for recurrent HSV-2 infections (<0.01%). The vast majority of these infections are acquired at the time of birth though intrauterine infections do occur. It makes sense then that delivery by Caesarean section reduces the risk of transmission and intervention via the genital tract, especially the use of monitoring devices such as scalp electrodes increases the risk.

Antiviral therapy in the later stages of pregnancy may help reduce viral load and viral shedding but the effects of such pharmacological measures on the newborn are unknown.

In adults the majority of infections are benign and self-limiting. They may experience a sore throat and flu-like illness with fever and rarely diarrhoea.

In neonates there is an even more varied spread of symptoms from fever and irritability with poor feeding to multisystem disease with respiratory and GI symptoms coupled with the potential for developing myocarditis or meningoencephalitis.

And the rarely seen, syphilis…

Congenital syphilis (caused by Treponema pallidum) was once the scourge of the western world and subjects were a source of fascination for physicians who all seemed to want an eponymous sign names after them (‘Hutchinson’s triad, Du Bois’s sign, Higoumenakis sign – look them up) that would make it easy for the likes of Sherlock Holmes to make a spot diagnosis.

Thankfully cases are now rare in the developed world and it is unlikely that many of us would see a case in our careers.

Whereas maternal transmission or exposure to syphilis is very rare in the modern world, the same cannot be said of varicella zoster or chickenpox.  If the mother has had chickenpox herself or has been immunized then there is no risk of fetal transmission. If this is uncertain then she should have VZV serology sent. If this is positive it indicates prior exposure and there is no need for further intervention. If she has been exposed within the previous 96 hours (4 days) or results will take longer than 4 days to come back then she should receive ZIG (Zoster ImmunoGlobulin) and should be counselled to seek medical input should she develop chickenpox.

If there is a risk of fetal varicella syndrome through maternal exposure and infection then the mother should be referred to a fetomaternal specialist for further input.

Should she develop chickenpox in the week prior to delivery then the infant should also receive ZIG, ideally within 24 hours of birth. Breast feeding should be encouraged. Early transmission (prior to 20 weeks) may cause a number of birth defects including skin scarring and limb hypoplasia whereas later transmission near term is more likely to lead to severe post-natal infection.

Pregnant women often bemoan the dietary restrictions placed on them.  They are supposed to avoid soft cheeses, pate, cold meats and sausages as well as soft serve ice cream because of the risk of listeriosis.  Pregnant women with an acute listeria infection appear unwell with a febrile, flu-like illness.It is diagnosed on blood culture as well as with gram stains/cultures of the genital tract. Although rare in Australia (0.3 per 100,000 population) the incidence is much higher in pregnant women than any other population group. Unfortunately it is more likely to be transmitted to the fetus later in pregnancy and has a very high mortality – up to 50%.

If a woman grows L. monocytogenes in her cultures she should receive high-dose antibiotics (2g amoxicillin q4 hourly) for up to 14 days.

The neonate with congenital listeriosis may be septic with granulomatosis infantiseptica – a collection of granulomata on the cord, placenta or pharynx as well as on the skin. Listeria also causes pneumonitis and neonatal conjunctivitis.  All such infants should receive a standard septic work up as well as empiric antibiotics.

We won’t dwell too long on AIDS here…

Management of the HIV positive woman who is pregnant is a specialist topic in itself and so is best managed in a specialist centre. If the disease is well controlled with Highly Active, Anti-Retroviral Therapy (HAART) then the mother may be able to have a vaginal delivery.  As HIV may be passed though breast milk these mothers should use formula feeds to reduce the risk of mother-to-child transmission.  This has implications in a resource poor setting.

And finally, parvovirus B19

Around 40% of pregnant women are susceptible to parvovirus infection with an individual’s risk being between 8 and 20%.  Maternal infection can raise the risk of fetal death in utero to 10% above the baseline with a further 3% of fetuses developing hydrops but less than 1% developing congenital abnormalities.

When counselling pregnant women that have been exposed they need to know that they have around a 0.4-1% risk of excess fetal death.  If they have a proven infection (via serological testing) this jumps to around a 10% risk.

As with all infectious diseases, prevention is better than cure with good hand hygiene being the first step as well as immunisation.

Val was lucky enough not to have chickenpox as a child. Given that her exposure is current and she shows no sign of infection herself you arrange for her to have ZIG. She hangs around in the paediatric department for an hour or so after the injection to watch for adverse effects. Nothing untoward happens and she takes Ella home, to stay off school until the last vesicle has scabbed over. Prior to discharge you advise her to present should she, herself, develop any signs of chickenpox.

Infections of the Neonatal Infantinfectious