Home > View All > How to be an LGBTQIA+ young persons ally

How to be an LGBTQIA+ young persons ally

You know what the rainbow symbol is, right? It’s become synonymous with LGBT+ identity, solidarity and support and from Pride week to day-to-day living you’re likely to spot one fairly regularly. But, you probably also know that LGBT+ people are a minority group within our society, with huge inequalities in provision of healthcare, which is tragic given that this group have huge healthcare needs. As a step towards tackling this, national health services like the NHS and HSE (Ireland’s health service) have incorporated the rainbow with their logos and put them on a pin to show that the wearer is an LGBT+ ally, someone who an LGBT+ person can feel comfortable talking to about issues relating to sexuality or gender identity, someone who will listen to them with respect, someone who’ll create a safe space for discussion. 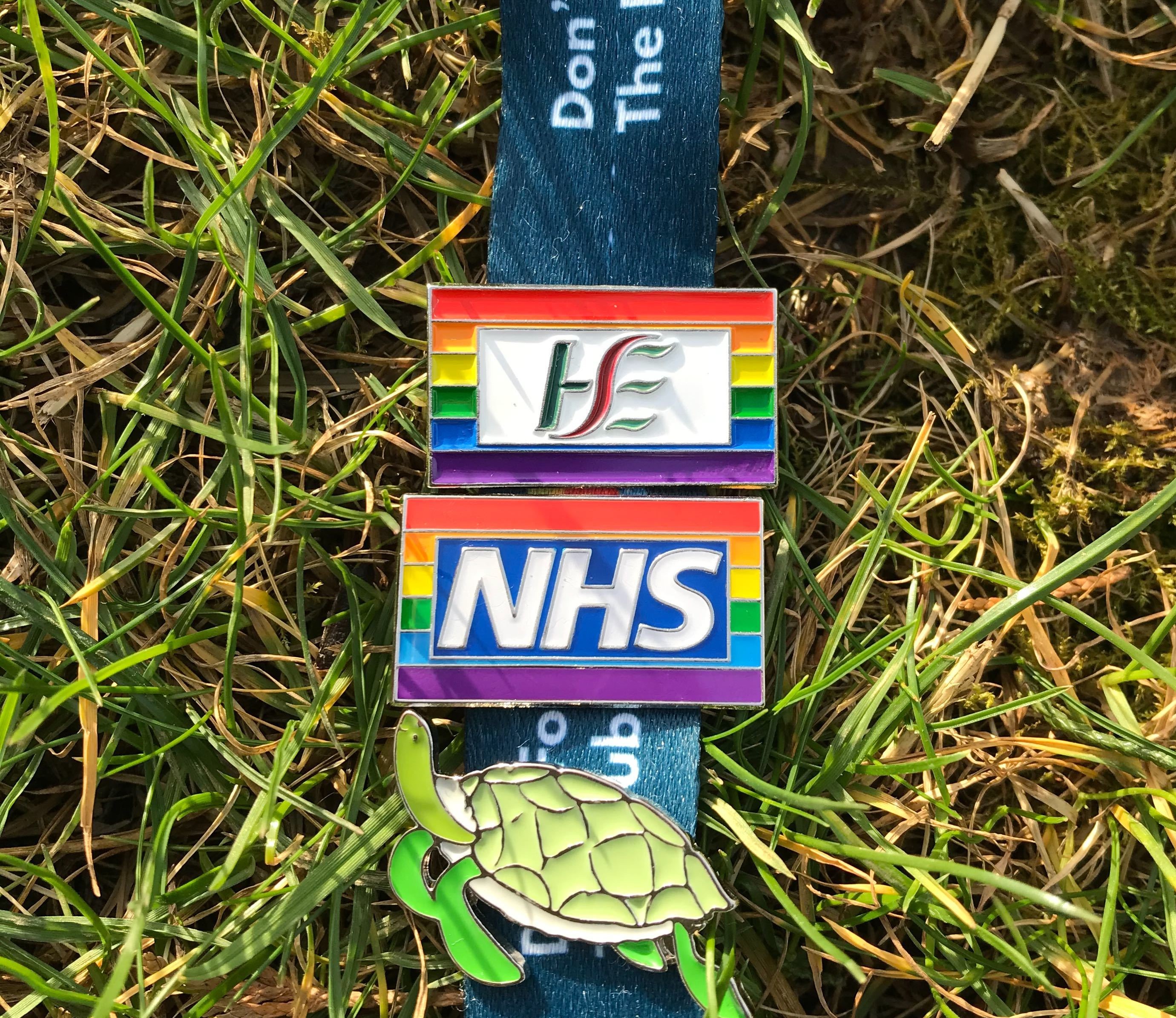 If you’re reading this post, you’re probably an advocate for LGBT+ rights. You might even have an NHS or HSE rainbow badge. Great! But wearing a badge is only one step towards being an ally. The wearer must feel confident that they will treat the young person with respect and that they’ll know what to do if a young person discloses to them. The wearer may be the first person a young person has ever felt confident enough to open up to about how they feel; it may be one of the most important moments of that LGBT+ young person’s life.

So, how can you be an LGBT+ young person’s ally?

You don’t need a rainbow badge (of course you don’t) to be an LGBT+ young person’s ally. But there are a few things that will help you on your way.

First, you need to understand what LGBT+ means.

Let’s start with some definitions. 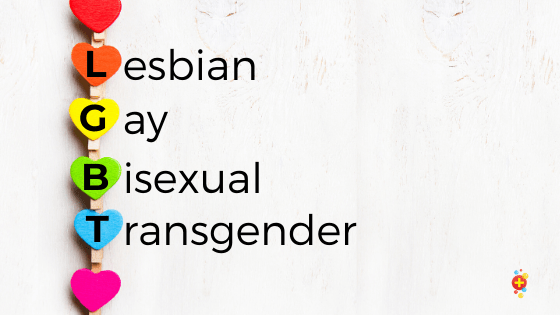 +: inclusive of all identities (queer, questioning, intersex, asexual, pansexual amongst others), regardless of how people define themselves.

There are some key definitions of sexual and gender orientation and expression. Let’s go through them:

Sexual orientation is a description of who we are attracted to romantically or sexually, such as lesbian, gay, bisexual, asexual, heterosexual.

Gender orientation describes an internal sense of being male, female, neither or both, a psychological sense of who we are and who we feel we are.

Transgender: a person’s gender identity is different from the gender they were assigned at birth.

Cisgender: a person’s gender identity matches the gender they were assigned at birth.

Gender expression is a description of how we portray ourselves to the world; how we act, speak, talk and dress. It ranges from feminine, through androgynous, to masculine.

These definitions are explained perfectly by the Genderbread person. 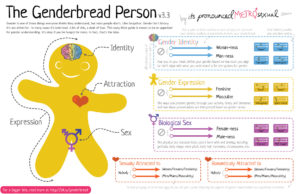 By Sam Killerman from itspronouncedmetrosexual.com

OK. So you know a bit of the lingo. What can you do to be an LGBT+ young person’s ally?

Katy is an 8-year-old girl who has been brought to the emergency department by her two mum’s, Jill and Freda. She’s called into triage and, after inviting them to sit down, the triage nurse asks, “Which one of you is Katy’s mum?” Jill replies by saying, “Actually, we’re a family with two mothers.”

Another assumption that’s often made is about a young person’s sexual identity based on their sexual behaviour.

Suzy is a 15-year-old girl who attends the emergency department with abdominal pain and dysuria. Her urine sample is dipped – no nitrites or leucocytes, but her beta-HCG is positive. She’s pregnant. With this information in hand, you go in and, after some gentle questioning (you’re pretty good at building rapport), you ask her how old her boyfriend is.  She looks at you with disdain and replies, “I don’t have a boyfriend.” Blustering a little, you ask whether she and her boyfriend have broken up. “I’ve never had a boyfriend,” she replies.

Suzy is attracted sexually and romantically to girls and has a girlfriend called Melissa.  And you’ve just lost her trust by assuming she was straight.  Adolescent lesbian and bisexual girls are also at risk of unintended pregnancies and acquiring sexually transmitted infections.

Yet another assumption people make is cis-normativity, the belief, or unconscious assumption, that that it is ‘normal’ to be cis-gendered.  It’s explained all too well by Emily, an 11-year-old transgender girl in the Mermaid’s #IfIHadAVoice video.

Once you feel you can actively make an effort not to make any assumptions, what else can you do to be an LGBT+ young person ally?

It can feel artificial to start with, but try and break the heteronormative barrier and ask a young person what their chosen gender or pronouns are.

Samuel is a transgender boy. His assigned gender at birth was female and the name on his birth certificate is Samantha. He has breast buds and looks feminine. You introduce yourself to Sam and his mother, Sandra, but as you’re explaining to Sandra that you’d like to speak to Sam alone, you say, “Would you mind stepping outside the room, while Sam and I speak together first? I’ll call you back in after I’ve examined her.” Sam looks stricken and Sandra gently explains that Sam is a transgender boy and uses the pronouns he/him.

If you accidentally misgender someone, apologize and correct yourself.  We often don’t know what name or pronouns someone would like us to use, and it’s safest to assume nothing and ask (and I mean ask everyone, because you will be caught out if you don’t), “How would you like us to record your details in the medical record?”

What about sexual orientation?  A sensitive way to ask a young person about their sexual identity is to ask if they have a partner or if they’re in a relationship. If they don’t have a partner, ask them if they’re attracted to boys, girls, either or neither.  Let’s think about Suzy again.

You’re about to see Suzy, a 15-year-old girl who attends the emergency department with abdominal pain and a positive urine beta-HCG. You call her into a cubicle and introduce yourself. After taking a history of her presenting complaint and past medical history, you start a HEEADSSS assessment (more on that later). Even though you know Suzy is pregnant, you know it doesn’t mean she’s heterosexual. As you start talking with Suzy about sexuality and gender identity, you ask her, “Are you attracted to boys, girls, neither or either?”

See what you’ve done here? Suzy can now tell you that she’s in a relationship with Melissa without breaking that rapport you’d already established, paving the way for further exploration about her sexual behaviour.

Let’s take a step back in time. Suzy may not feel comfortable telling you about her sexual orientation as she might be worried about whether you’ll keep this information confidential. Confidentiality is a huge one. We may feel torn between sharing information about a young person who’s at risk and maintaining confidentiality. Before you start taking a history, explain to a young person that anything you discuss will be kept confidential and private, between the young person and the team looking after them, but if you discuss anything really serious, like suicide or that someone was abusing them, then you’ll come up with a plan together to get the help needed. But, and this is an important but, even if there’s something that you need to seek help for, you’ll keep their sexual or gender identity confidential if this is what they want – this is private to them and you shouldn’t be outing the young person against their wishes.

We mentioned the HEEADSSS assessment.  HEEADSSS is a structured psychosocial history tool.  But when you use it, adapt it.

Up to 40% of young people experiencing homelessness internationally are LGBT+ with figures estimated to be as high as 45% in Canada and 24% in the UK, with similar patterns reported in Ireland. A report by the Albert Kennedy Trust found that more than two-thirds of LGBT homeless young people in the UK have experienced familial rejection, abuse and violence and shockingly almost 1 in 10 16 and 17 year olds have undergone or been offered conversion therapy.

Bullying is rife in schools. 1 in 2 LGBT+ young people in the UK and Ireland experience anti-LGBT bullying at school while 1 in 4 Irish LBGTI young people skip school to avoid anti-LGBTI bullying.

Enquire about activities. LGBT+ young people are less likely to participate in sports  than their heterosexual peers. Enquiring about their leisure time may reveal risk-taking behaviour (we’ll come to that under S for Safety).

LGBT+ young people are more likely to have had sexual intercourse, have had sexual intercourse before the age of 13 and less likely to use birth control than their heterosexual peers. Birth control, that’s a big one. Remember I said earlier that teen pregnancy occurs in lesbian teenagers just as it does in cis-gendered adolescent girls? The same is true for STIs. I don’t need to say that questions around sexuality and gender identity must be asked sensitively, in a non-judgmental way, without assumption, about sexual identity and gender identity.

It’s widely quoted, but mental health difficulties are much higher in LGBT+ young people, very likely related to a feeling of isolation and non-inclusion and as a result of verbal and physical abuse. More than 50% of Irish LGBTI young people aged 14-18 have self-harmed; 2 in 3 have seriously considered ending their life and tragically 1 in 3 have attempted suicide. The most common age for an Irish LGBT person to attempt to take their life is 15. These are shockingly high. But Irish LGBT+ young people mental health statistics mirror those across the world, in the UK, Australasia and North America.

I ask myself, “Why are all these problems seen in young people with an LGBT+ identity?” It’s likely due to minority stress – the stress associated with being treated as a minority group within our society.

Knowing the different LGBT+ terms isn’t important. What is important is listening with respect, not making assumptions and creating a safe space for discussion. An ally supports equal rights for LGBT+ people and let’s face it, we’re in healthcare because we want to help people. Healthcare is for everyone.

You may be the first person an LGBT+ young person meets in their acute healthcare. You may be the person they confide in. Their interaction with you may be one of the most important moments of their life.

Where can I find out more?

Thom O’Neill’s Be a supr doc for LGBT+ youth, SMACCDub

Bidell MP. Is there an emotional cost of completing high school? Ecological factors and psychological distress among LGBT homeless youth. Journal of Homosexuality. 2014:61(3);366-381

2 thoughts on “How to be an LGBTQIA+ young persons ally”