This post is based on a talk Dani presented at the Irish Association of Emergency Medicine conference in November 2019. The talk wouldn’t have been possible without the extraordinary help and inspiration from Mike Farqhuar from the Evelina London Children’s Hospital and Mike Healy from the Linn Dara CAMHS Unit.

This all starts with a story. The story of Sam, a 13-year-old with a passion for soccer. A 13-year-old who dreamt of playing professional football, who thought Arsenal was the best team in the world, who’d been to London 12 times to see them play.

It was the Friday before Christmas. We were just coming into a bank holiday weekend and it seemed the world was crowding into the children’s emergency department to get their children ‘fixed’ before Santa’s visit. Carols played through the speakers, the department was decorated with tinsel and a Christmas tree stood proudly in the corner of the waiting room. We had a stash of wrapped presents in the office to give the children for being brave and a reindeer head at the nurses’ station that played Jingle Bells when you pressed its red nose.

The bat phone rang. The ambulance service was bringing a 13-year-old in who’d been found at the side of a road, intoxicated. Their GCS was slowly rising from 12, their clothes were torn and there were clear signs of cutting up the teenager’s forearms.

Sam was wheeled into resus. We gave fluid iv. We warmed Sam with blankets. We contacted Sam’s mum and asked her to come in.

And as drunkenness gave way to sobriety, I gave Sam a cup of tea and sat down to talk. 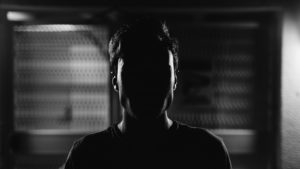 I explained that anything we spoke about would be kept confidential and private, between Sam and the team, but that if we discussed anything really serious, like suicide or that someone was abusing them then we would come up with a plan together to get the help needed.

I asked Sam what had happened in the hours prior to coming in. Sam told me that tonight’s drinking was to “numb the pain”. Sam seemed so sad and so isolated.

Sam’s mum was called Sandra. It was just Sam and Sandra at home. They generally got along well, although things had become strained in the last couple of years. Sam was withdrawing and although Sandra repeatedly told Sam how worried she was, Sam just didn’t know how to talk to her in the way they’d used to.

School was not a happy place either. Sam’s grades had slipped and bullying was rife. Sam was deeply unhappy and had started missing school, complaining of abdominal pain, headaches, tiredness. Sam’s GP had run blood tests and had organized an ultrasound but all the results were negative. I suspected that Sam was avoiding school because of the bullying.

Until recently Sam had played for a football team but had quit at the end of the last season. Sam was avoiding hanging out with friends and free time was generally spent watching TV or just curled up in bed, trying to sleep.

Sam denied drugs and said there were no friends who took drugs either. But Sam admitted to raiding the spirits bottles at home this evening to use alcohol to “feel numb”. Sam had been thinking of taking money from Sandra’s purse and asking some older youths who lived nearby to buy spirits but hadn’t been brave enough. Sam knew using alcohol like this was a problem but didn’t know how else to make the pain go away.

At this point, I paused slightly before asking, “Have you ever had sex?”

There was a pause. Slowly, Sam’s eyes met mine. “No,” replied Sam

“Have you ever been involved in a romantic relationship?” I asked gently. Again, “No”.

I was careful with my next phrasing, “If you were to have a relationship, do you think that would be with a boy or a girl?”

And then another pause. Sam’s eye flicked down to my lanyard where my NHS Rainbow Badge was pinned. “I feel like I should have been born a boy,” Sam whispered.

“Have you ever told anyone this before?” I asked gently.

“Would you like me to continue calling you Sam?” I asked.

“Yes,” replied Sam and then, slightly braver, “Well, no. My name is Samantha but I’d prefer to be Samuel.”

I asked Samuel when he’d started feeling low. It emerged that he’d always felt different from the other children, different to the girls, but around his 11th birthday he had admitted to himself that he was a boy. He’d told his mum but she’d laughed it off and told him he was just a tomboy, it was a phase, he’d grow out of it. He’d opened up to his best friend at school, but before long word was out and the bullying started. He internalized his feelings, started to withdraw from his friendship groups, started disengaging from school. And started self-harming. Cutting. And fantasizing about taking an overdose. But he was too scared.

I gently asked him whether he’d put himself in unsafe situations; not wearing a seatbelt, trouble with the police. “No, nothing like that,” he quietly replied.

“Will you tell her for me please?” he added hopefully. “Of course,” I replied again.

Sam’s mum was devastated. Not by his gender identity but that he’d been so sad, so unable to communicate with her.

Samuel was seen by CAMHS later that afternoon. A safety plan was made, along with a referral to paediatric endocrinologist specializing in gender identity.

I’ve reflected on Samuel’s case a lot. Asking about sex seemed like a pivotal moment. But it wasn’t just the way I asked that made him open up to me. It was the badge I was wearing. 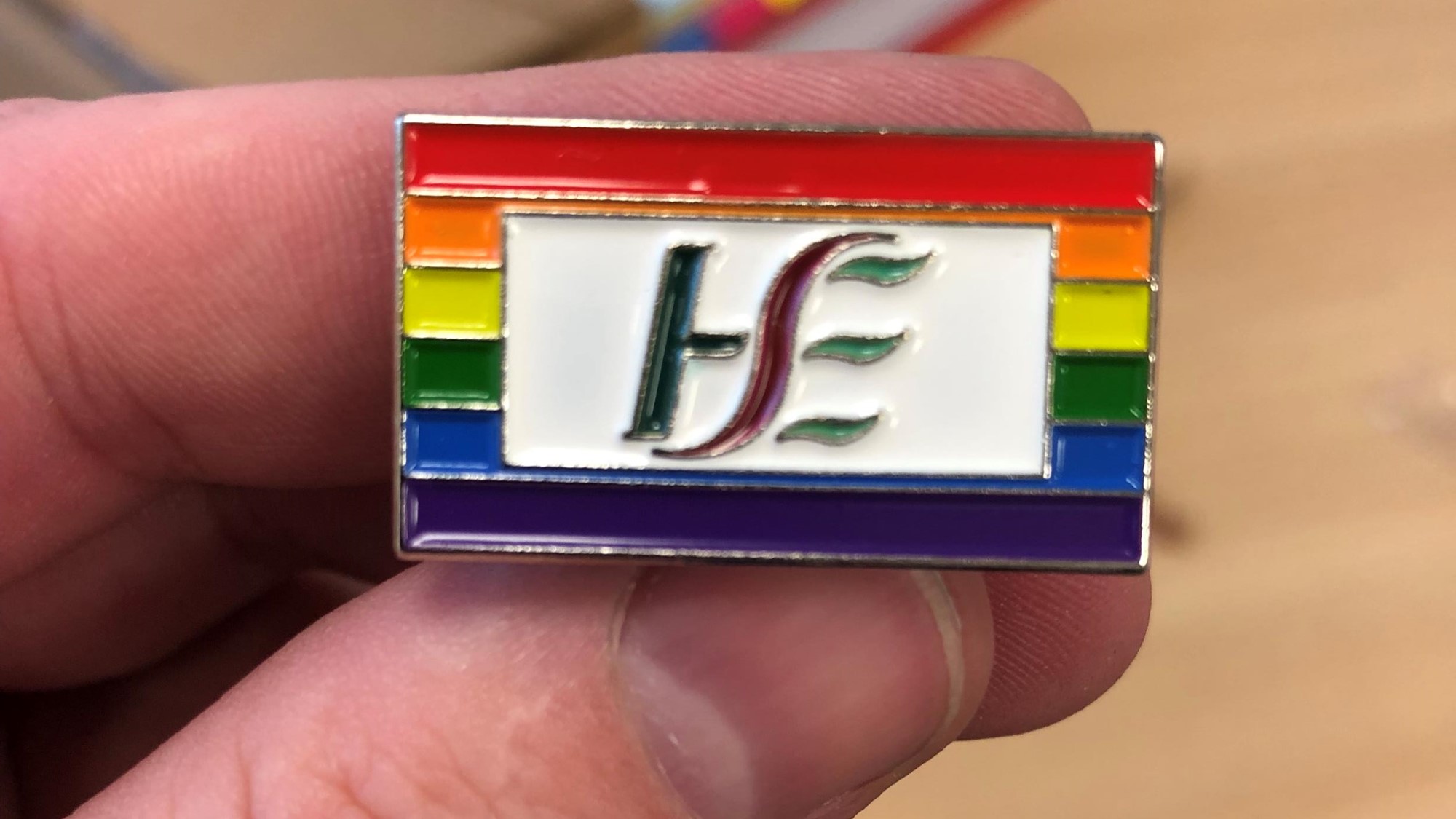 Since moving to Ireland I’ve been telling everyone in healthcare about the HSE Rainbow Badge, first introduced in the Linn Dara CAMHS unit in Dublin this summer. I’m so delighted to tell you I’ve secured funding to launch the badge in the three emergency departments and urgent care centre in Children’s Health Ireland, the badge is being endorsed by the Irish Association of Emergency Medicine and badges are making their way into other hospitals around Ireland.

Let me tell you why this is so important. 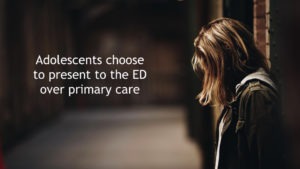 We know that adolescents prefer to use the emergency department over primary care. There are multiple reasons for this, but one widely quoted one is perceived confidentiality. Confidentiality around bullying, around mental health, sexual health, and sexual identity.

And that is a big one. A recent Irish study by Higgins et al, funded by the HSE’s National Office for Suicide Prevention, showed that the most common age for Irish children to know their sexual identity is 12. These are the kids I see in the ED. 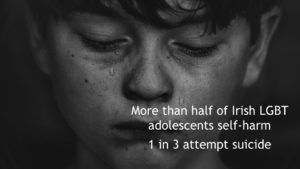 The average age of first attempted suicide was 17 but children as young as 8 were presenting after attempting to take their own lives because of their gender identity. 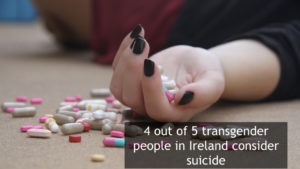 Transgender people remain among the most vulnerable members of society and experience high levels of stigmatization and marginalization.

In Ireland, 4 out of 5 of transgender people, like Samuel, have considered suicide.  Bullying is higher in transgender children and young people and this, along with other ways society treats transgender young people, can lead to mental health problems. Mermaids UK has put together a phenomenally poignant video, #IfIHadAVoice, about the way young transgender people are treated. At just a minute long, it’s incredibly powerful. 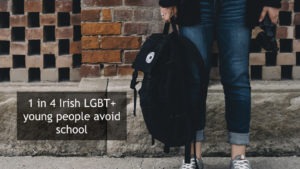 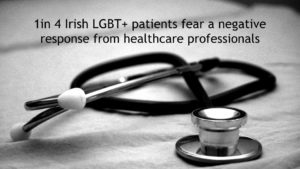 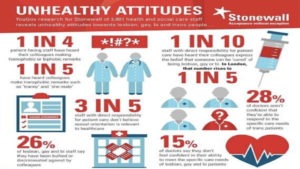 Last November, the Unhealthy Attitudes report by Stonewall UK showed that there sadly still inequalities in UK based NHS healthcare for LGBTI patients, with terribly sad statistics of: 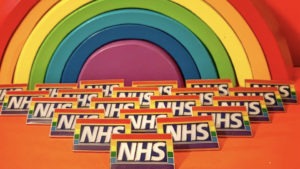 And so the NHS rainbow badge was born. Introduced by Dr Mike Farquhar at the Evelina London, it has gone viral across the UK. In just 9 months 60% of ALL Trusts in England have signed up to the badge, that’s quarter of a million badges, while Wales and Scotland are designing their badges with their National NHS leads. Follow @RainbowNHSBadge on Twitter to access the wealth of information and inspiration.

And then Mike Healy and the team at the Linn Dara CAMHS unit branded the rainbow badge with the HSE logo and brought it to Ireland. By choosing to wear the badge healthcare staff send a message to patients and their families that they’ll listen to them with respect, that they’ll support them and create a safe space for discussion, that they’ll be their ally.

It comes as part of a package with education and training around the needs of LGBT+ people in Irish healthcare, resources to signpost patients towards and a pledge to sign.

It’s a responsibility and it’s opt-in. Staff who want to wear it need to feel comfortable wearing the badge and feel as if they would know what to do if a patient disclosed to them.

Alone, the badge isn’t the solution, but it starts conversations. Creates awareness. It helps open our eyes to ways to help and support LGBT+ people around us.

It’s not just for the extreme presentations, the children and young people presenting with self-harm like Samuel. The badge offers so much to any LGBT+ patient, carer or family member in a healthcare environment. 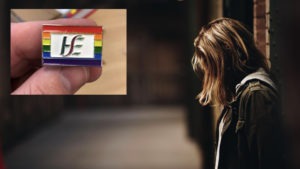 As a consultant in the ED I see a lot of adolescents presenting with self-harm. I know I’m in a very privileged position to advocate for inclusion for vulnerable LGBT+ children and young people, either presenting in crisis or for those who feel they just need someone to show them a sign that they can talk to them.

We know that 50% of LGBT+ youth, like Samuel, don’t have an adult they feel they can confide in.

I may be the first person an LGBT+ young person will meet in their acute healthcare. I may be the person they confide in.

I heard a saying at a conference recently: “The man who builds mountains starts by carrying small stones.” There are 100,000 HSE workers. We can move a lot of small stones. 100,000 small changes will lead to a tidal wave of change. 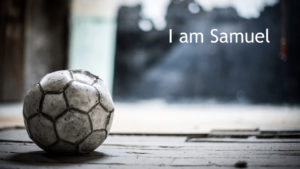 I saw Samuel and his mother in the emergency department several months later. He gave me a rueful smile as he told me he was back on the pitch, playing midfield and showed me his bruised and swollen ankle.

His mother took me aside. It hadn’t been easy and she was still having to remind herself to call her child Samuel rather than Samantha, to use male pronouns instead of female, but Samuel seemed happier, more present in himself. His mother was so grateful that Samuel had felt he could tell me about his unhappiness but still felt wracked with guilt that he hadn’t been able to tell her, that it had taken a trip to the emergency department and an encounter with someone wearing a badge to make him feel he could talk.

As they left, walking boot in place to support Samuel’s ankle, I saw Samuel’s mum touch him gently on the shoulder. He looked over his shoulder and caught my eye and smiled.

O’Neill and Wakefield. Fifteen-minute consultation in the normal child: Challenges relating to sexuality and gender identity in children and young people. Archives of Disease of Childhood Education and Practice Edition. 2017;102:298–303

Butler et al. Assessment and support of children and adolescents with gender dysphoria. Archives of Disease of Childhood. 2018; 103(7): 631-636

Being LGBT in School. 2016. GLEN and Department of Education and Skills, Ireland

McCann and Sharek. Challenges to and opportunities for improving mental health services for lesbian, gay, bisexual, and transgender people in Ireland: A narrative account. International Journal of Mental Health Nursing. 2014; 23(6):525-533