Home > View All > Asthma for Ambos

Tonight I had the privilege to talk to the team at the Werribee branch of Ambulance Victoria. I was given the brief to talk on something to do with paediatric respiratory problems and I thought I would focus on one of their most common presentations – asthma.

Asthma is such a common condition, affecting one in ten Australians.  In Victoria alone approximately 17.2% of all children have been told by a doctor that they have asthma. The incidence in Aboriginal or Torres Strait Islanders is higher at around 20%. Whilst a large number of these will never need to go to hospital, there were 18, 824 children in NSW taken to hospital. Of these, 43% percent need admission – much higher than their adult counterparts. A large number can be safely managed at home with their pre-written asthma action plan (though only 41% of kids under 15 years of age have one) but some children are more at risk of critical or life threatening asthma than others. In 2009 (the latest dataset from AIHW) there were 411 asthma related deaths. Fortunately the death rate in the under 15 year old sub-population is around 0.2 per 100,00 people. It is hard to tease out the actual data as National Mortality Database lumps all deaths between 5-34 years.

Risk factors for a more severe attack in children include:-

There is a peak in ED visits for asthma in late summer and autumn in children whereas more adults present in the winter, possibly due to the increased incidence of viral upper respiratory tract infections among adults at this time of year. Another hypothesis for the increased incidence in the summer months is because of decreased compliance with preventative medication.

Some people are more likely to call an ambulance than others. They include those with :-

Because asthma is such a common condition the ambulance service is very experience in managing it but I wanted to focus on some areas where what should happen and what does happen might diverge.

Oxygen saturations are useful in the management of asthma 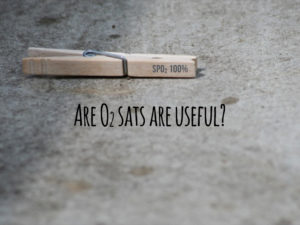 The pathophysiological basis of an acute exacerbation is bronchospasm, coupled with increased mucosal oedema and hypersecretion of mucus.  This leads to hypoxic vasoconstriction and decreased blood flow to the under-ventilated lung in order to match pulmonary perfusion with alveolar ventilation.

Hypoxaemia and hypocarbia only occur in the presence of life threatening asthma. Taking into account the haemoglobin-oxygen dissociation roller-coaster it is easy to see how many children may teeter on the precipice before critical desaturation occurs. Whilst low oxygen saturations mean that a patient is unwell it should be clinically obvious at this point.  On the flip-side normal oxygen sats do not mean the patient is fine.  Concerns have been raised that oxygen administration may lead to potential delay in recognising clinical deterioration. Low oxygen saturations may also represent a degree of mucus plugging that may be helped with repositioning.

Nebulizers are better than spacers 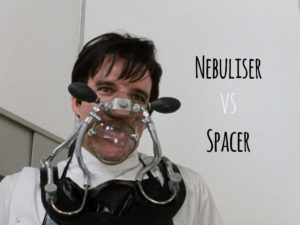 A recent Cochrane review comparing the use of nebulizers with spacers found that there was no difference in hospital admission rate with either mode of delivery. There also appeared to be no difference in lung function or oxygen saturation when either device was used. What was different, however, were the adverse effects profile. The common salbutamol side effects of tremor and tachycardia were both more prevalent in those that used a nebulizer device.

So do you know how to use a spacer? I took the Werribee team through the procedure.  If you are not sure then take a look at this great instructional video from Asthma Australia:-

Whilst spacers are cheap, those of you with the MacGyver instinct may want to make your own.

These jerry rigged spacers have certainly been shown to be as effective as conventional devices in resource poor settings.

You can never give enough salbutamol 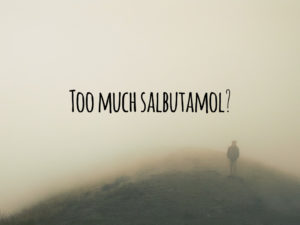 Inhaled B2 agonists are given to relieve bronchospasm and improve oxygenation.  Minor side effects that we have all seen include tremor, anxiety, headache, dry mouth and palpitations. If given, without oxygen, they have been shown to cause or worsen hypoxaemia. The mechanism behind this is pulmonary vasodilation leading to a worsening ventilation-perfusion mismatch.

Metabolic acidosis has been seen as a direct result of inhaled salbutamol as a result of lactic acidosis. Even when the mechanical work of breathing has been improved with paralysis and ventilation this still holds true. In the non-paralysed patient the body compensates for this metabolic acidosis by increasing the respiratory rate.  This may be mistaken as a worsening in respiratory function and so escalating doses of beta agonist provided.

So how does one recognise potential salbutamol toxicity in the pre-hospital setting? It should be considered in all children who are wheezy, restless, tachycardic with increasing doses of beta agonist.

Even normal doses of inhaled salbutamol have been shown to cause hypokalaemia but the clinical significance of this is unknown. Theoretically hypokalemia, together with worsening respiratory and metabolic acidosis may have catastrophic cardiac effects.

Adrenaline is dangerous in asthma 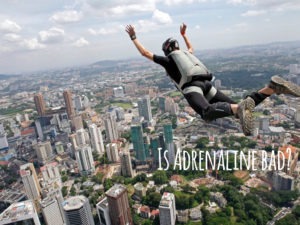 One of the most most obvious reasons for using adrenaline in the setting of apparent severe or life threatening asthma is that the diagnosis may be in doubt.  Asthma and atopy often co-exist. Patients with known food allergies and asthma are much more likely to die due to anaphylaxis than those without asthma.  A child with severe anaphylaxis may initially have no more signs than a wheeze and worsening air hunger that is mistakenly treated as asthma. The diagnosis of anaphylaxis should be considered in all who fail to respond to initial therapy.

Nebulized adrenaline may be helpful in acute asthma via direct beta adrenoceptor mediated bronchodilatation. It is possible that there are also some alpha effects via reduction in localized oedema and reduction in microvascular leakage. Small studies have shown no difference between nebulized adrenaline and nebulized salbutamol in terms of increased peak expiratory flow. The may also be less of a drop off in PaO2 due to the V/Q mismatch seen with salbutamol use due to alpha action.  In younger children, bronchospasm may be less of an issue than mucosal oedema.
Remember all inhaled therapies are ineffective if they don’t go anywhere. If the child is so tight that they can barely inhale then salbutamol or nebulized adrenaline are likely to be of benefit and so alternative route should be sought.  IM adrenaline can be given quickly to the critically ill asthmatic whilst IV access is obtained.  At the time of writing a clinical trial into the potential benefit of IM adrenaline as an adjunct to inhaled B2 agonists is recruiting in the US.

If the child is wheezing they have asthma 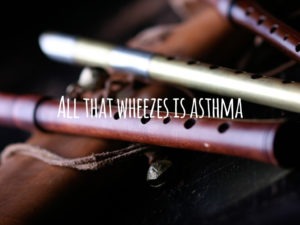 Around 17% of infants experience wheeze with the first three years of life. Not all of these end up with a diagnosis of asthma. By the age of 4-5 the incidence of wheeze is around 21.7% which is almost double the incidence of asthma (11.5%) in this population. By the school years the incidence of wheeze and asthma are near identical.
Wheeze is characterized by “a continuous whistling sound during breathing that suggests narrowing or obstruction in some part of the respiratory airways.” With that definition in mind there are a number of clinical entities that may cause  a wheeze. There is a grey area between those children with obvious asthma and obvious bronchiolitis. Whilst bronchodilators would be appropriate in asthma a large Cochrane review found them to be ineffective in bronchiolitis.  Most clinicians would give a one off trial of salbutamol as long as it did not interfere with other management.  There is also no evidence of benefit for the use of systemic corticosteroids in pre-school wheeze.  Other potential diagnoses to consider include inhaled foreign bodies, pneumonia or pneumonitis, tracheomalacia or complications of congenital conditions.

So the presence of wheeze does not guarantee that the child has asthma. It is also worthwhile mentioning that the absence of a wheeze does not rule it out either. If there is severe bronchospasm and mucosal oedema not enough air entry will occur to cause a wheeze.

Oxygen saturations are useful in the management of asthma

Nebulizers are better than spacers

Castro-Rodriguez JA, Rodrigo GJ. β-Agonists through metered-dose inhaler with valved holding chamber versus nebulizer for acute exacerbation of wheezing or asthma in children under 5 years of age: a systematic review with meta-analysis. The Journal of pediatrics. 2004 Aug 31;145(2):172-7.

You can never give enough salbutamol

Adrenaline is dangerous in asthma

If the child is wheezing they have asthma

1 thought on “Asthma for Ambos”