Wheeze must be one of the most common paediatric presentations to the emergency department and up till now most of us have been reassuring parents and sending them away without treatment. But should we be doing more?  A paper, released just last week, suggests that we could.

There has always been some uncertainty about the benefit of prednisolone for viral wheeze in pre-school children. In 2009, a study by Panickar et al found that there was no positive effect in giving steroids to pre-school children with wheeze. Since then, our practice, and our treatment guidelines, have changed, in spite of questions about the applicability of this study.

This study aimed to assess the efficacy of oral prednisolone in children presenting to a paediatric emergency department with suspected viral wheeze.

Eligible patients were 2 to 6 years of age.

Patients were excluded with: sats <92% in air;  a silent chest; shock or sepsis; previous PICU admission with wheeze; prematurity; other cardiac or respiratory disease; likely alternative diagnosis for the wheeze; or steroid treatment within the preceding 14 days. 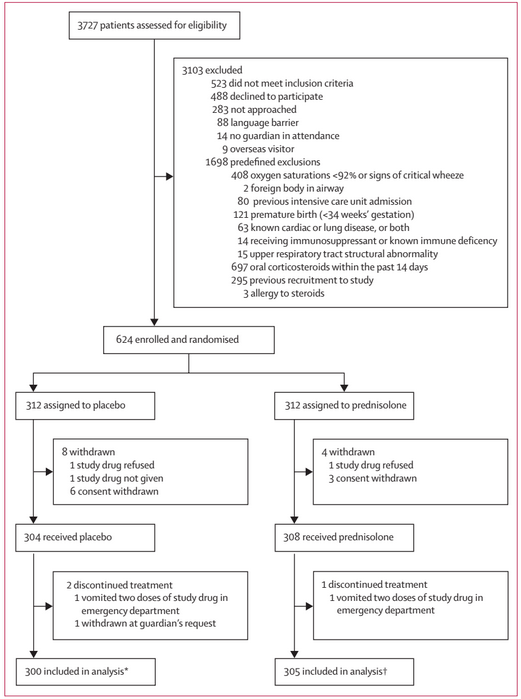 The study design was suitable for the objective and looked at the population we see regularly with viral wheeze. By excluding the 10 month to 2 year age group, the authors have removed the bronchiolitis age group.  These should be managed differently and respond to different treatments.

A sample size estimation was calculated. Appropriate outcomes measures were considered, although the current article only aims to explore outcomes up to seven days. We will need to wait for future publications to find out the rest of the results.

The intervention was a three day course of oral prednisolone (1mg/kg once daily).

The pulmonary score was the initial measurement. It should be noted that this pulmonary score is not validated in children under five years of age. The score was calculated to help rate the severity of the patient’s symptoms in order to determine whether that severity made a difference to outcome.

This was a randomised double-blind trial. Patients were randomly allocated to either group. The placebo group received an identical medication bottle with contents that looked, smelled, and tasted like prednisolone.

Randomisation was carried out appropriately and this was a double-blind study. Placebo and prednisolone samples were made to be indistinguishable to the clinicians and the parents.

However, patients were given prednisolone if a clinician felt this was necessary. So, if a patient was admitted to the ward and a doctor felt that they should receive steroids, then they were given them.  23 patients in the placebo group were given steroids later by a clinician. It is not clear what happened to these patients in the analysis, but it seems as though they were included in the placebo group for analysis. If anything, this would have made it more difficult to find a significant difference between the group.

The primary outcome was length of stay in the hospital. Secondary outcomes (in the first 7 days) included: reattendance; readmission; salbutamol usage; and residual symptoms after discharge.

Interestingly none of the results were significant in the group of patients who were discharged within four hours.

Family history or personal history of atopy, although previously identified as a major risk factor for ongoing wheeze did not affect the outcomes in this study. At pre-school age, they do not modify steroid responsiveness in viral-induced wheeze

The two study groups were stated to be comparable with no significant differences in the demographics, pulmonary score, or history of atopy or previous salbutamol use. This is demonstrated in Table 1, however the statistical analysis is not explained here (i.e. how did the authors confirm that there was no difference between the group). It may be that a t test or chi squared test was conducted here to compare the two groups, but this is not mentioned in the article. The authors seem to assert there were no differences in the various parameters without reporting the statistical evidence from the tests.

The numbers all add up consistently, and side effects were reported. Two children (one from each group) were reported to be hyperactive – an interesting result given anecdotal advice often given to parents (and received from parents) about the effects of prednisolone.

The data are suitable for analysis and the methods used are appropriate, however their statistical analysis is not that easy to follow. Chi squared and t tests are referred to as well as linear regression. It is not clear what questions these different analyses were used to answer. The chi squared and t tests were likely used to explore whether the groups were different from each other, but they do not seem to be reported in this article. The linear regression is the main analysis used to see if outcomes differ for the two groups.

The statistical analysis of the re-attenders (secondary outcomes) was not fully explained in the article, and although the initial plan for secondary outcomes was stated to be in the first seven days post-discharge, these were actually reported over three months.

The results are discussed in relation to prior evidence (specifically Panickar et al), and the study was designed and analysed with comparable studies and future meta-analysis in mind.

Will I change my practice? – Damian Roland

In my first year as a doctor my hospital’s management of children with wheeze was to give nebulisers, steroids and if it was their first presentation, to order an x-ray. Since that time evidence has suggested steroids may not be useful in children not formally diagnosed with asthma, and that an x-ray isn’t a helpful initial test.

As my experience has grown I increasingly recognise a number of phenotypes of the “wheezy child” which don’t fit nicely into current evidence. There is certainly a group of children below the age of five who appear steroid responsive. Anecdote suggests they are likely to have atopic backgrounds (or come from families with a strong atopic history) and are at the more acutely unwell end of the acuity spectrum. There is face validity to this observation as it makes sense these children would have the greater steroid responsiveness. So what should we make of the fact atopy wasn’t a risk factor. Which inflammatory pathway is the steroid then acting on?

This study isn’t going to change what I currently do as I think it supports my intuition that as yet we still don’t have a good diagnostic system for infant and childhood wheeze. A theory which would support both the Panickar and Foster work is that there are different cohorts of children between the age of 1-5 who present with similar symptomatology but for different pathophysiological reasons. The spectrum of bronchiolitis to viral wheeze to asthma is not precise enough to guide the most effective management. As recent discussion around dexamethasone and prednisolone has shown, if we can’t define the group we are treating how can we adequately assess the response to treatment?

What I will be doing is thinking carefully about the diagnosis in patients I see, or are reviewed by me, and asking “Why shouldn’t this patient have steroids?”

We look forward to hearing from one of the authors, Meredith Borland, on the future directions of research based on this study at www.dftb18.com.

1 thought on “Steroids for pre-school wheeze”