The lens with which you view sepsis is dependent on the environment and emotion in which you associate the term. For a parent, this may be the spectrum from having never heard the term before “Your child is well enough to go home, we’ve ruled out sepsis and other serious conditions” to the anguish of being told, “I’m afraid your child died of sepsis“. This spectrum remains equally wide for health care professionals. A family doctor or general practitioner may never see a case of confirmed sepsis, and an emergency clinician can potentially go years between seeing a truly shocked child. An intensivist, however, may deal with the consequences on a weekly basis. Even in the last month, we have seen two papers from the same publishing group; one highlighting the global burden of sepsis and the other challenging the current hype surrounding its recognition and management.

Regardless of your viewpoint, the publication of the Surviving Sepsis campaign’s international guidance will have been of interest.

It is important to recognize two features of this publication which should carry an important health warning in its interpretation.

The first is that the authors are clear that they are focusing on severe sepsis or septic shock. While in adult practice definitions have changed, these have not been formalized or ratified for children:

The authors clearly recognize that the absence of a clear definition of paediatric sepsis is challenging health care providers and organizations. The group has steered away from suggesting management options in the ‘pre-sepsis’ group i.e. those children with potential infections that may result in sepsis and have physiological instability but without organ dysfunction. They suggest that management practices for this group aren’t radically different, however:

The second is that this is a consensus document. It is neither a systematic review nor a clinical practice guideline (in a local hospital sense). It comprises the opinions of an expert group of clinicians (49 in fact) from a variety of international settings using the best available evidence. The publication is essentially a list of recommendations. This approach is valid in situations where evidence may be heterogeneous and that randomized controlled trials can not be performed for all possible permutations of clinical practice. As with all things in science, however robust the data is, it still needs interpreting and that interpretation is subject to all manner of explicit and implicit bias.

The panel supports that these guidelines should constitute a general scheme of “best practice,” but that translation to treatment algorithms or bundles and standards of care will need to account for variation in the availability of local healthcare resources.

So the big-ticket items

1. A child was defined as beyond 37 weeks gestation and up to 18 years old.

2. They apply to children with severe sepsis or septic shock as defined by the 2005 International Pediatric Sepsis Consensus Conference or inclusive of severe infection leading to life-threatening organ dysfunction.

Septic shock was defined as the subset with cardiovascular dysfunction, which included hypotension, treatment with a vasoactive medication, or impaired perfusion.

3. Panel members were selected through recommendations from chairs and vice-chairs of the 12 worldwide member organizations. Each panel member was required to be a practicing healthcare professional with a focus on the acute and/or emergent care of critically ill children with septic shock or other sepsis-associated acute organ dysfunction. There was lay representation and the final membership was felt to be demographically diverse with regard to sex, race, and geography.

4. The panel was assisted by various methodological experts and split into six groups

5. A list of critical questions was developed in the PICO format (Population, Intervention, Control, and Outcome) which was then rigorously searched for by a specialist medical librarian and the resulting literature assessed according to GRADE criteria a well-recognized methodology for systemically presenting summaries of evidence.

6. Following discussion and debate recommendations would be made:

The paper goes into considerable detail (which is why it is 55 pages long) into the rationale behind the recommendations. They are all summarised in the appendix (commencing page e102). It is beyond the scope of this blog to explore all the recommendations in detail, and it is important that health care providers read the paper itself. The following highlights some of the areas which may prompt debate or query.

For those in emergency and acute care, this recommendation may have come as a surprise given a large amount of anecdotal feedback and experience suggesting that current screening mechanisms for the un-differentiated child are neither specific nor sensitive. It is worth nothing again the panel was looking at severe sepsis or shock and the evidence for ‘bundles’ of care i.e. targeted or mandated treatments once recognized is relatively robust. There is a further section on protocols/guidelines for treatment but it may have been useful to separate the afferent limb (recognition) from the efferent limb (response) in relation to collated evidence. This is important as the evidence for ‘bundles’ is cited under screening, with minimal evidence of screening approaches alone put forward (or to be fair to the panel perhaps of insufficient quality to make a judgment on).

Although subtle I think the panel recognized how important local buy-in is in relation to quality improvement. Of note, there is nothing on national guidance for recognizing sepsis. They also highlight how blindly integrating screening with any other scoring system may not be as beneficial as believed.

Ultimately no one particular screening system is recommended.

There is no target lactate

There appears to be a palpable sense of regret that the evidence didn’t support any particular threshold for lactate. Despite evidence of rising mortality with increasing lactate, the panel was not able to determine a specific level.

However, no RCTs have tested whether initial or serial measurement of blood lactate directly informs evaluation and/or management in children. Lactate levels should, therefore, be interpreted as a part of a more comprehensive assessment of clinical status and perfusion.

Take blood cultures but don’t delay treatment to obtain them

Appreciating this isn’t a particularly scientific response, but well, duh.

One hour time to treatment for those in shock but up to three hours without it.

This is the potential game-changer from this body of work. While the evidence shows a temporal relationship between the administration of antibiotics and outcome in severe sepsis some pooled data demonstrated that it was unlikely the hour alone made the difference. Given the numerous papers showing a linear relationship between time to administration and outcome the ‘golden hour” was maintained. In the absence of shock, the panel felt, based on data showing a three-hour threshold effect, this would be a reasonable time point. This will be a welcome relief for those working in areas where there are associated penalties for not reaching the hour window and hopefully will remove some of the gaming associated with this target.

Little controversy here. The panel highlight that 48 hours should be the maximum time that is allowed to pass before re-evaluation in the absence of culture growth rather than a standard time to elapse.

If no pathogen is identified, we recommend narrowing or stopping empiric antimicrobial therapy according to clinical presentation, site of infection, host risk factors, and adequacy of clinical improvement in discussion with infectious disease and/or microbiological expert advice.

There are a number of recommendations on immunocompromised children and source control which appear pragmatic.

Bolus if intensive care available, if not then don’t unless documented hypotension

**Post-publication note (13/02/20): A more correct description of no intensive care would be “in health systems with no access to intensive care”. The guidance states, “For children with septic shock without signs of fluid overload in low-resource settings where advanced supportive and intensive care is not available, the panel recommends against bolus fluid administration,”. This question is raised in the comments section below as for units in without intensive care on site but it will resourced health systems then ‘access’ to intensive care should be assumed**

For purposes of this weak recommendation, hypotension can be defined as: 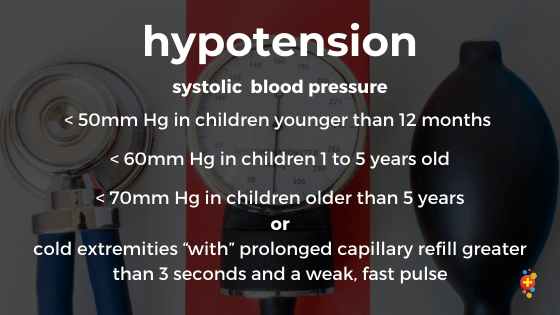 Use advanced haemodynamic variables, not bedside clinical signs in isolation

There is a list of suggestions regarding vasoactive infusion and ventilatory strategies that are very specific to intensive care management. While a number of recommendations are given (epinephrine rather than dopamine for septic shock for example) these are generally based on the panels summation of weak evidence.

There are further suggestions on corticosteroid management, nutrition, and blood products which will be of interest to those in intensive care and anaesthetic settings.

This is a very rich piece of work that is well structured and easy to read (even if you are not an expert on a particular field of practice). For most paediatricians there is unlikely to be an immediate change in practice but the softening of antibiotic time to delivery in the non-shocked child and emphasis of local review of sepsis incidence and performance will be welcome. How these filter into national guidance will be determined country by country but it is unlikely that radically different views can be drawn from the available evidence. What is still sorely needed is a working definition for the non-hypotensive child with sepsis (or an acknowledgment that perhaps this isn’t really a clinical entity…)