A fifteen year old named Jason limps into A&E at midnight with a black eye, a split lip, and pain in his jaw, worst around the left angle of the mandible. He is guarded about what has happened to him. He is reluctant to give his full name or for his parents to be called. You smell cigarettes on his clothing and you wonder if he might be intoxicated. He says it is numb when he touches his chin but it was really painful when he tried to eat some crisps in the waiting room.

Children with facial injuries rarely fracture a bone; this has been attributed to the larger size of the cranium relative to the face (providing some protection for the facial bones) as well as the decreased likelihood that children will engage with activities which fracture facial bones (fighting/assault, motorcycle or high-speed bicycle accidents, significant falls). It is also thought that the stability from unerupted teeth, increased bone elasticity, and the more generous facial adiposity are protective. All of these factors are more true of younger children and decrease with age, so unsurprisingly facial fractures become more likely in older children and young people.

Fractures are sustained in approximately 1 to 15% of paediatric facial injuries. When a fracture is sustained the commonest broken bone is the mandible.

In a large American cohort of almost 9000 children and young people under the age of 18 with mandibular fractures, the mean age of presentation was 14 years, with three-quarters occurring in teenagers aged 13 – 18 years. As with many injuries, mandibular fractures were significantly more common in males. Mandibular fractures are rare, however. This cohort represented only 0.03% of all ED visits in the under 18s.

Approximately one-third of mandible fractures in the under 12s in America are caused by falls (skewed slightly by girls who are more likely to sustain injuries when younger) and 16% by road traffic accidents. In those aged 13 – 18 years, the commonest cause was assault (39.9%) and these patients were more likely to be male. Other common causes were bicycle accidents and sports. In a smaller cohort of 64 cases, more than half were caused by road traffic accidents followed by falls in one-fifth of cases which is perhaps reflective of their younger skew of patients (from 1.7 months to 14 years). 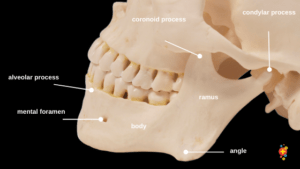 The mechanism is somewhat predictive of the injury. Younger children are more likely to sustain a condylar fracture, sustained when a direct blow from underneath the chin radiates up to the condyles, such as when falling on to the chin. Direct impact in the centre of the chin, as seen in epilepsy or syncope when there is a fall with no attempt to catch oneself, may result in a “guardsman fracture” of both mandibular condyles and the central symphysis.

In contrast, adolescents have a much wider range of injuries with the commonest at the angle (17.6%) followed by the condyle and ramus. This may reflect the various angles of impact from assault and vehicular accidents. Approximately half of mandibular angle fractures in adolescents are caused by assault, in keeping with the likely landing place of a “hook to the jaw.”

Symptoms and signs of a mandibular fracture include pain, malocclusion, dental injury, and facial lacerations particularly around the ear and in the ear canal.

Paraesthesia can occur most typically from disruption to the mental nerve (a branch of the mandibular branch of cranial nerve V – the trigeminal nerve), which emerges through the mental foramen towards the anterior end of the chin. Thus we might expect paraesthesia if the impact and/or fracture is fairly central towards the mental protuberance. Areas supplied by the mental nerve which may lose sensation are the lower gum, lower lip and skin over the chin. 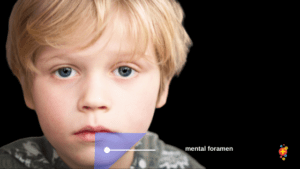 Distribution of the LEFT mental nerve

Dislocation of the mandible at the temporomandibular joint is rare in young children. However when it occurs it can be easily identified by the complete inability to close the mouth – associated with drooling, inability to eat and difficulty speaking. Traumatic dislocation may occur in instances where the trauma has had a downward impact on a partially open mouth. Combined fracture/dislocations usually indicate more serious trauma.

In very rare occasions TMJ dislocation may occur spontaneously without trauma. Two such cases have been described in France. Given the rarity, the authors suggest that dislocated mandible in children should prompt consideration of connective tissue disease, dystonic movement disorders or epilepsy.

In a simple dislocation without fracture the mandible can be relocated by applying bimanual intra-oral pressure inferiorly then dorsally. This ‘traditional’ technique is so successful it has been conducted the same way for over 3,000 years and it is one of the techniques described on the ancient Egyptian “Edwin Smith” papyrus. The Egyptians didn’t hold a monopoly on TMJ reduction though: with a 10ml syringe or a moderated jaw-thrust, the mandible can often be relocated without the need of sedation in older adolescents. 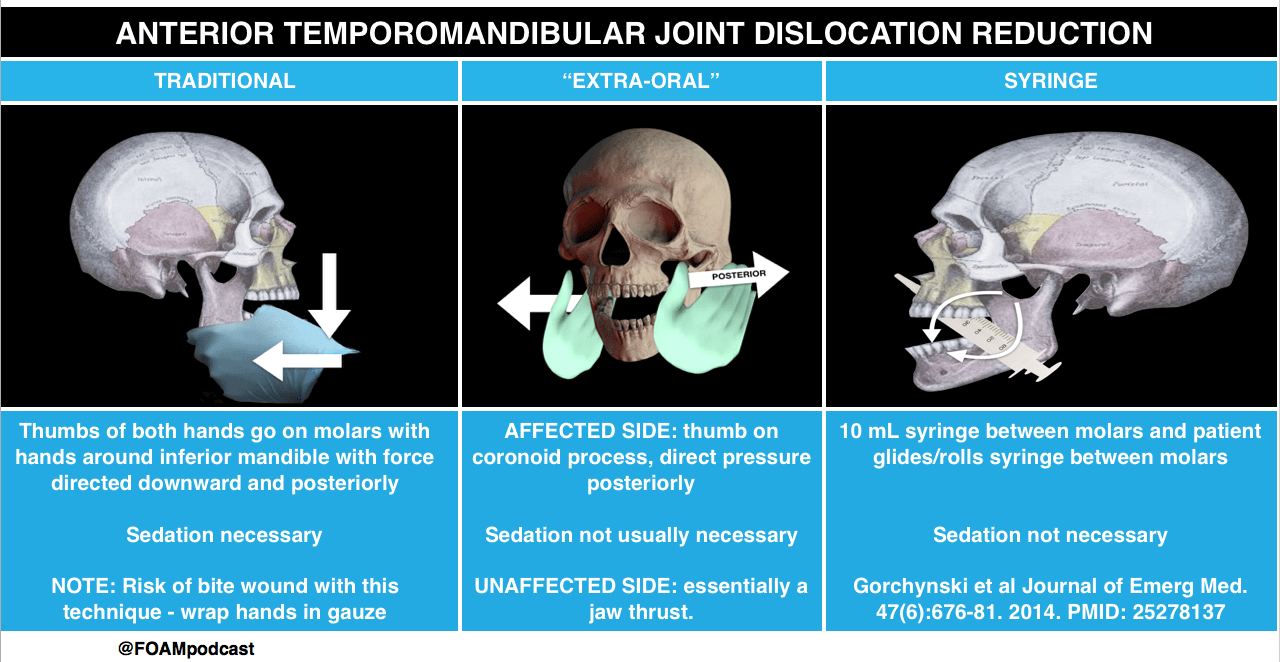 Of course, patients presenting following high impact trauma require a primary survey and resuscitation as needed as the first priority. Assuming that our patient is stable and we only need to assess the mandible for injuries, then we can proceed in the standard musculoskeletal pattern of Look, Feel, Move, Neurovascular Status.

Check inside the mouth

Look inside the ears

Other points to consider

Was there trauma to the neck?

Make sure you have excluded airway compromise, in the form of direct trauma, haematoma or foreign bodies, and c-spine injuries, which co-exist in approximately 4% of children with mandible fractures. A significantly damaged mandible may affect the efficacy of jaw-thrusts during resuscitation.

Was there a head injury?

Intracranial injuries have been described in up to 8.5% of children with mandibular fractures. A 2008 study by Imahara et al found base of skull fractures in over a quarter of children with mandible injuries. Include screening for any concerning features of head injury in your assessment and investigate if red flags are present.

Are there any lost teeth that are unaccounted for?

Consider a chest x-ray if there are hints that lost teeth could have been aspirated during the incident.

What about the secondary and tertiary surveys?

Wolfswinkle et al (2013) found that 75% patients with mandible fractures have some other kind of injury, including 8% having a second facial fracture.

Jason is very bruised over the left side of his cheek with an abrasion and a 5mm superficial laceration on his lip which doesn’t cross the vermilion border. There are no skin breaks inside his mouth and he doesn’t have any loose teeth. He can open and shut his mouth but it does hurt when he presses his jaws together. He could hold a tongue depressor between his teeth on the right side, whereas on the left he had a fairly strong grip but you managed to pull the tongue depressor out. He can’t feel touch over his chin and lower lip.

He has bruising around his left eye but no bony tenderness or steps in the bone and eye movements are normal. He has a full range of neck movements with no neck pain. His neurological exam is normal including cranial nerves aside from the paraesthesia on his chin. There are no red flags for head injury in his history.

If the clinical suspicion of a fracture is high, imaging will be required. If using plain x-ray then there is the choice of a “mandible series” consisting of around six films, or a panoramic view (orthopantomogram or Panorex). Both options for plain films require patient cooperation so it might not be suitable for conscious young children. CT, of course, gives richer detail but requires more radiation – it is likely to be required if an open surgical intervention is planned for more complex fractures. 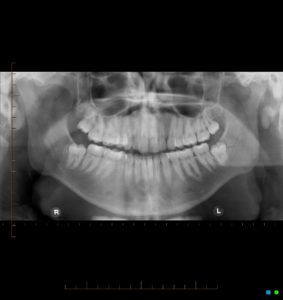 Conservative management is most commonly used in paediatrics. Condylar fractures (as are more often sustained in the younger and female patients) without significant malocclusion typically heal well with a conservative approach. This may sometimes use non-surgical stabilization around the area.

Going forward the child might need input from the paediatric MDT to support pain management and hydration and nutrition as a jaw injury may lead to pain and fear surrounding oral intake. A soft diet is typically required, as well as a mouthwash to reduce infection risks with any intra-oral lacerations or surgical incisions.

Functional rehabilitation includes range of motion exercises with large lollipops or challenging the child to fit more stacked tongue depressors into their mouth. This jaw physiotherapy helps reduce ankylosis and TMJ dysfunction. This is particularly important after prolonged immobilization or in younger children who may be more reluctant to move normally following their injury.

A small number of fractures will need more formal surgical fixation. Depending on the dental stage, stable teeth may be used for fixation (inter-dental wiring). Splints may be held to the bone by circum-mandibular wires passed through the gums. Some fractures require formal maxillomandibular fixation, in which the mandible is stabilized by attaching it to the maxilla – colloquially referred to as “wiring the jaw shut.” This has significant implications for nutrition as the patient will need a fully liquid diet while the wires are in place.

Occasionally open reduction and internal fixation is needed, although major reduction is rare in paediatric patients, whose bone elasticity means they are more likely to sustain greenstick fractures. Some kind of stabilization, whether external or internal, is more likely to be necessary when multiple fractures are present as the jaw is in constant use so function relies on stability.

You try to talk to Jason a bit more about what happened. He remains guarded but he says “some guy” punched him. He says this was a mugging and he doesn’t want to report it to the police. You explain that he will need to be collected from the A&E department by an adult and he grudgingly agrees you can call his mum. When she arrives she convinces him to phone the police.

The nurses have checked with social services and it turns out he has a named social worker following some truancy and fights at school, although he is not on a child protection plan. You explain to Jason and his mum that their social worker will be notified of his attendance.

You organize him a prescription for some codeine and laxatives to take until the pain subsides and advise him about simple analgesia as well. He manages to drink a can of fizzy drink in the department. His mum says she’ll make him soft food at home and if he can’t manage to take food orally they will come back.

Forshaw RJ. Reduction of temporomandibular joint dislocation: an ancient technique that has stood the test of time. British Dental Journal. 2015; 218:691–693