As my youngest daughter continues to her quest for her two front teeth, my eldest has lost two of hers. They came out naturally with minimal fuss though as they were hanging on by a (peri-odontal) thread she asked me lots of questions about teeth. Given that I was not trained as a dentist I thought I had better do a little more research on the matter.

The first question I was asked after “How much is the Tooth Fairy going to leave?“*, was “When am I going to get my grown up teeth?”

If nature takes its course then the deciduous teeth will fall out in time to be replaced by their more permanent counterparts.

Unfortunately children are inquisitive creatures. prone to tripping over, falling off bikes and colliding in mid-air on the trampoline. First up – let’s get a handle on the language used to describe dental injuries.

Concussion – just like receiving a bump on the head, the tooth is tender to touch or tapping but does not move

Subluxation – the tooth is tender and is mobile

Intrusion – the tooth is impacted into the alveolar bone

Now that we are speaking the same language, how should we manage these injuries? Given that deciduous dental damage may disrupt the development of their successors in up to 69% of cases, we should be able to say a little more than “You should go to the dentist.” Intrusion and avulsion are the biggest culprits. This disruption may manifest as anything from discolouration or enamel opacities to non-eruption of permanent teeth.

Parents may not be aware of the inciting trauma but become concerned when they notice a grey discolouration of the tooth. There may be underlying pulp necrosis but this may be asymptomatic. As the damage is only cosmetic no real treatment is needed, other than regular follow up to ensure that osteitis is detected early.

The wobbly tooth requires observation only. It should settle down within a couple of weeks provided no apples or hard toffees are eaten. If it becomes painful and more loose then a localised infection may have taken hold.

With the tooth already half way out there are two options – take it out or push it back in and splint it in position.

Because the growing maxilla/mandible is relatively demineralised compared to that of an adult, when a toddler falls flat on their face they are more likely to push the tooth into the soft bone (intrusive luxation) than to fracture the jaw. Management of the intruded tooth depends on the direction and degree of intrusion as well as the presence or absence of an underlying alveolar fracture.

Because the intruded teeth – most commonly the incisors –  follow the line of the roots. i.e. in a labial direction – they are pushed away from the waiting secondary dentition. A watchful waiting approach, in a case series by Altun et al.  found that 78% re-erupted, 15% partially erupted and only 7% remained impacted. The majority re-erupted within 6 months. If they intrude towards the underlying permanent teeth then they should be removed to avoid permanent disfigurement.

Once a deciduous tooth has come out there is no point in replacing it. Trying to force it back into the socket may lead to damage to underlying tissue and subsequent problems with permanent tooth eruption. If it is a permanent tooth then it should be handled with care, by the crown. If it is replanted then there is a chance it will take but it might be some time before this becomes obvious.

If it has come out and the parents and child have no idea where it is then consider taking a chest radiograph. You may not find the tooth but missing an inhaled incisor could be disastrous.

These microcracks require no acute treatment but indicate underlying brittle enamel. They may require resin sealing at a later stage.

So what sort of dental hygiene should the parents perform?

And what about dental fractures?

First of all, let’s review the normal anatomy of a tooth. 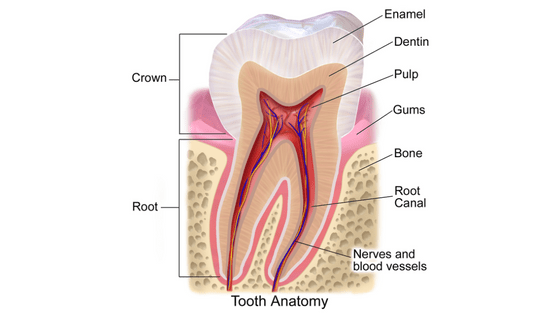 Those of you who have gone on to study for Fellowship exams may be aware of the Ellis classification system of dental fractures – something that no dentist would actually use. To avoid confusion it might be better to refer to: 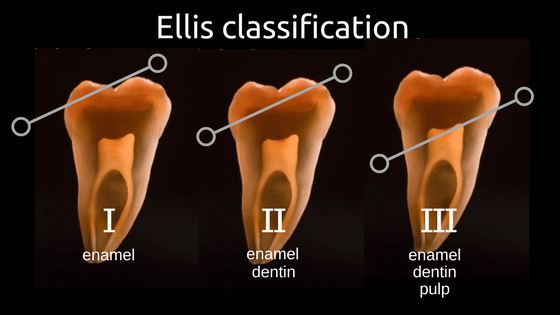 Enamel fractures just require the smoothing and sanding down of sharp edges.

Enamel-dentin-pulp fractures are the most serious of the three. If the pulp cavity is not capped off with something like calcium hydroxide paste apical periodontitis and failure of root maturation may occur. The alternative is just to remove the tooth and be done with it – not a viable option in the case of permanent teeth.

There is no evidence that prophylactic antibiotics need to be given in these dental fractures.

If you are not sure then you should consult your local maxillo-facial service.

But perhaps the stubborn baby teeth will not come out despite all the tongue wiggling and face pulling the child can muster. Is there anything they can do to tempt the Tooth Fairy? Once it has been worried to the extent that it is literally dangling by a thread you can grab the tooth with clean hands and twist it out. Alternatively you can loop a piece of dental floss around the tooth, as far down as possible, and quickly yank it out – kind of like this…

*Finally, how much should the Tooth Fairy leave under the pillow when they come out?

The Tooth Fairy is not just an awful film starring Dwayne ‘The Rock” Johnson (it scored a grand 18% on Rotten Tomatoes) but a tall tale that has only been around for about 90 years. Before she (?he) flitted into our children’s bedrooms slipping shiny coins and more under pillows, parents told stories of La Petite Souris (in France) or Ratóncito Pérez (in Spain). This creature would sneak in like a rodent Indiana Jones swiping his shiny enamel treasure and replacing with a slightly weightier monetary equivalent.

I ran a Twitter poll to find out just how much La Petite Souris would have to leave behind. For children in Australia the almost unanimous vote came out in favour of a shiny two dollar coin (unless it was a first tooth then some recommended five dollars). For our international readers that works out as £1.19 or US$1.52.

Fried I, Erickson P. Anterior tooth trauma in the primary dentition: incidence, classification, treatment methods, and sequelae: a review of the literature. ASDC journal of dentistry for children. 1994 Dec;62(4):256-61.