4-year-old Calvin received the best Christmas present ever – a trampoline of his very own! After spending the morning bouncing with his older brother, Iggy, he started to complain of pain in his left knee.  The trampoline was safety-netted so his parents were happy that he couldn’t have fallen out and so, mystified that he still refuses to walk, he is brought in to the emergency department.

How common are trampoline injuries?

Trampoline related injuries are uncommon in adults. There were only 50 reported in Victoria between 2007 and 2013 with lower limb injuries being the most prevalent. 2200 children presenting to Victorian emergency departments within a similar time-frame. Victorian data demonstrated an 18% increase in multi-user injuries with an over-representation in children under 4 years old.  With Christmas approaching and trampolines being on many children’s’ wish lists the Victorian State Government has put out a press release to make parents more aware of the dangers.

Has legislation made any difference?

The Australian trampoline standard (AS 4989-2006) is a voluntary industry standard that recommends the protection of sharp edges, spring and frame padding. The Standards Australia Trampoline Committee is looking to make these standards mandatory.

Whilst injuries related to the makeup of the trampoline itself (i.e. spring and frame injuries), as well as fall injuries has decreased, there has been an increase in injuries related to one or more users. The use of safety-netting to stop kids falling off has not been shown to decrease the number of injuries. Parents may be falsely reassured that they do not need to supervise their kids once they are enclosed.

How are these kids injured?

Some of them fall into the structural framework of the apparatus but they are more likely to bump into each other or sustain a lower limb injury as a result of a double-bounce. If you really want to look into the physics of the double-bounce then read this riveting paper.

Are there any trampoline specific injury patterns?

Lower limb injuries are more common than upper and subtle proximal tibial physeal fractures may be difficult to detect on initial x-rays and require a bone-scan to make a delayed diagnosis. As the child bounces, often with another occupant, the knee hyperextends as is subjected to an axial load leading to a small torus or buckle fracture in the region of the physis. They may present with reluctance to walk after playing in the yard. 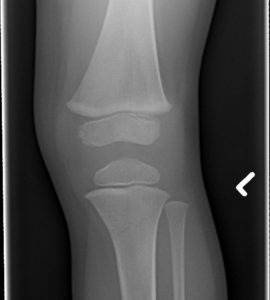 There are some less common injury patterns such as manubrio-sternal dislocations, vertebral artery dissection (due to cervical hyperextension and rotation) and atlanto-axial subluxation.

An X-ray revealed no obvious abnormality, even when the anterior tilt angle was taken into consideration. He was placed in an above-knee back-slab and referred on to orthopaedic outpatients for evaluation. A bone scan performed a few days after the injury, made the diagnosis of small fracture more likely. There were no adverse sequelae of this delay in diagnosis.

3AW talk to Warwick Teague (@doctorwozza) – Director of Trauma at the RCH, Melbourne