Without SMACC there would be no Don’t Forget the Bubbles. But little did Tessa and I know that despite being at the same conference it would be another four years before we actually met in person at DFTB17 in Brisbane.

Nobody knew what to expect at that first SMACC as we sat in the dark waiting for the conference to begin.  I had just signed up with Twitter and was just excited to be in the company of people who thought the same as me, who were excited to learn, and were using this new thing called #FOAMed. As I am the shy retiring type I barely said hello to people that now, a lifetime later, I would be proud to call friends. Instead, I just sat in the audience and absorbed all the knowledge and positivity that flooded my way.

Flash forward a few years and those friendships, forged online, have grown as Twitter avatars are replaced with real people. No longer am I as shy to go up to someone I have never met in real life and I’m glad others have taken up the challenge too (Andrew and Sarah,  I am looking at you).

Tessa and I feel very privileged to have played some small part in the success of SMACC as we run the very final SMACCmini paediatric workshop. If you couldn’t come along then here are some of the things you missed.

Trish is no stranger to the DFTB ethos and as a neonatologist stopped to make us reflect on one of our basic assumptions – just who is the patient.  Just because our tiniest patients lie in their cribs, helpless, requiring help with all of their daily cares, does not mean that we should not consider them as people. It might be an alien thought to some – that the patient in front of us hears what we say, and how we say it, but they are not just a disease or a problem to be dealt with or the one in pod 3. They are a person with a name.

Seeing the team through the eyes and ears of the patient, Trish helps us enter the sensory (and often-overstimulating) world of the NICU.

Why not take a look at this paper on some of the ways we can start treating the patient and not the disease.

Justin Morgenstern, one of everyones favourite Canadians, has recently relocated to our side of the world and is practicing in New Zealand. Knowing that he is such a fan of evidence based medicine we set him the task of finding out if sucrose is as good as we think it is as an analgesic in neonates.

Here, for your delectation, is his take on analgesia for kids.

He started by challenging a fundamental assumption – that we can accurately tell whether a neonate is in pain or not. Or, more accurately, he challenged our assumption that we could tell when a medication worked.  We know the limitations of the traditional Wong-Baker Faces scale in older children and most of us probably use some combination of our clinical gestalt and the FLACC (Face/Legs/Arms/Cry/Consolation) score in neonates. But is it some sort of surrogate marker for distress, rather than pain? If fMRIs show no difference in an infants brain when they receive sucrose does that mean it does nothing for pain?

Of course there are a lot of things we can do that we know do work:-

Camille Wu last spoke for us at DFTB17 on testicular tribulations so it was a pleasure to welcome her back to join us to talk about surgical causes of bilious vomiting. 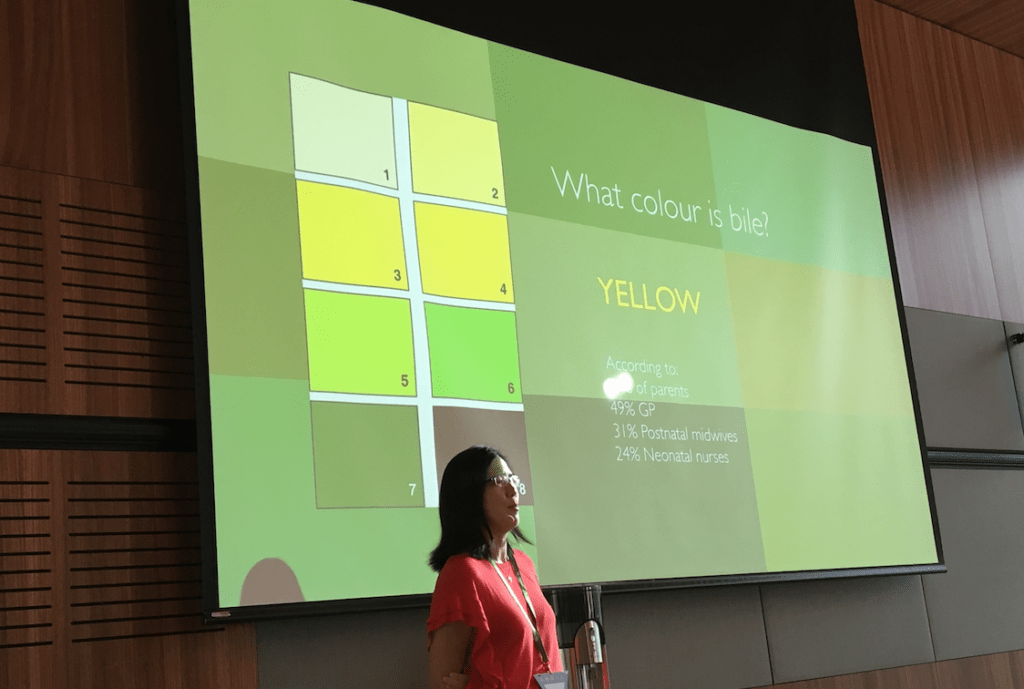 Rather than put words in a parents mouth she suggested asking exactly what colour was the vomit. If they answer Pantone 2565C then you are in trouble. Green vomit suggests a higher up obstruction that might require surgical intervention and certainly requires surgical assessment. Likewise rather than asking if the vomit was projectile, it is better to ask “How far did it go?”

Whilst it is important to remember that there are a number of significant medical causes of bilious vomit (such as sepsis and CPAP belly) we really need to be concerned about surgical causes. Camille broke these down into mechanical causes and functional causes.

The more proximal the obstruction the less bubbles of gas you will see on initial imaging. Camille reminded us that early imaging and intervention can make all the difference. If in doubt, pick up the phone, no matter the time of day or night.

Linda Durojaiye is a staff specialist at Sydney’s Children’s Hospital at Randwick. In her talk on leadership and patient safety she owned up to mistakes that have been made and shared some lessons from her department on how they have created a safer environment where everyone is accountable. Given that we have no control over who comes in we need to take ownership of what happens to them once they pass through our doors.

Linda and her team created a culture of safety – starting with regular team huddles to identify potential threats to safety. Using a strong leadership team they created a model of care that engaged both medical and nursing staff as well as the patient/parent consumer. She highlighted the resources freely available on the Institute for Healthcare Improvement website.

If you want to know more about the Clinical Emergency Response System then you can find it here. 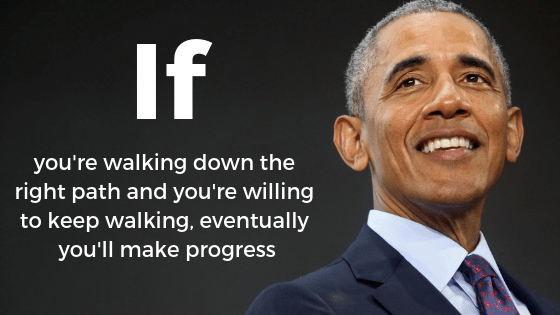 If your idea of virtual reality is still stuck in the last century and The Lawnmower Man (a poor 34% on Rotten Tomatoes) then you might not be aware of some of the advances that are putting the technology in the hands of normal people. Andrew Weatherall is the co-chair of paediatric anaesthesia at the Children’s Hospital at Westmead and has been looking at the role virtual reality may play as an adjunct to standard anaesthesia techniques.

He has written about his experiences here. Whether as a means to reduce anxiety before a procedure or as a distraction from the procedure itself virtual reality is no longer priced out of possibility. With Google Cardboard costing just a few bucks and lots of open source software available it won’t be long before we see more departments trying it out. We hope to hear more from Andrew and his team in the near future to see how they are going.

Carrying in on with technological advancements in paediatrics Jas Coles-Black from the 3D lab at the Austin in Melbourne made the audience realise just how affordable 3D printing can be. A technology that once cost six figures is now cheaper than the average consultants coffee habit. After a quick jaunt through the various methods of printing she went through some of applications relevant to paediatric practice. With printable task trainers costing just a couple of dollars (after the capital expenditure) we could all have our own paediatric can’t intubate – can’t oxygenate model. Or perhaps you want your trainees to learn how to ultrasound the neonatal spine to improve their success at lumbar puncture – a task trainee is yours for less than a latte.

3D printing can also be used to help patients understand complex ideas and a number of cardio-thoracic surgeons have used 3D printed models of congenital heart defects to help explain complex anatomy. We are looking forward to hearing more from Jas about this exciting technology and how it can benefit all of us. And, if people are interested, we could create our very own DFTB 3D printing workshop at a future conference.

SMACCmini was competing against the very practical paediatric ultrasound workshop but we couldn’t make it through without mentioning it at least once. Tom Rozen, intensivist at the Royal Children’s Hospital, used the example of René-Théophile-Hyacinthe Laennec’s (yes, really!) most famous invention, the stethoscope, to demonstrate how medical fashion has changed. A device that once took up an entire room can now fit in your pocket and with ultra-cheap, ultra-portable devices entering the market it will not be long before clinicians can have a device of their very own.

If you want to know what all the fuss is about then why not sign up for one of our pre-DFTB19 workshops. 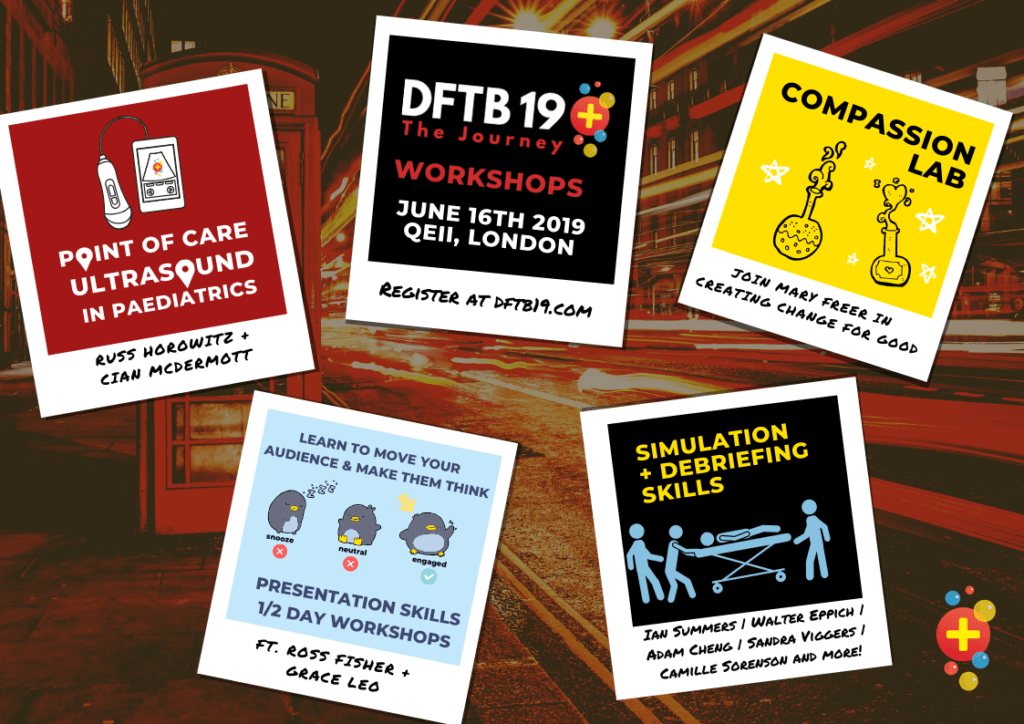 Mr Fisher was set the challenge of making talking about constipation interesting and he succeeded. From his opening Limahl tribute to the crowd singalong he soon had us tapping our toes to the 1983 Kajagoogoo classic. He began by asking us to turn to the person sitting next to us and take a bowel history. After a round of sniggers a fair percentage of the delegates were unable to complete the task. Fortunately I was sitting next to Tessa and we know each others bowel habits intimately. If we are too shy shy to ask a grown up about what they get up to in the toilet no wonder we are pretty awful at asking children. Most children are all smell, noise and little substance in the bathroom so the only way to really find out what they are up to is to ask them, in their own language. 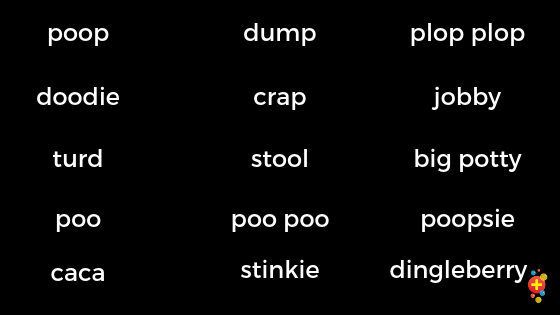 Constipation and its consequences can be stigmatising to a child and so the mindful clinician should sit and listen to the parent and their concerns, without judgement. Treatment can be a long and drawn out affair taking as long to fix as the child has had the problem for.  Take a look at our series on constipation here.

The final talk of the morning, by Bec Nogajski, brought it all together and reminded us of the importance of teaming. We’ve all been a part of dysfunctional teams and Bec challenged us to look at our role in the team, not as a passive sheep to be lead around, but as an integral unit with worth. There are many ways of finding out how you might fit in the team – Belbin’s team roles, DISC, Myers-Briggs (INTJ in case you were wondering) – but it is worth considering  that there is no perfect recipe for an effective team.

The team sets the behaviour, what is tolerated and what is not. As David Morrison said, “The standard you walk past is the standard you accept.” So do you check your mobile phone during clinical handover, and allow others to do the same or is this type of behaviour below the line?

Our eternal thanks, as always, to the SMACC OC throughout the years, especially, Chris, Roger and Oli who made such an impact on four aspiring paediatricians that they decided that they could run their own conference. If you want to see what all the fuss is about then there are still a handful of tickets left for www.dftb19.com in London, this June.