Home > View All > A Christmas Carol

Everyone has holiday traditions – one of ours was watching A Christmas Carol. Whether you prefer George C. Scott, Michael Caine, or Bill Murray as the cantankerous Ebeneeezer Scrooge it is hard to watch it and not think ‘What if?’. Charles Dickens serialized tale was first published in 1843 and nearly 120 years later ‘A Christmas Carol in Prose, Being a Ghost Story of Christmas‘ is still one his most popular works.

It tells the tale of Mr Scrooge, a miserly banker,  and how the world is not quite as he sees it. On Christmas Eve, after being particularly hard on his clerk, Bob Cratchit, he settles down for the night and his visited by four ghosts*. Let’s see what the ghosts of Christmas Past, Christmas Present and Christmas Future, would have to say about us, at Don’t Forget The Bubbles.

The Ghost of Christmas Past

The four of us started DFTB in 2013. It was a place for us to store our notes, ask questions and try to answer those tricky conundrums that had been puzzling us. Before we launched we traded e-mails back-and-forth, late into the night, coming up with what we wanted the website to be. We wanted it to be a go-to resource for anyone involved in the care of children. We wanted it to be collaborative and we wanted it to be more than the four of us, typing away in isolation.When we first started we had very little idea if people were actually looking at what we were writing, but in time the community around DFTB has grown, as has the online FOAMed community.

So, in the spirit of transparency we want to share our stats with you. Our colleagues at St Emlyn’s have recently done the same and we hope it will encourage more people to get involved with this form of online education. 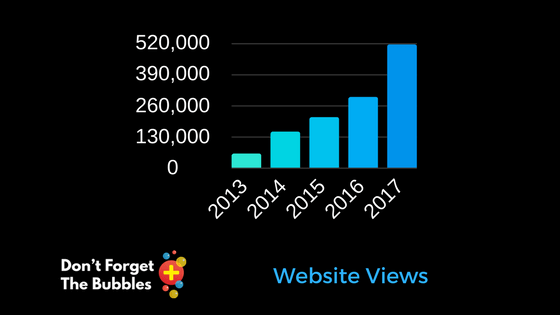 In terms of pages views, we have been growing year on year and have managed to hit 515,000 this year alone. This is something we are immensely proud of but we certainly could not have done it without all of those contributors that have spent hours writing content for us. 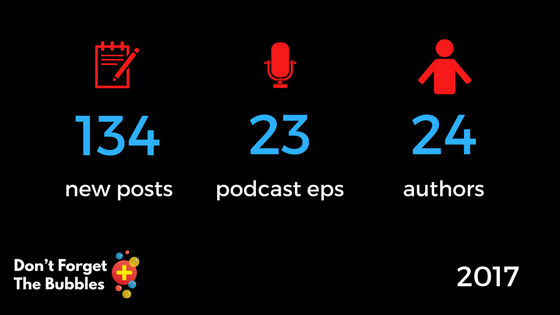 Although the four of us do a lot of work to make sure that there is new content every week, our ever increasing roster of authors, means that we are creating a truly collaborative blog covering a diverse array of topics. No one of us can be an expert in every field and and so we feel privileged that so many experts do give us some of their time. 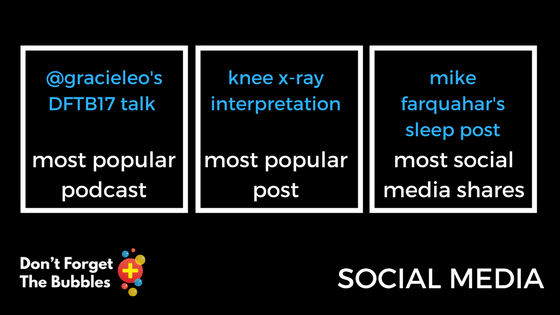 2017 was a landmark year for us. We ran our first conference, DFTB17, finished up our two year collaboration with Emergency Medicine Australasia, launched a podcast, surpassed 1 million page views… and had twins.

The Ghost of Christmas Present

As we look at where we are now, this very minute, we are scattered around the globe, with Tessa residing in the frozen North, whilst Henry and Ben live a time-zone away from Andy in ever-changeable Melbourne. Exams are complete and, with one conference under our belt, we take some time to be with our families before crashing headlong into the plans for DFTB18 (more on that later).

Although we put plenty of time, money, and effort into DFTB, we do it because we love it. And as it’s the festive period, we thought we should share some sentimental reflections.

Ben: DFTB is what I hope all of our workplaces will be one day. Psychologically safe spaces where all of us are good enough but none of us are as good as we want to be. Somewhere we learn from each other’s strength’s and do more than we ever could alone. #collaborationrocks.

Henry: DFTB is a truly “pro” team. I am energised by the opportunity – the freedom – to innovate that the DFTB team engenders. Daily I am amazed at (and thankful for) our team’s energy and enthusiasm. DFTB is the fuel to the flint of unanswered questions. How can this be done better? How can we improve Care? Or communication? In the throes of exhaustion or just ‘getting by’ at work, it is the idea of DFTB that works to amplify some nagging notion of incongruence, of unthinking, to illuminate what is yet unknown. And to ask again, Why? More than any other creative or professional project, the DFTB team inspire me to do the work. To show up.

Tessa: Being able to be part of such a wonderful team is what makes all the hard work worthwhile. Andy, Ben, Henry, and I are lucky enough to have a skill mix that just works, and we know each other’s strengths and weaknesses well. We speak almost every day and are on the same page, working together to make DFTB as great a resource as possible. Being part of the team is truly an honour.”

Andy: It has been a busy year for me, with the conference and the website. Increasing our author base has really helped but I do miss writing long and  languid posts on the marginalia of paediatrics and human nature. I hope to get back to that again next year. My highlight, though, was finally being able to sit down and have a coffee (or tea in Tessa’s case) in Brisbane with the friends I have been working with for four years.

The Ghost of Christmas Future

So what does the future hold for the DFTB team? We certainly hope to bring you more quality reports and insights into the world of paediatric medicine. We hope to extend out network of collaborators to make sure you a reading from content experts.

We also have a little thing called DFTB18 coming up in August. In case you were studying hard for exams and so missed out on DFTB17 we are running a three day event in Melbourne (August 27th to 29th 2018) with optional workshops on the day before. Like a lot of sequels it is hard work, making sure there is the right mix of science and story. We’d rather create an Empire Strikes Back  rather than a Speed II: Cruise Control but that can be tough. Expectations of awesomeness have been set but it is worth remembering that, more than just the talks or the food or the coffee, it is the people, the delegates, that make a conference. So, do yourself a favour and treat yourself or your partner to just one more Christmas gift, a ticket to DFTB18.

At the end of A Christmas Carol old Scrooge recognizes the error of his ways, and after throwing a shiny silver coin to a passing street urchin to purchase the largest goose in the land, he makes his way to the home of the Cratchits. In his nightmare vision of Christmas That is Yet to Be, the spirit showed Scrooge the disregarded ‘crutch without an owner‘ of poor old Tiny Tim, laying in the corner. By showing kindness though, he did truly make a difference to one child’s life.

What was actually wrong with Tiny Tim Cratchit?

“No, no! There’s father coming,” cried the two young Cratchits, who were everywhere at once. “Hide, Martha, hide!”

So Martha hid herself, and in came little Bob, the father, with at least three feet of comforter exclusive of the fringe, hanging down before him; and his thread-bare clothes darned up and brushed, to look seasonable; and Tiny Tim upon his shoulder. Alas for Tiny Tim, he bore a little crutch, and had his limbs supported by an iron frame! [“Stave Three: The Second of the Three Spirits,” Household Edition, p. 20]

The internet is awash with medical detectives who have scoured Dickens biographic and bibliography for any clue as to what fate could have befallen the smallest Cratchit. It has to be something that could be deadly (as evinced by the Ghost of Christmas Yet to BE) but it also has to be curable. For it to be curable in a time without antibiotics, biologicals or ketamine there is a narrow playing field.

Chesney, in his 2014 JAMA Paediatrics article, posits a number of environmental factors that may have led to Tim’s small stature and failure to thrive, as well as his limp.  Given that around 60% of children at the time of Dickens writing had Rickets and around 50% had signs of tuberculosis, they have to be the front-runners. Whilst a better diet, funded by Mr Scrooge and increased exposure to the fresh air and rays of the sun may have imprived his Vitamin D load, it is unlikely that TB could be cured with cod-liver oil, a common remedy at the time.

Lewis put forth an argument of a different kind, a decade earlier, that Tim was suffering from Renal Tubular Acidosis. A course of ‘tonics’, essentially bicarbate containing drinks, make have helped stave off the potentially fatal effects of RTA, namely hypokalaemic muscle paralysis, nephrocalcinosis, renal failure and, eventually, death.

*Don’t forget the ghost of Jacob Marley, his partner.