Article 1: What’s on the kids Christmas list this year?

At the beginning of December I made my children sit down and write a letter to Santa to explain just what they wanted him to bring down the chimney. The two year old had a simple request – Smarties – but the eldest asked for something that I had never heard of involving unicorns and slime. Where on earth did she get that idea from? Perhaps this paper has the answer.

Pine et al. classified television viewing as high, moderate or light depending on a self-reported survey of viewing habits.  They then drilled down a little further to determine if the kids watched mainly commercial television channels or those free from advertising. The study was done in the UK so think BBC vs ITV. A couple of weeks later they took these 98 children and had them take part in a little exercise where their teachers had them write a letter to Santa. Those children who had watched more television were more likely to ask for named products (Unicorn Poopsie Slime Surprise) than generic ones (a doll, a toy car)

Children watch, on average, 2 1/2 hours of television a day. If they only whispered to Santa what they really, really want they might be disappointed. Take a look at their viewing habits and you might gain some valuable insight into their deepest desires. Alternatively, don’t let them watch any television and they might be happy with that generic dolls house.

Unicorn Poopsie Slime Surprise is a real thing according to my 7 year old. I must keep her away from the television in the future.

One of the methods of distraction employed by one of our play therapists is not blowing bubbles or playing episodes of Peppa Pig on the iPad, but her voice. Nothing more expensive than simply singing to children to soothe their anxieties and I have honestly seen children fall asleep during a painful procedure to her dulcet tones.

Given the amount of singing that occurs at Christmas I wondered if there is any evidence behind this? And there is!

A professor of Music Therapy (Shannon de l’Etoil) has investigated the impact that a mother’s song has on their infants. Her pivotal work examined 6 different approaches to engaging a 6-9 month old: their mother singing an assigned song, their mother singing a song of the mother’s choice, both mother and infant listening to recorded music, the mother reading a book, the mother playing with a toy and a stranger singing an assigned song. All approaches were videotaped and a bespoke cognitive score demonstrated engagement through singing was as powerful as by book or toy and much higher than if recorded music was used. There was evidence that if initial infant responses were negative the mother’s would adjust the tone and pitch of their voice to re-engage them.

Singing frees the soul and is a popular Christmas pastime. Maybe if you’ve run out of bubbles or your ipad is out of juice perhaps consider asking the mother to sing to the infant* you are cannulating, you never know it may help!

*whether a festive tune adds additional benefit has yet to be studied..

Article 3: How do you get kids to eat their greens??

Does spending more time and more money on food for pre-schoolers lead to better adherence with dietary guidelines? This NSW group lead by Dr Rebecca Wyse, surveyed 396 parents of preschoolers to identify whether their child’s fruit & vegetable was in keeping with guidelines, whilst identifying a number of factors regarding compliance, using a standardised instrument, the Childhood Dietary Questionnaire. It’s worth noting that Dr Wyse’e group, based out of the Newcastle region, are prolific publishers, and have published many similar articles.

For this survey, the population was generally educated to a higher level, with a slightly-higher than average household income by comparison to the Australian mean at the time (2010). With this in mind, 63% of children had their diet adhering to guidelines. That said, kids also at a lot of ‘junk’; preschoolers frequently exceeded the dietary guideline for occasions of the non-core foods subscale. As for doing the prep; the mean time was 120 minutes(!).

For me, the really interesting part of this paper is the discussion; a beautifully scientific and pragmatic approach to weighing up some of the challenges of increasing fruit and veg from an ecologic approach.

Article 4: Santa Claus is coming to town but which medical specialties are on the “Nice” list?

The age old stereotypes of medicine persist into the 21st century. Paediatrics? Big kids with bubbles and stickers, who mostly watch cartoons at work. This team asked which of the specialities is more likely to be on Santa’s “Nice” List, with the theory being that this actually depends on the quality of food left for him on Christmas Eve.

The 3 specialities who were 100% nice based on responders included Dermatology, Clinical Genetics, and Nuclear Medicine. The remaining specialties in the nice list, Renal, Public Health, ICU, Retrieval Teams and Paediatric Surgery, made the cut based on the majority stating they follow recipes when cooking.

Unfortunately, this leaves a lot of specialities on the naughty list, including paediatrics!

Speaking from personal experience, just because you don’t follow a recipe does not mean your Christmas baking will end up a disaster (it occasionally does – ask my husband). I would advocate for a different study to try and assess which specialties belong on the “Naughty or Nice” list. Perhaps “number of coffees seniors bought for juniors over the year” or “discharge summary completion rate” or “average response time to pages”…so many options to choose from! Who is up for the challenge next year?

Article 5: Can you crack the codes this Christmas?

In hospitals we code various diagnosis, symptoms, tests and procedures in electronic health records. Coding can help with  collating accurate and reliable information on patients for their own care, but also on a broader scale to help with research, billing and improving patient safety.

Currently in Australia we use multiple coding systems for different purposes including the ACS, ICD 10-AM and ACHI. In the UK, Read coding is  used for clinical documentation of health data but there are plans to replace this with SNOMED (Systematized Nomenclature of Medicine) terminology. SNOMED has benefits including being a numeric only based coding system with a  wide range of both clinical and non clinical codes which will help improve accuracy and specificity in coding.

When you’re on your next shift at work, you may enjoy exploring the many avenues that clinical coding covers for. This article is well worth a full read, and to the author’s credit, I particularly enjoyed the demonstration of Read coding in figure 3; “a tale from a general practice somewhere in the middle east…” 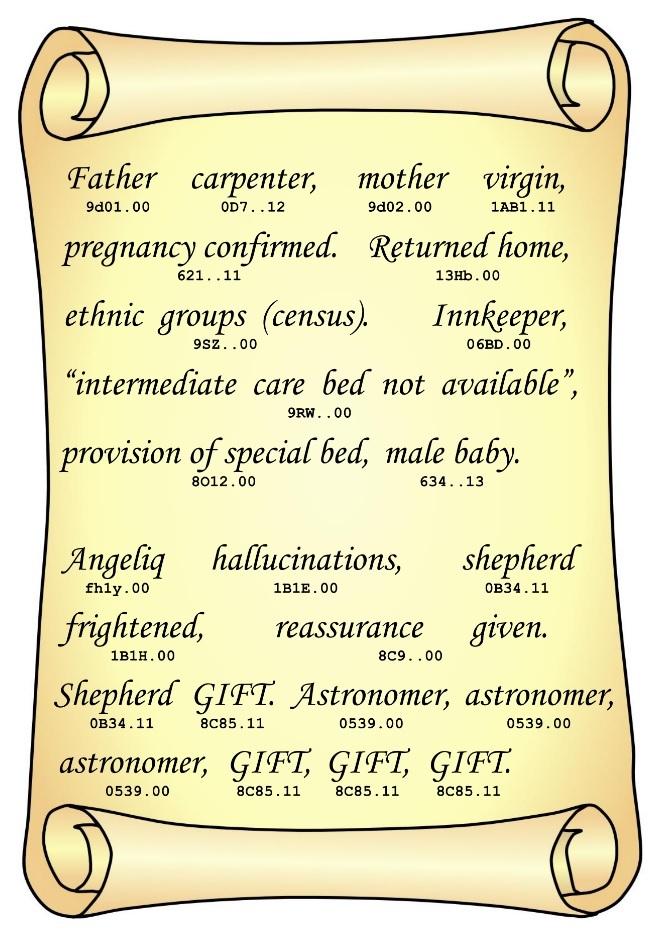 This will be the last Bubble Wrap for 2018! Please join us for the upcoming #DFTB_JC running on twitter on the 27th of December UTC 2000 (otherwise known as 0700 EST on the 28th of December) in our collaboration with Archives of Disease of Childhood where we will be covering a recent  paper on how we’ve been managing Paediatric Meningitis. The paper has been kindly made FREE access for this month so that you can read, dissect and debate. Check it out here:  https://bit.ly/2ru56J5

The Bubble Wrap will return on the first Monday of February and we all wish you a very Merry Christmas and Happy New Year.

If we have missed out on something useful or you think other articles are absolutely worth sharing, please add them in the comments! That’s it for this month. Many thanks to all of our reviewers who have taken the time to scour the literature so you don’t have to.