Life as a parent can be tough – early mornings, convincing your child to eat, having time for yourself. Sometimes you just need five minutes to think.  So what do you do – thrust your mobile device in front of your 3 year old?  Today we explore some of the good, bad and ugly concerns around electronic media.

US data shows that children (between the age of 8 and 18), on average, spend 7 hours and 38 minutes interacting with electronic media (so phones, televisions, tablets, games consoles) every single day!  This equates to 53 hours a week. With most of them being able to multitask (watch a film whilst texting and playing Minecraft) they may actually consume even more. These devices are often used as an electronic “babysitter” keeping children quiet on long car journeys as their parents try and halt the incessant cries of “Are we there yet?”. A whopping 63% of respondents to Deloitte’s 2014 Australian Media Consumer Survey owned an electronic tablet with 81% owning a smartphone. Over half (53%) of these respondents were ‘digital omnivores’ consuming more than one type of electronic media at one time. Compare this figure with similar data from the US (37%) and Japan (17%). Children of parents of a lower socioeconomic level spend more time in front of a digital babysitter.

As younger and younger children are exposed one wonders what effect this will have on the way they interact with the world. We’ve seen examples of children trying to swipe images on flat screen televisions or move fish around a fish tank by pressing at the glass, thinking they are icons in a game. But are all devices evil?

Children learn by copying –  watching their parents and siblings. Perhaps electronic tablets might be of use for children who have difficulty in social interactions. A number of small studies have used iPad-based video tools to help autistic children acquire a number of social skills through imitation. These apps are known as augmentative and alternative communication (AAC) apps. As well as improving non-verbal communication apps have been developed to improve attention span, time management and dealing with negative feelings.

Educational literature reports that teachers like using tablets because they help foster independent learning, though the cynical observer may argue that they require less of the teacher than formal pedagogy. Short term benefits aside, there has been no research into the potential middle to long term effects. It has also been extensively used in normal classrooms to increase collaboration and engagement between children but at the risk of being a distracting presence.

In the hospital environment actively interacting with an iPad, rather than just passively viewing an episode of Peppa Pig has been shown to reduce both the anxiety and pain of injections as mentioned in this vodcast as well as being used to create an immersive, distracting environment for the induction of paediatric anaesthesia. 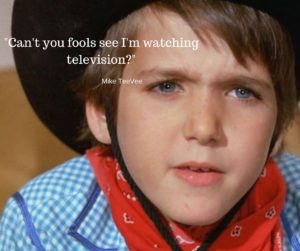 Interestingly the detractors of early iPad use point out that some social skills may be lessened by early usage. Normal gaze following develops between six and nine months of age. As babies observe an adult turning their head (with open eyes) they also turn to look to see what the adult is looking at. If they observe an adult on-screen turn to look off-screen they do not seem to understand. Does this delay development? The ‘Cues-Filtered-Out‘ theory postulates that some of the lack of non-verbal cues in these computerised interactions may lead to problems with interpersonal communication in later life. There is not enough data to draw any conclusions but it is an interesting area of research.

We’ve all heard of typical teenage behaviour, grunting responses to repeated questions, unable to draw their eyes away from their mobile phones. An enterprising US researcher took a group of teenagers away on a five-day, screen-free summer camp and found that, compared to pre-camp testing, they had a much greater ability to respond to non-verbal cues. We know that if parents use their phones whilst they could be interacting with their children, the children show increasingly escalating behaviour and tantrum-throwing in order to get attention. Perhaps all of us would benefit from a digital diet?

Does the ability to swipe the screen render children less able to manipulate physical objects? Distracting electronic play may reduce early, inquisitive interaction with the physical environment as well as social-emotional development. 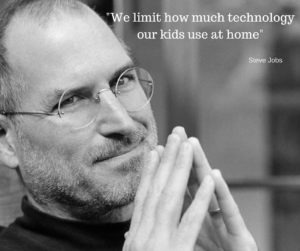 Whilst poorly communicating teenagers may seem to be the norm, one must also consider the darker aspect of exposure to screen time – that of the ever rising incidence of internet addiction. Whilst internet addiction is not a formally recognised disorder as per DSM-5, the existence of problematic internet usage (PIU) is certainly talked about in the literature. Griffith’s model of internet addiction suggests the following diagnostic criteria:

Increased (beyond the norm) use of the internet has been associated (but not causally related) with an increased incidence of ADHD as well as increased symptoms of depression in teenagers. In much younger children the iPad can become a fixation device, like a favourite toy, that is hard to drag the child away from without starting them screaming and wailing.

The risks of online social media engagement are beyond the scope of this post.

Electronic entertainment, whether it is on television or on a handheld device is here to stay. Like most of technology it can be use for good or ill and so we all need to consider its impact. The AAP recommends taking a media history as part of the social history of every child asking two important questions:

How much recreational screen time does your child or teenage consume daily?

Is there a television or internet-connected device in the child’s bedroom?

They recommend that such devices should not be used by children under two years of age.In fact the French government have banned children’s television programmes for under two year olds. Whilst media professionals may argue that this ‘foreground’ media is designed to be watched by parent and child together in order to facilitate interaction it is often used to make daily living easier.  Parents must also be wary of the ‘background’ media – programming that is intended for adults – that is on in the house. Whilst it is often in the background for the children it is in the foreground for the adults, reducing parent-child interaction.

Take some time to reflect on your own reliance of electronic media.

(Editors note – whilst I have referred to iPads throughout this post, you could just as easily substitute any other electronic tablet or device)

Radesky JS, Schumacher J, Zuckerman B. Mobile and interactive media use by young children: The good, the bad, and the unknown. Pediatrics. 2015 Jan 1;135(1):1-3. Full text here