A child is brought into Emergency with fever and lethargy, having returned from visiting relatives in India over the school holidays. You work your way through the considerations of fever in a returned traveler, and within hours the lab calls to report the presence of malaria parasites evident in the blood film. What next?

Despite significant gains in combatting malaria over the past 100 years, the malaria parasite continues to cause significant morbidity and mortality globally, responsible for 230 million clinical infections and almost half a million deaths each year. That’s 1,100 deaths a day, of which 745 occur in children < 5 years. To put that into perspective, I write this at a time when COVID-2019 has caused 14,000 deaths: and while this is a number that will grow exponentially and is an important pandemic rightly gaining significant attention, it is worth considering that in the past fortnight alone, malaria has killed the same number of people. While we focus our efforts on a new infectious disease, it’s paramount that other major killers aren’t ignored. Historically, resource diversion from investment in new pandemics has had significant consequences – such as the measles epidemic that killed 6,000 children in the Democratic Republic of Congo in 2019, when the bulk of healthcare funding was focused on combating Ebola.

Malaria is a regressive disease – that is, one that affects the poorest people in the world the most. In this era of global connectedness, it is important that we realize that we all have a role to play in ensuring this completely preventable and treatable disease is tackled in our generation, as malaria traps entire nations in poverty through its impact on growth, development, morbidity, and mortality. 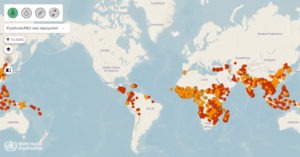 Malaria in humans is caused by a protozoan parasite of the genus Plasmodium, and includes the species Plasmodium falciparum, P. vivax, P. ovale, or P. malariae. Plasmodium knowlesi (thought to be previously only capable of infecting monkeys) has also recently been documented causing death in humans in South East Asia. The parasite is transmitted either via the Anopheles mosquito or from a mother to an infant via the placenta.

Every febrile or anaemic child returning from a malaria-endemic region within the past 12 months should always be investigated for malaria, regardless of whether they have previously lived in a there (and presume themselves to be ‘immune’) or took chemoprophylaxis.

Malaria presents with an influenza-like syndrome, with malaise, headache, myalgia, nausea, and rigors (which may occur intermittently, and correspond to the rupture of schizonts in the erythrocytic stage of the parasite’s lifecycle).

It is important to distinguish uncomplicated malaria from severe malaria, as their treatment (and risk of morbidity and mortality) differs significantly. Severe malaria was previously considered only to occur secondary to P. falciparum, although there are increasing case reports of patients with P. vivax or P. knowlesi malaria presenting severely ill.

The definition of severe malaria is the presence of one or more of the following clinical or laboratory features: 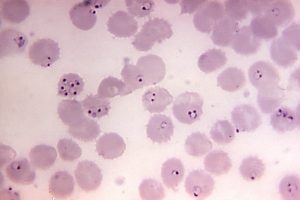 The biggest challenges in diagnosing malaria are:-

(i) thinking to test for it – as if you’re seeing a patient in a health setting like Australia or the UK where malaria is not endemic, you may well not think of it unless you’ve specifically asked for the exposure history

(ii) falsely diagnosing malaria infection as the sole cause of a child’s illness in an endemic region. The latter is a common reason that bacteraemia and other causes of meningitis are missed in regions of the world where malaria is prevalent. Many children in these settings may have a low-level parasitaemia persistently present that may not be the cause of their clinical illness, and important empiric antimicrobials or further investigations are missed.

Unfortunately, there is no one diagnostic test that can distinguish between parasitaemia causing clinical malaria, and a febrile illness due to another cause in a patient who also has asymptomatic parasitaemia.

Until recently, clinical diagnosis was the prime method of diagnosing malaria. That is, a child presenting with a constellation of symptoms predictive of malaria in a malaria-endemic region was presumptively considered to have malaria. However, to improve diagnostic accuracy and prevent the promotion of artemisinin resistance by ensuring the rational use of anti-malarial medications, parasitological diagnosis is now essential.

The gold standard diagnosis remains microscopy, if staff and facilities are available to perform this. A thick blood film allows the presence and density (percentage of parasitized erythrocytes) to be confirmed, while the thin film determines the Plasmodium species. The sensitivity and specificity of these tests are laboratory-dependant, and relies on astute scientists being familiar with the laboratory diagnosis of malaria.

Rapid diagnostic tests (RDTs) (lateral flow immunochromatographic tests, often reported as an ‘ICT’ result) are an alternative way of quickly establishing the presence of malaria. They work by detecting specific malaria antigens within 15 minutes on a card that resembles a pregnancy test. However, RDTs are less sensitive at detecting low numbers of parasitaemia (an important prognostic factor) and are also insensitive at detecting most species aside from P. falciparum. RDTs can also mislead a clinician in their diagnosis, as parasitaemia in a child living in a malaria-endemic region may not necessarily reflect infection, and other diagnoses (such as sepsis) are often missed if the diagnosis is assumed to just be malaria secondary to a positive RDT. 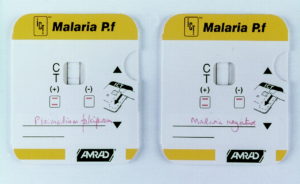 Why do some guidelines tell me I need to do three separate tests?

A single negative blood film, or negative antigen test, does not completely exclude the diagnosis of malaria due to the imperfect nature of these tests. Simultaneously, parasitaemia may be low, or antibiotics being taken for other reasons may have enough antimalarial activity to modify or suppress malaria symptoms and parasite load (this is particularly common with trimethoprim-sulfamethoxazole, tetracyclines and quinolones). A number of organizations, therefore, recommend repeating blood films with fever spikes (to correlate with schizont rupture) until a positive test is returned, or until 3 negative films are confirmed, in patients with a high pre-test probability. This is not necessary for patients in whom the diagnosis of malaria is unlikely.

Importantly, peripheral films will not identify parasites which have sequestered (such as into the placenta in malaria in pregnancy, or deep into the capillary system of the brain in severe malaria), so bear in mind that the peripheral blood smear may reflect a low parasite density relative to the true parasite burden. P falciparum, P. malariae and P. knowlesi infect mature erythrocytes so tend to exhibit higher parasite densities; while P. vivax and P. ovale infect only young erythrocytes, so the parasite density for these species tends to be lower.

Once a diagnosis of uncomplicated or severe malaria has been made and treatment commenced, serial blood smears need to be examined to monitor the parasitological response and ensure resolution of infection. If resources allow, this is usually performed daily until negative (or until day 7 if well enough for discharge prior to complete parasitaemia clearance). In severe malaria, parasite density tends to be monitored more frequently (every 12 hours during the first 2-3 days). The mean time for parasite density clearance is 48-72 hours, although prolonged clearance times may occur in malaria acquired in SE Asia.

Uncomplicated malaria can be treated orally, provided the child can tolerate oral therapy. An artemesin-based combination therapy (artemether+lumefantrine, known by the tradename ‘Coartem’) is the treatment of choice for uncomplicated malaria, with additional considerations:

For the treatment of severe malaria, start parenteral therapy as soon as possible. Alongside managing the ABCDEFGs (particularly focusing on careful correction of fluid and glucose levels), commence parenteral Artesunate as soon as possible. For travelers from regions of Asia where resistance may be present (Thailand, Vietnam, Cambodia, Laos or Myanmar), combination therapy with IV artesunate + IV quinine is recommended (commencing each drug as quickly as they are available).

Adjunctive therapy with ceftriaxone and paracetamol is recommended, as bacteraemia is a common co-occurrence in severe malaria, and paracetamol can reduce the risk of haemolytic acute kidney injury.  Patients can switch from IV to oral treatment (with Coartem) once they have clinically improved and can tolerate oral therapy. Ideally, a FBC should be performed weekly for 4 weeks after completion of therapy to monitor for delayed haemolysis or the recrudescence of malaria parasites.

Dhiman, S. Are malaria elimination efforts on the right track? An analysis of gains achieved and challenges ahead. Infectious Diseases of Poverty; 2019; 8(14).