As paediatric emergency clinicians, a large part of our job is identifying the child with a serious infection. The utility of blood tests in helping with diagnosis in this group of children is debatable. Could point-of-care CRP testing help identify children with serious infection?

This study aimed to develop a tool which includes PoC CRP testing to help identify children with serious infection.

The objectives of the study were clearly laid out – to use point-of-care (PoC) C reactive protein (CRP) testing to improve the assessment of children presenting to hospital. However, the actual objective was including CRP as part of an algorithm including clinical features and vital signs. This should be made clearer in the title.

Eligible patients were between 1 month and 16 years of age, presenting to six EDs and six urgent assessment units with an acute illness in Belgium over a one year period.

Patients were excluded if the acute illness was due to trauma, mental health problems, a chronic condition, a neurological condition, or if they were referred by their GP.

From an initial 8962 patients assessed for eligibility, after exclusions there were 5517 illness episodes (2895 presenting to an urgent care clinic, and 2622 presenting to the emergency department) 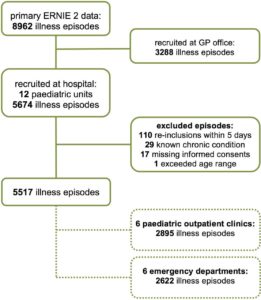 The study design was suitable for the objective and looked at a group of patients common to our practice. It seems like an appropriate patient group to use, although I am not clear of the reason behind excluding patients who were referred by the GP. Perhaps this puts the child in a category of higher suspicion for serious infection (SI)? A sample size estimation was calculated.

Patients were assessed for 61 different clinical features – these features are broken down into a few main categories – demographics, history taking, observation, clinical examination, and diagnosis/management. Patients were also asked whether the current illness was different from previous illness; and were asked if the fever resolved with anti-pyretics. They then had a PoC CRP.

These 61 measurements appear valid and include all the things you would ask parents when taking a history from an unwell child. Many are subjective (particularly the examination ones) and so will be clinician-dependent – for example ‘pale’ or ‘skin turgor‘. Additionally, I’m not clear about the significance of asking if the fever has resolved with anti-pyretics.

This seems like a sensible primary outcome. It is worth considering the impact of including cellulitis in this group. We know that these children do have a high CRP, and their diagnosis should be obvious on initial assessment. Including them has the potential to positively skew the results (although there were only 3 children in this category out of 272). 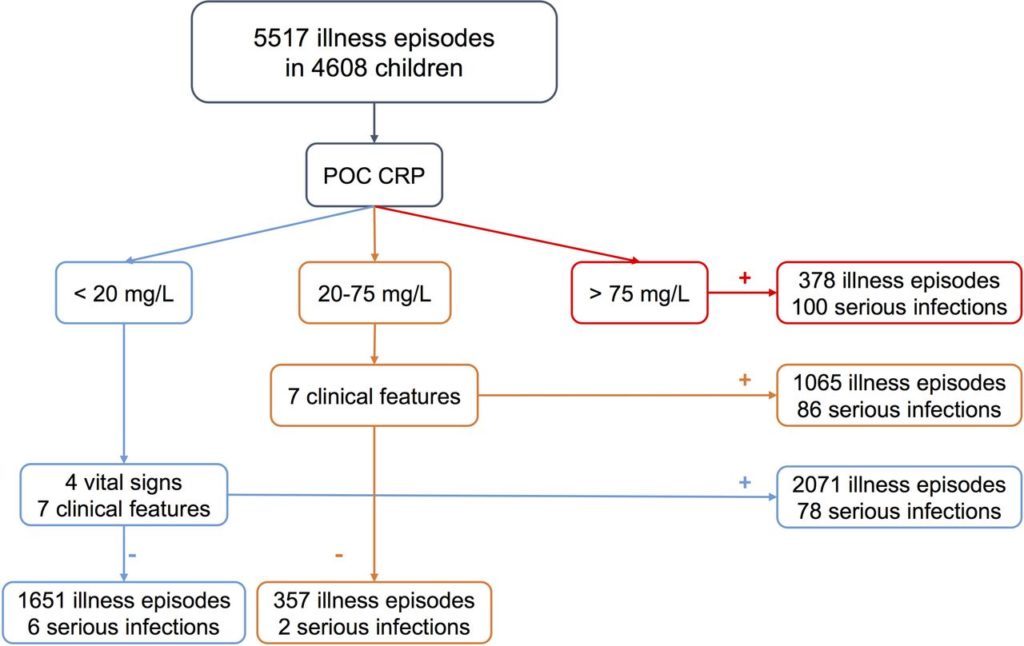 The algorithm classified 36.4% of the population as low risk. 8 children with SI were misclassified as low risk (CRPs from <5 to 31mg/L).

The data is adequately described and the numbers all add up consistently. The results are presented clearly allowing the reader to make their own judgement. The data are suitable for analysis and the methods used are appropriate.

The results are discussed with the authors first considering the validity of CRP on its own. They establish that low CRP levels alone cannot rule out SI, Approximately one third of patients with SI had CRP >75 (37%); one third had CRP 20-75 (32%); and one third had CRP <20 (31%). Using CRP<20 to rule out SI would have missed six cases of SI.

The authors suggest using CRP in the algorithm was more successful (although this misclassified eight patients with SI as low risk). The suggest for use of this tool is as a triage tool – where children with a CRP>75 should be assessed by a senior clinician, whereas the others can be assessed by  a junior doctor.

Will I change my practice?

In my early years as a paediatric trainee, I used to use CRP and FBC to reassure myself about ruling out SBI – similarly if the result was high then I would be more worried. As my understanding of the statistical relevance of these tests has improved, along with my experience and clinical skills, I no longer use this as a test to inform my suspicion of SBI.

Even if there was a clear cut-off known to advise us when a CRP is ‘too high’, in a population where we have such a low prevalence of disease, a positive result is difficult to interpret anyway.

In this paper we see that when using >80mg/L as a cutoff, the specificity is 95%. In a population of 100 unwell children therefore, five would have a positive result even though they had no SBI. Also in this population of 100 febrile children, with a prevalence of 5% of SI, five children will have an SI. Best case scenario is that all five children with an SI have a positive CRP (>80mg/L) – although we know that in reality they won’t.

So best case scenario in this population is that we have 10 patients with a CRP >80mg/kg and only five of them have SI. We are left with a 50:50 chance. And conversely with a low pre-test probability, a negative test doesn’t really add anything either.

Overall, I’m not clear what a CRP adds in addition to our regular clinical assessment, and the NICE traffic light system. Consequently the authors have had to conclude with an algorithm that is used only as a triage tool to decide which type of doctor assesses the child. This algorithm may be useful in some units if it is validated more broadly, but the title gives a misleading statement about what CRP can contribute to the diagnostic conversation.