Home > View All > ADC/DFTB Journal Club #2 – December – How well do we manage suspected meningitis in ED?

ADC/DFTB Journal Club #2 – December – How well do we manage suspected meningitis in ED?

Vaccines have been instrumental in reducing rates of bacterial meningitis. However bacterial meningitis still represents 4-19% (1) of cases of meningitis and has been estimated to be cause 2% of all child deaths (2). Timely administration of antibiotics helps save lives with adult research suggesting that every hour of delayed treatment increases the risk of death or permanent disability by 10-30% (3). So how swiftly do we investigate and treat children with suspected meningitis? The paper from Archives of Disease of Childhood featured in our second #DFTB_JC sought to answer this question:

This was a prospective cohort study of 388 children who attended three UK paediatric tertiary centres between 2011-2. They had been either hospitalised with suspected meningitis or underwent lumbar puncture (LP) during sepsis evaluation.

Of the 388 children, 18% (70) were given a diagnosis of meningitis but only 13 were documented as bacterial and 26 as viral with and 31 patients having no known or identified cause. Just over half the children (57%) had seen a doctor in the same illness prior to ED presentation.

The median time from initial hospital assessment to antibiotic administration was 3.1 hours.  The time to LP was even longer at 4.8 hours, but once discounting intentional postponement for reasons including convulsions, concern regarding raised intracranial pressure, coagulopathy or shock, this time reduced to 3 hours. Over half of the children (62%) had their LP following antibiotics.

In further discussion with the corresponding author @manishs_  the mean was chosen due to skewing of the data and the time from initial hospital assessment was equivalent to arrival in ED. The time between initial assessment and LP ranged from 0-183 hours whilst the time between initial assessment and antibiotics ranged from 0 to 136 hours. For the 221 patients who they had data in hours available; only 31 received antibiotics in the first hour. However 131 of the 221 patients did receive antibiotics in the first 4 hours.

The general sentiment from the twitter discussion was  that the median time of 3.1hours to antibiotic administration was longer than expected, and suboptimal. Whilst the actual time point may have been somewhat surprising; many could identify common reasons for antibiotic delay and in particular, discussion about the difficulties that lumbar puncture can pose in different age groups and its contribution towards delay of antibiotics.

“It surprised me. Think we generally give abx before LP in children and LP before abx in babies… probably because of less anxiety around the procedure in babies. But no excuse for 3 hour delay in any age group really.” – @DrRoseM

We then delved deeper into the importance of LP before or after antibiotics and factors affecting unintentional LP delay. Paediatrician from Ontario, Tom Lacroix shared concern that with improved vaccines, he has seen skill attrition.

“…I wonder how much of delay is bc we have become unaccustomed to doing LPs. I have seen a fall in LPs 90%+ since intro of pneumococcal conjugate vaccine” – @drtom_lacroix

Across in the UK, the perceived anxiety surrounding performing an LP in older children was raised including staffing challenges, concerns about pain and procedural sedation.

“In neonates we rush to get the LP done within an hour, but in older children it always seems to take a lot longer. Do we have misplaced anxiety in this age group?” – @TessaRDavis

“…It takes one NICU nurse to flex a 6 day old up for an LP, but a play specialist, at least two nurses and one parent to get an older child in position for an LP” – @edd_broad

Differences in practice in terms of performing a FBC and Coags screen prior to LP were also highlighted.

“Not sure about mandatory, but I’ve been taught (and continue to practice) confirming PLT > 50×10^9/L prior to LP. #DFTB_JC” – @henrygoldstein

“…Unless evidence of coagulopathy ie purpura. Do LP and then give abx” – @DocAnthonyT

In the supplementary tables from the paper, of all children in the study, just under a quarter (24.7%) had bacterial and/or viral CSF PCR performed. Of the 70 children who had meningitis, CSF PCR was performed on only 9 (13%). The rate was slightly higher for meningitis of cause unknown (6 of 29 patients, 21%). The authors commented that this represents a significant underutilisation, particularly as CSF PCR is recommended in the current UK guidelines. The suspected cause of this was a long turnaround time to PCR.

However the benefits of positive viral CSF PCR results would include reducing length of treatment and inpatient stay as well as building a more accurate understanding of true disease rates.

The results of this paper contrast with experiences of our journal club participants where CSF PCR appeared to be a more common order, particularly in the neonatal setting:

“Might depend on the CSF WCC for the bacterial PCR? If zero, I wouldn’t necessarily send bacterial PCR (but will still frequently send viral PCR)…Parechovirus PCR is automatically sent for our neonates. #DFTB_JC ” – @DrSarahMcNab

“NICU where I work send viral PCRs as standard with turnaround in 24 hours. Think you still need to request in paeds. #dftb_jc” – @DavidKing83 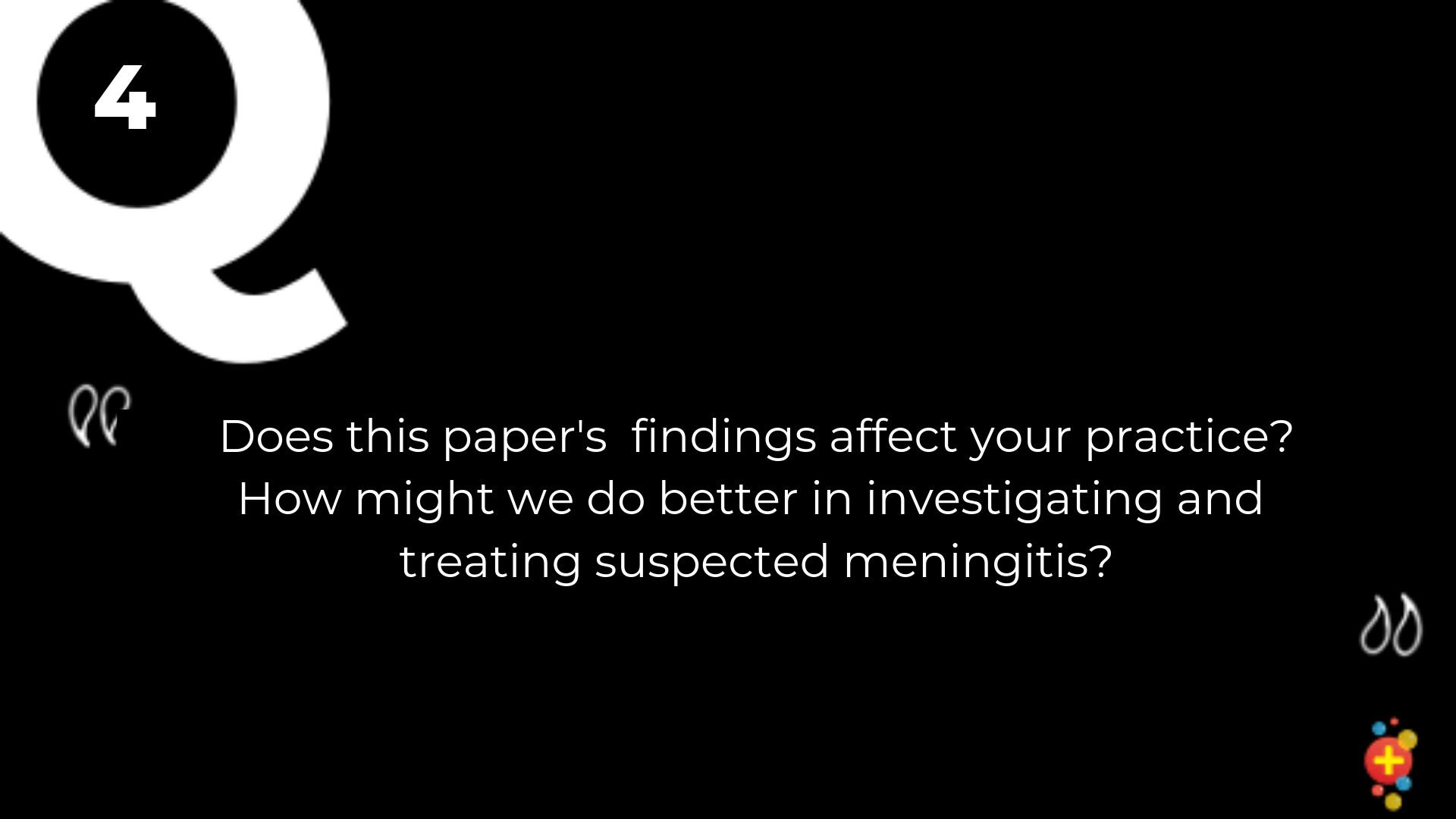 Paediatric Registrar Rose provided a good summary of what she learned from the article and the #DFTB_JC chat:

“#DFTB_JC take home- give the abx as soon as possible and definitely within 1 hour. If unable to do LP pre abx due to delays etc then do LP ASAP after abx. Consider PCR as a valuable tool to aid decision re duration of treatment” – @DrRoseM

From the DFTB team, the discussion has made us rethink how each step in assessment and management of suspected meningitis may delay optimal care. In particular we’ll be thinking about how strong the evidence is behind ‘the golden hour’ of antibiotic administration, the anxiety surrounding LPs in older children and evidence behind performing coagulation studies prior to LP…now that sounds like a potential post for the future.

Thanks again to everyone who participated in our #DFTB_JC and we hope you will join us again later this month for our next paper.

Please join us for our next ADC/DFTB Journal Club on twitter at Tue 22/1/19 at UTC2000hrs (That’s Wednesday 0700 23/1 AEST) January’s featured FREE access article from @ADC_BMJ featuring a FREE access article from the latest issues of Archives of Disease of Childhood. January’s pick  is ‘ Can we use POCUS to Diagnose Pneumonia?’ Read the article here: bit.ly/2TMDf2M The chat will happen on twitter, hosted by @DFTB_Bubbles. Remember to use the hashtag #DFTB_JC for all related posts.