There is an unwritten rule amongst the team at DFTB – equity and equality for all. As conference organizers we have always been proud to have equal gender representation throughout our events – both in terms of keynote speakers and sessional speakers. We took a look at the data to see how common this was in the field of paediatrics. You can see that report here.

We have then broadened our scope to look at the wider role of gender in paediatrics and have had the following opinion piece published in the Archives of Diseases in Childhood.

First of all we wanted to confirm our pre-held belief that a large proportion of paediatric trainees are women. By looking at the data from the US, UK, and Australia it is apparent that two-thirds to three-quarters of paediatric trainees identify as female. It is also one of the specialities that has the highest proportion of less than full time trainees. With trainees taking career breaks to have children, there needs to be a clear plan for return to practice. Focus groups cite potential diminishment in clinical ability coupled with a drop off in knowledge as an area for concern. It would be nice to think that there is a clear framework for return to practice but this is rarely the case despite published guidelines being available.

“The greatest harm women do themselves is to accept the premise that childcare and less than full-time working are women’s issues. And until the attitudes of many men mature, and sadly many women too, ambitious women must learn to be thick skinned. It’s still all too common to be called bossy, aggressive, scary or worse, for actions that in a man are regarded as masterful, authoritative and decisive. It’s also commonplace to be sidelined, ignored or patronised. And you must be prepared to lose and try to see this not as a personal failing, but as the luck of the draw.”

Mentoring is not coaching. Being a mentor is like being a guide not a sherpa. They are there to show the way, but they do not carry the heavy load. They can point out what they have done and act as a sounding board. They can use their worked and lived experience to make life better for those to come. There is a great opportunity for those of us who have made it up the ladder to mentor those who are only just setting foot on the road. At FIX17 Charlotte Alexander and Jessica Ng spoke passionately about the role of the mentee and what being on the receiving end of the relationship has been like for them. Sometimes we may be inclined to think ‘what’s in it for me?’ but accounts like theirs can help us understand the power of the mentor/mentee relationship.

And a parallel role that women (and men) in leadership can play, is the role of sponsor. What is a sponsor? It’s about amplifying the work of others, it’s about stepping aside and letting equally qualified female colleagues take the reins on a project without thinking because you know they will do an awesome job. It’s when you are asked to do a talk and you say you can’t but I can give you the name of three women who would be perfect for the task in hand. That is sponsorship.

“The medical careers literature emphasises the importance of role models, especially for women, and I think finding a mentor or being part of a group of like-minded female doctors, can be very enabling and supportive for women.”

Gender and make up of Boards

Industry is abound with data that shows that a diverse and inclusive board performs much better when it comes to strategic decisions than one made up of eight cookie cutter members sitting around a polished table. Despite the fact that 50% of paediatric consultants are women it is disappointing that the majority of college boards are male. The problem is not exclusive to paediatrics however with the current board of the Australasian College for Emergency Medicine being entirely made up of men. 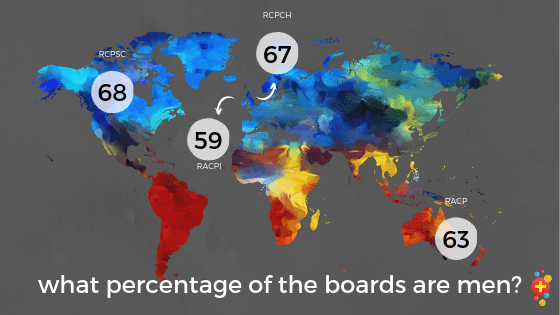 “The biggest issue I have had during my career is the juggle of children and the guilt of working long hours. Of course, this impacts both males and females – although I suspect we women carry more guilt about it.”

Just keeping our fingers crossed and hoping that things will change eventually does nobody any favours.  Setting quotas is not what is needed but allowing all appropriate candidates are considered from the outset would help. ACEM, recognising their lack of diversity, is seeking to change its constitution in order to increase the opportunities for female fellows. As with any core change it does actually require that members get off their bottoms and vote.

Gender and speakers at conferences

When we looked at the data to see what the state of affairs was in the conference space we were not surprised. Keynote speakers the major paediatric conferences were predominantly male (66%) with only 42% of breakout sessions being given by women. Some conferences try and break the muold with this year’s SMACC making an active decision to increase diversity on the stage. Other (non-paediatric) conferences go the other way and provide an amazing showcase of female/gender-diverse talent. At DFTB gender diversity has always been at the forefront of our minds when it comes to scheduling. Hence, it should come as no surprise to anyone that DFTB18 opened with a trio of amazing speakers – Mariam Issa, Margie Danchin and Michelle Johnston.

We can put an end to the manels that cannot be a statistical fluke. At least one of the authors of the paper has stood aside when a session he was involved in at a national conference had only one female speaker. This shouldn’t have to be the case. Speakers Bureaus, like the one provided by FemInEM, are full of great speakers and one only has to ask to get the recommendation of speakers in any field that are equally, if not more worthy, than their male counterparts.

A number of conferences now utilise speaker coaches to deal with some of the years of encrusted imposter syndrome brought about by fusty institution level bias towards male speakers. We know that women are not introduced properly in the same terms as their XY colleagues. A simple written rule can stop this happening. We know that women are called on to ask questions less often, something, again, that is easy to fix.

“I would regularly look around at a conference and find myself being the only female speaker. I sometimes feel I am at a disadvantage because I don’t have someone from my institution smoothing the way for me to get speaker invitations, moderator positions, leadership on committees… ”

Gender and authorship of paediatric papers

Women are under-represented in academic medicine as a whole. With so much of academic advancement still relying on the ‘publish or perish‘ mantra it is good to see that female first authorship as steadily grown over the years. Peer mentorship is one way forward as is some of the high impact journals taking leadership in this space. 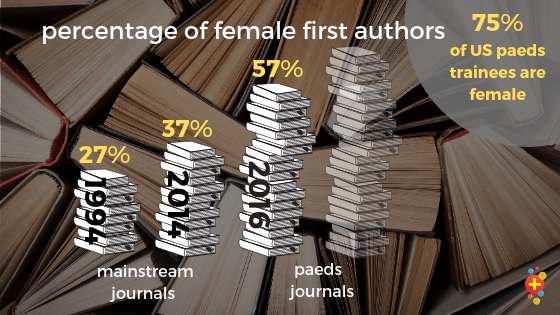 “There will likely be a (very strong and prevalent) perception that setting gender equity targets means shoe-horning in female candidates who are of poorer quality than the male candidates who otherwise would have taken that spot. This perception is fed by our gender biases and not only makes the bar higher for women but lowers the bar for men. ”

*The header image is a painting of the amazing Grace Darling. She was the daughter of a lighthouse keeper who braved the stormy seas to rescue the crew of the Forfarshire in 1938. It’s amazing what you remember from primary school.

For those of you who like your infographics, here is a summary of some of our key points from the article and our look into conference speakers: