Home > View All > Warts and all

Victor, 11, presents to the ‘minors’ area of your emergency department with a painful wart on his foot. It has been increasing in size over the last three months and is now so sore he can’t walk on it without a limp. His GP suggested trying duct tape, but Victor’s parents were skeptical about this. They’ve sought the advice of a local pharmacist, who sold them some salicylic acid cream.

He takes off his sock to reveal this: 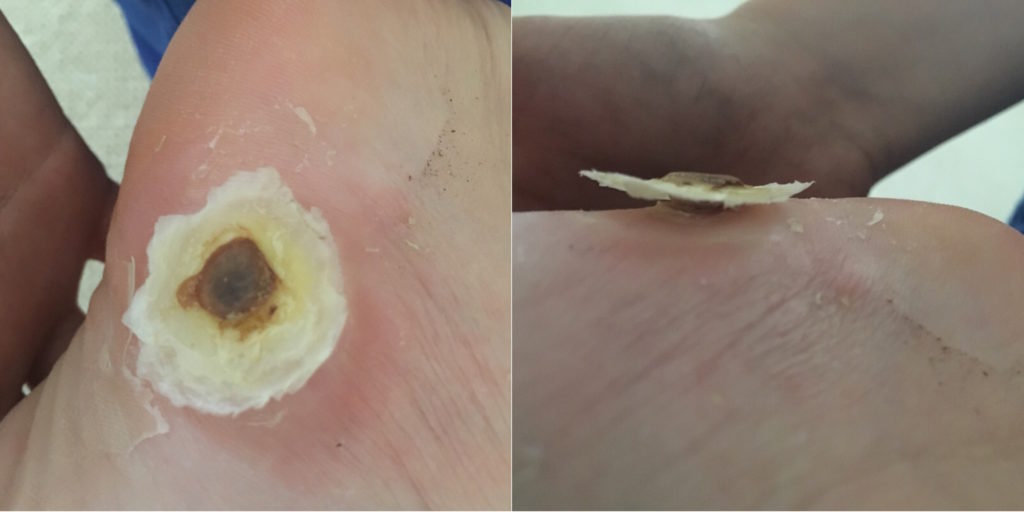 What’s going on in these pictures?

The darker area is the wart, the circumferential discoid scale is lifted healthy skin as a result of either the salicylic acid or Upton’s paste damaging the normal skin around the wart.

Okay, so back to basics, what is a wart?

A wart is a non-cancerous squamoproliferative growth of the skin. Warts occurring on the feet are known as verrucae. They are caused by Human Papilloma Virus (HPV) and typically regress spontaneously in 6 months (25%) to two years (70%). Bruggink & colleagues found that one-half of primary schoolchildren with warts will be free of warts within 1 year, with younger age and non-Caucasian skin type increasing the likelihood of resolution.

Can we make them disappear any faster?

The short answer is … maybe. In addition to watchful waiting, the choices are essentially forms of either chemical trauma or physical trauma.
Popular chemical options include gently filing the wart’s apex with emery board or similar and applying a substance to increase cell turnover. Commonly, these include various strengths of salicylic acid paste or Upton’s paste APF (60% Salicylic acid with 10% trichloroacetic acid). Comparatively, cryotherapy, curettage or electro-dissection are also modalities that have been used to remove warts.

What is evidence for management?

A 2012 Cochrane review looked at topical treatments for warts. In the 85 studies and more than 8000 patients, they did not identify any RCTs evaluating surgery (curettage, excision), formaldehyde, podophyllotoxin, cantharidin, diphencyprone, or squaric acid dibutylester. However, a number of RCTs looked at salicylic acid, duct tape and cryotherapy (with liquid nitrogen).

A number of trials compare salicylic acid to cryotherapy – one head to head trial of liquid nitrogen vs salicylic acid (the EVerT study), enrolled 240 patients, albeit mostly in their early 20s. The study showed no difference in wart resolution, no difference in side effect profile, although patient satisfaction was initially higher with salicylic acid. Notably, there was a drop in compliance and satisfaction by week 3 of a planned 8 week course for the salicylic acid arm. Authors observed a markedly lower cure rate (15%!) than previous studies, which claimed that between one and two thirds of warts resolved!

Of note, for cryotherapy in children, there is the added challenge of keeping the child still and not so fearful that the procedure fails. Comparatively, daily dressings with salicylic acid and Vaseline provide an alternative set of challenges. There was a wide variety of regimens used for each of the therapies studied.

Craw et al suggest that cryotherapy and salicylic acid may be used as first line, although in children salicylic acid is preferable. For the other therapies mentioned above (surgery, curettage et al.), they advised that they are for second line use only.

Victor agrees to sit still long enough – with the help of some nitrous oxide – for his wart to be removed and the base cauterised with silver nitrate (it demonstrated possible benefit in the 2012 Cochrane review). The wound is dressed and advice for some ongoing salicylic acid therapy in addition to regular dressing changes provided. 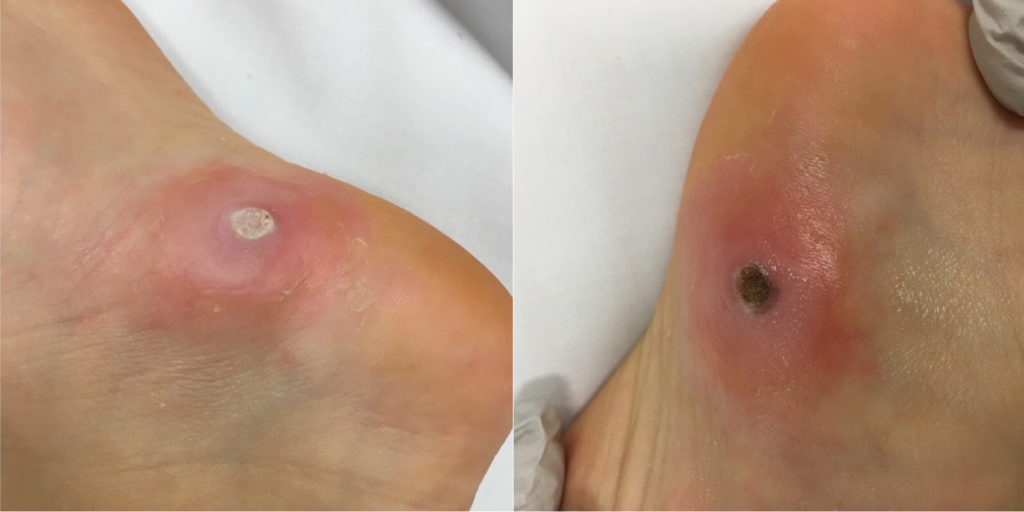 Just as he gets up to leave, Victor asks about the duct tape – his friend tried it and it seemed to work.

Duct tape has been studied in three trials (193 patients); the mode of action is not well known, but at least one author has suggested a psychological component that is more effective in children than adults. It is popular as it is relatively harmless, although no better than placebo.

In summary, the evidence around management of warts is evolving and heterogeneous. Most will resolve unassisted, but the currently recommended first line therapies with either salicylic acid paste, cryotherapy or duct tape have all had some success in at least one trial, if the parents (and child) are keen to try an active intervention and can appropriately weigh up the potential harm or inconvenience vs the low likelihood of benefit.

(Many thanks to “Victor” and his family for consenting to these photographs being in the public domain.)

Craw, L., Wingert A. & Lara-Corrales, I. Are salicylic formulations, liquid nitrogen or duct tape more effective than placebo for the treatment of warts in paediatric patients who present to ambulatory clinics?  Paediatr Child Health Vol 19 No 3 March 2014

2 thoughts on “Warts and all”