An 8 yr old boy presents after three vomits at home.  He has a background of spastic diplegic cerebral palsy and has a ventriculo-peritoneal (VP) shunt.  He is usually ambulatory and attends a mainstream school.

What goes wrong with VP shunts? How can we assess them for failure or infection?

What is a VP shunt?

Ventriculoperitoneal shunts are the most commonly used method of diverting CSF flow for the treatment of hydrocephalus from any cause. The shunt system consists of a proximal catheter that sits in the lateral ventricle, a one-way valve to prevent the backflow of CSF, and a distal catheter that sits in the peritoneal cavity. Programmable valves are available where the rate of CSF flow can be adjusted with a magnet. Shunts can alternatively drain into the atria or pleural space but these are much less common. They do not correct the underlying problem but do prevent complications of raised intracranial pressure when there is an obstruction to the flow of CSF. 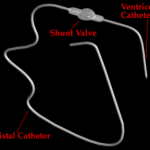 What complications can VP shunts develop?

VP shunts are prone to failure and infection. Failure may result from mechanical obstruction, over-drainage, or loculation of the ventricular system. Abdominal problems such as bowel perforation can occur and rarely shunts have been known to migrate to the bladder or scrotal sac.

How can I tell if this child’s shunt is infected?

Infections are much more common in recently sited shunts, with 90% of infections occurring in the first six months post-insertion. Symptoms such as erythema along the shunt tract, meningism, or peritonism strongly suggest that the shunt is infected but are rarely present. Fever is usual but not universal, while lethargy, headache, and irritability are common. If these factors, in the context of the child’s other symptoms and exam findings, leave you suspicious of an infected shunt a neurosurgeon should tap it. The most frequently identified bugs are Staph. epidermidis and Staph. aureus, which can generate biofilms making antibiotic treatment very difficult.

How can I tell if this child’s shunt is failing?

Clinical features of shunt failure are those of raised intracranial pressure. Persistent headache, lethargy, vomiting, changes in the neurological exam, or visual function may all be identified. A plain X-ray shunt series includes views of the skull, neck, thorax, and abdomen allowing the integrity of the shunt system to be assessed. the shunt series is rarely helpful but indicated of you are considering a fractured shunt in the differential. A non-contrast CT may identify migration of the proximal tip of the intra-ventricular catheter or secondary features of increased ICP such as ventriculomegaly. CTs are most useful when compared with previous scans but remember you can have raised ICP and a normal CT. It is also worth considering the total radiation dose received by kids with shunts when CT is used liberally.

How will I recognize over drainage?

Symptoms (usually headaches) that are exaggerated by sitting/standing and improved with lying down. Occasionally the drainage can be so rapid it can lead to tearing of the bridging veins of the dura and a subdural haematoma. 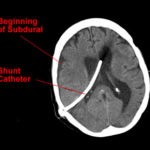 On further assessment, this child was afebrile, reported two episodes of diarrhoea, and revealed that his sister was suffering similar symptoms. It was 2 years since his most recent shunt revision, he denied having a headache and his neurological examination was consistent with that previously recorded in the chart. He was given ondansetron and, after successfully completing a trial of oral fluid, was discharged.

The same patient returned 2 hours later having sustained a minor head injury. He was GCS 15 and met the PECARN low-risk criteria. The medical student had read the sub-group analysis of the PECARN data, which showed similar rates of clinically important traumatic brain injuries after minor blunt head trauma in children with and without VP shunts. The consultant reviewed this data and was happy to apply the PECARN rule to this patient and discharged him with appropriate head injury advice and without a CT.