A 14-month-old boy is brought to your GP clinic by his mother with recurrent upper respiratory tract infections. His mother reports that he attends full time day care and he is ‘constantly sick.’ You note that one of your colleagues has seen him twice for acute otitis media this year.

What happens to serum immunoglobulin levels during gestation and in early life?

IgG levels of maternal origin in the fetal circulation increase over the course of pregnancy. At the end of gestation, fetal IgG levels exceed those in the maternal circulation, which indicates that the placenta develops an active transport mechanism for IgG molecules (1). 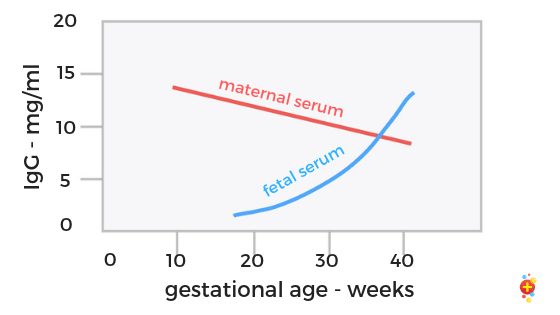 Evolution of maternal and serum IgG levels during pregnancy.

Maternal immunoglobulin G (IgG) is transported across the placenta, mainly in the third trimester. Because of this, babies born prematurely have less IgG.

Immunoglobulin levels by age (from 3)

What are the clinical features of transient hypogammaglobulinaemia of infancy (THI)?

The usual clinical features include:

Typically, children have a combination of the above features.

Other less common or rare clinical features include:

How is transient hypogammaglobulinaemia of infancy defined and diagnosed?

There are differing definitions of THI in the literature but the following criteria is widely accepted:

THI can only truly be diagnosed retrospectively when age-adjusted immunoglobulin levels and specific antibody formation (function) have become normal, usually by age 4 years. There are no specific markers or a genetic signature.

Note, in a normal population, 2.5% of individuals will fall below that value, and clinicians may encounter otherwise well children with low immunoglobulin levels and normal antibody responses to vaccine antigens with no increased susceptibility to infection.

Diagnosis of putative THI is based on clinical picture and investigations. Most infants with THI have a normal physical examination with none of the classic findings present in other primary immunodeficiency diseases, although the tonsils and lymph nodes may be small.

THI is seen in two cohorts of patients:

How common is transient hypogammaglobulinaemia of infancy?

There is a male predominance (2:1), and approximately 60% of patients are diagnosed by age 1 and the remaining 40% thereafter. Male predominance may be a genuine finding or may suggest that the normal values we use for evaluation should reflect not only age but also sex.

What investigations should be ordered?

B and T lymphocyte subsets

What is the differential diagnosis of transient hypogammaglobulinaemia of infancy?

THI should be distinguished from other permanent forms of hypogammaglobulinemia such as CVID or X-linked agammaglobulinaemia (XLA).

What is the pathogenesis of transient hypogammaglobulinaemia of infancy?

The pathogenesis is unknown but proposed causes for THI include: (1) suppressive maternal antibodies (IgG) which cross the placenta and suppress foetal immunoglobulin production; (2) genetic variation in certain families with a propensity to immunodeficiency; 3) abnormal T-lymphocytes that fail to stimulate antibody production by B-cells; 4) unbalanced cytokine production; (5) abnormal or immature B-cells, not unlike patients CVID (7).

What is the treatment of transient hypogammaglobulinemia of infancy?

For asymptomatic patients, counselling is the main treatment required. Immunoglobulins should be repeated approximately every 6 months to ensure they normalise.

For children with clinically significant THI, the main objective is the prevention and treatment of infection. Judicious reduction of exposure to infection, and prompt and appropriate treatment of respiratory infections is warranted.

Antimicrobial prophylaxis during the respiratory infection season may be prescribed if recurrent respiratory and ear infections occur. Bactrim (5 mg/kg of the trimethoprim component) or amoxicillin (40 mg/kg) are suggested options.

Immunoglobulin replacement is reserved for rare instances of recurrent, severe infections only.

Immunisations should be given as per the schedule.

What is the prognosis of transient hypogammaglobulinemia of infancy?

Most children with THI develop normalise IgG levels by age 4 but many normalise before this and some children’s IgG levels do not normalise until adolescence.

Most suffer from increased episodes of otitis media and upper and lower respiratory infections.

1 thought on “Transient hypogammaglobulinaemia of infancy”