It’s the one question that all parents seem to ask about their newborn – “Is this normal? How can such a small thing create such a lot of mess?” One of the things that stood out to me from Ross Fisher’s presentation on “What every Paediatric Surgeon wished you knew” was the line “There is no such thing as a normal bowel habit“. In an effort to avoid changing yet another nappy (diaper to some of you) I thought I would take a closer look.

As the fetus matures in utero, surrounded by amniotic fluid, it ingests anything that is floating alongside it, like a child in a poorly kept public swimming pool. Along with amniotic fluid and bile, mucus, lanugo and epithelial cells are swallowed down and retained until after birth (usually).  This doesn’t usually start to happen until about the 26th week of gestation. Initial bacterial colonization of the neonatal gut was thought to occur as a result of contamination from the mother at this time but some studies have revealed the presence of bacteria in seemingly sterile meconium. 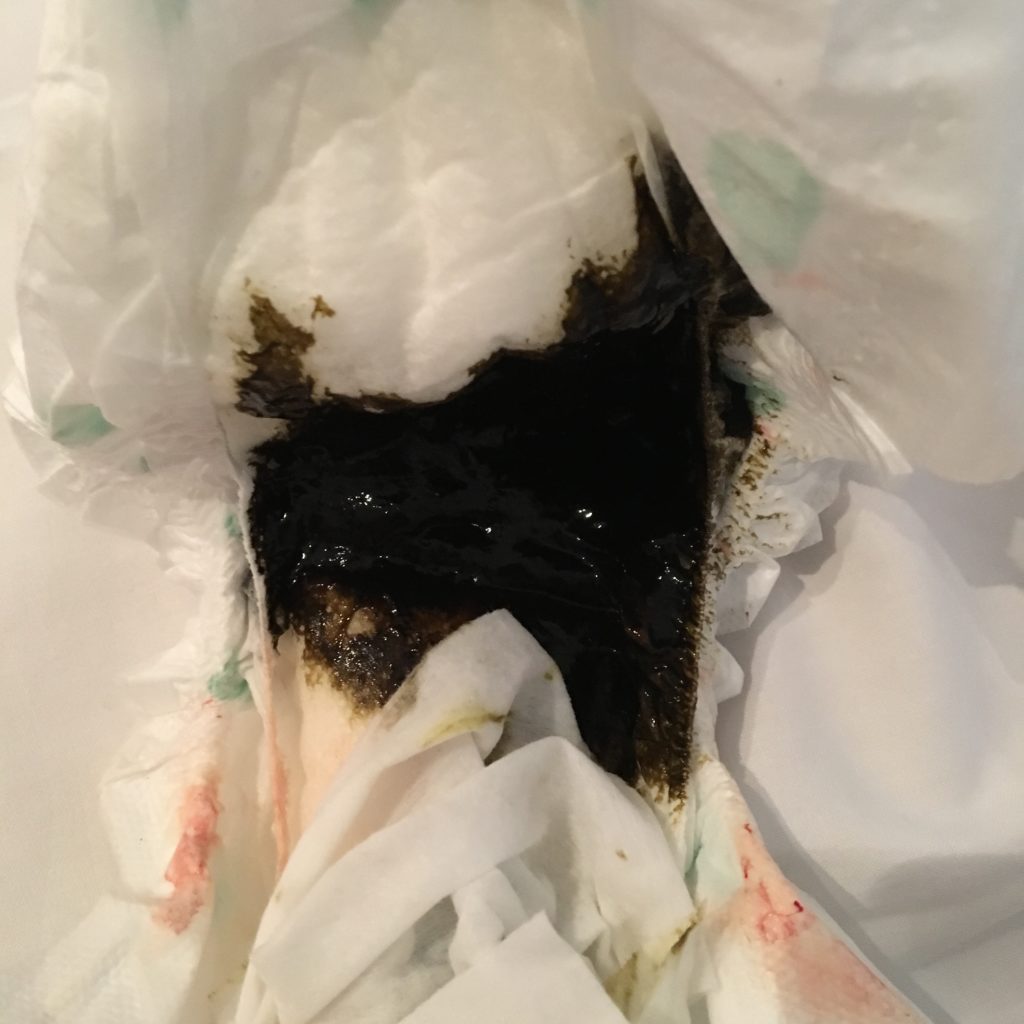 Most babies (around 90%) will pass their first meconium stool within 12 hours of birth. Some, between 8% and 10% of term deliveries, may pass it before birth leading to meconium stained amniotic fluid (MASF). Whilst this is, in itself, harmless if swallowed it may lead to respiratory distress if inhaled. Meconium is often described as thick and tarry and it is easy to see how it might plug small bronchioles leading to meconium aspiration syndrome (MAS).

The passage of meconium in utero is linked with fetal distress. As the number of pregnancies that go on beyond 41 weeks has dropped the incidence of MAS has also dropped.

One theory, based on animal models, is that periods of cord compression and subsequent fetal hypoxia lead to increased parasympathetic activity. This causes stronger waves of peristalsis coupled with relaxation of the anal sphincter and thus passage of meconium. Whilst meconium stained amniotic fluid is relatively common, only 2% to 3% of infants born through this liquor exhibit MAS. In the olden days (the 1970s) paediatricians aggressively suctioned the neonate’s airway in order to remove any meconium and this was thought to be the cause of reduced MAS mortality and morbidity. A large randomized controlled trial of over 2500 children with MSAF found no difference in rates of MAS or mortality if they had undergone intrapartum suction of the oropharynx.

A number of trials have also shown that routine intubation and suction of vigourous infants born through MSAF did not decrease the risk of MAS.

There appears to be no correlation between type of feed (breast milk vs formula) and time to passage of meconium. Delay in passage of meconium after day 2 occurs in 32% of preterm infants. The usual rate of passage (in unfed infants) is around one per day. As feeding is introduced stool frequency increases by one for every 50ml/kg  of milk.

The average amount of meconium passed is between 200 and 600g (Grulee and Bonar, 1926) which amounts to between 5% and 17% of the average infants body weight!

Failure to pass meconium in a timely fashion may herald intestinal obstruction. This may be due to a myriad of causes that are beyond the remit of this post.

Differential of failure to pass meconium

Meconium can be used to screen neonates for drug exposure in utero.

As a diet of amniotic fluid makes way for colostrum and breast milk, stool changes colour from a green-black tar to something else entirely. Whilst it should be a mustard yellow (wholegrain) in appearance, a pale stool may herald the presence of biliary atresia. Taiwan has a national stool colour card screening program to help detect the disease early whilst those of us who rely on technology might like to know that “there is an app for that“. 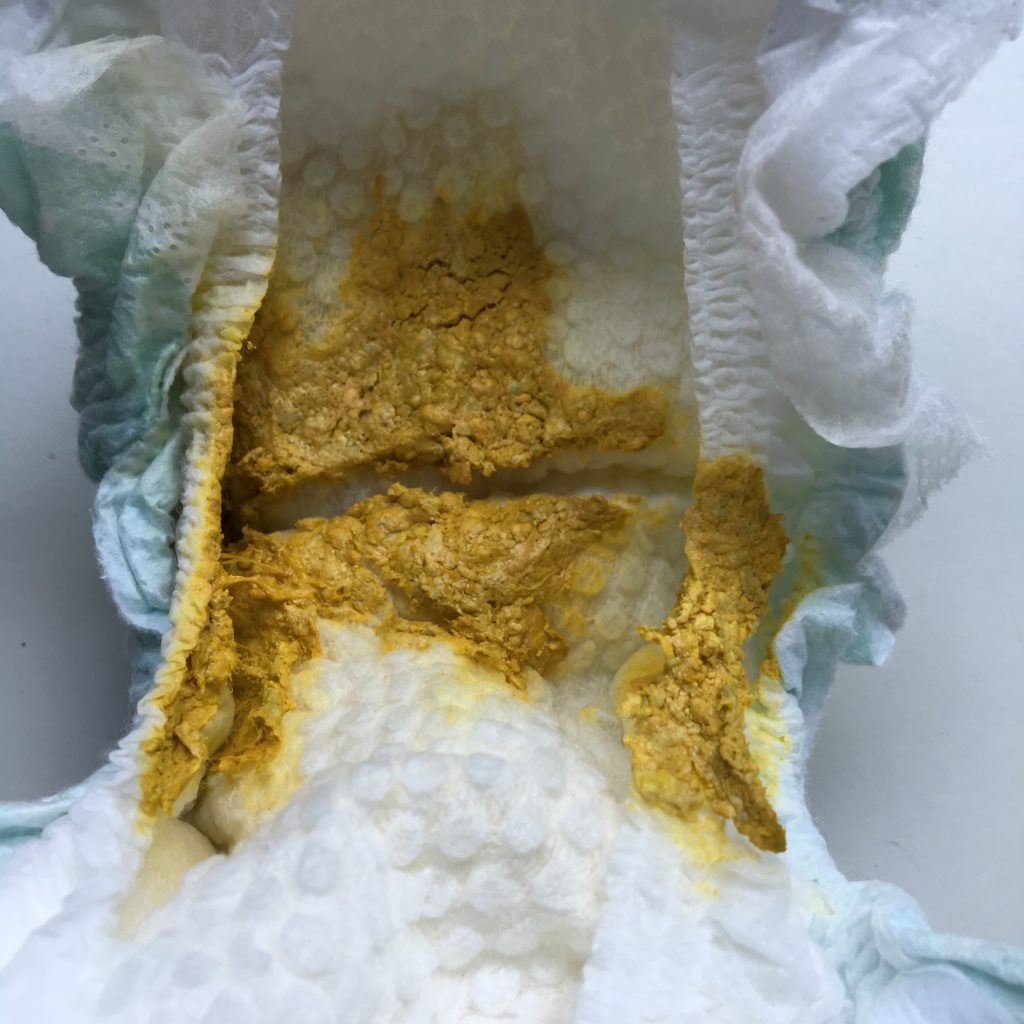 So is there a normal?

A small 1979 study collected a smorgasbord of samples on children ranging between birth and 24 months. Repeated studies have given provided similar data. 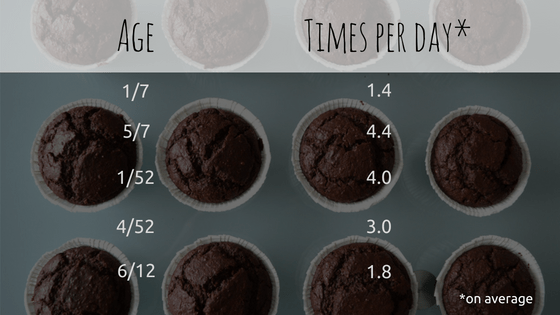 Stool frequency peaks around day 5 as lactation becomes established and then slowly drops to 4 actions per day by day 7.  Anyone that has changed a breast fed infant’s nappy will have marvelled at the ‘seedy’ nature of the poo.

Children that receive breast milk pass softer stools and do so more often than those that receive formula. It’s a different consistency from that of the breast fed child – it’s thicker and more like (smooth) peanut butter. By the time they reach 16 weeks of age there is very little difference between the two. 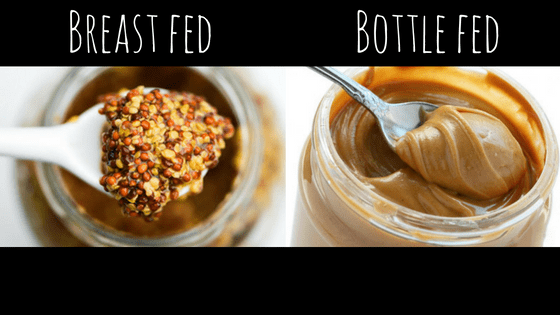 As children get older they tend to pass stool once (or more per day) dependent on diet. A fascinating study, performed on kids in the 1980s who seemed to subsist on a diet of snack foods, tinned spaghetti and fish fingers and chips found that most kids passed small sausage sized stools, that became harder with age. The mean transit time was around 33 hours – useful  information for parents of kids that have swallowed coins!

Steer CD, Emond AM, Golding J, Sandhu B. The variation in stool patterns from 1 to 42 months: a population-based observational study. Archives of disease in childhood. 2008 Aug 1.

Author: Andrew Tagg An Emergency Physician with a special interest in education and lifelong learning. When not drinking coffee and reading Batman comics he is playing with his children. He/Him @andrewjtagg | + Andrew Tagg | Andrew's DFTB posts
January 9, 2017 0