Home > View All > Step by Step management of febrile infants

The fortnight has seen two hot off the press articles by a group from the Basque Country. They are challenging the existing paradigm in the investigation and management of febrile infants with their “Step by step” approach. The approach questions the relative supremacy of the Rochester criteria as a basis for investigating and managing infants under 90 days with fevers and controversially considers managing a subset of “low risk” infants on the outpatient basis without lumbar puncture or antibiotics.

“Step by Step” – the new kid on the block – aims to risk stratify this group to both reduce the number of unnecessary investigations and treatments in this group as well as predict those patients at risk of serious bacterial infections (SBI). The Step by Step approach was first suggested by the same group in 2014. The algorithm is thus; 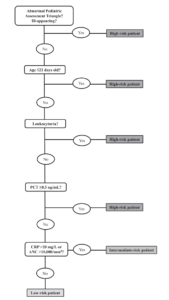 There are clear parameters for each of the components of the algorithm. To be considered “low risk” an infant with fever without source must be:

Firstly, the larger of the two papers is a validation study for the “step by step” method. The algorithm was applied retrospectively to 2185 infants presenting to 11 European Paediatric emergency departments over a 24 month period, with the aim of comparing the Step by step algorithm to the Rochester Criteria and Lab-score.

Population: A prospective study of 2185 infants aged <90 days presenting with a fever without source.

Intervention: Risk stratification via the “Step by step” approach to identify the level of risk for invasive bacterial infection.

Patients were excluded if there was any of 1) a clear source of fever on history & examination, 2) no fever at arrival and subjective/tactile ‘fever’ identified by the parents , 3) absence of 1+ of the mandatory ancillary tests, or 4) parents refused participation.

The paper presents findings separately between IBI & Non-IBI. The multiple definitions of bacterial infections seem very reasonable in theory, but in practice we’re probably concerned about “missing” a serious bacterial infection. Hence, I’ve reworked the calculations analysing IBI and Non-IBI together. Practically, this means that the Negative Predictive Value of “low risk” is 97.8%, with a miss rate of 11 per 1000. Here’s my working, based on the data provided in figure 3. 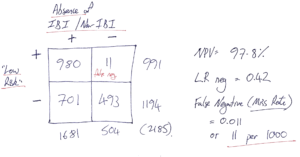 The other article from the same group published this week put the “step by step” approach into practice over a 7 year period at a single paediatric emergency department in the Basque Country. Infants in the “low risk” group were offered the no LP, no antibiotics and up to 24hours observation (with a view to discharge); there was planned follow-up and support for representation.

Population: A dataset of 1472 infants of fever without source is presented, however the analysis focuses on 767 at “low risk” of SBI as per the step by step criteria.

Intervention: This subgroup of patients were managed without lumbar puncture, antibiotics, 48hr admission.

Comparator: There was no control group for the trial

Outcome: 2 of 586 infants had a serious bacterial infection. 29 of 586 had a UTI (culture positive, leuks negative) and 51 returned for review due to persistent fever or irritability.

Additionally, assessment was done by a Paeds trained attending or resident. Safety mechanisms for the low risk group included a follow-up phone call or primary care practitioner review; 10 patients were entirely lost to follow-up. There were no differences in rates of return in patients observed for <6hrs or >6hrs in the short stay unit.

Within the “low risk” group, as per the step by step algorithm, a significant number received CSF examination (for persistent fever, irritability or poor feeding), or deteriorated. None of these infants had SBIs, although almost half receiving lumbar puncture had viral meningitis.

The study is an impressive example of putting your money where your mouth is, and an excellent example of a theoretical construct applied in the real world. I suspect it probably overstates the success of the no LP, no antibiotics, outpatient management group. Using the initial patients in the “low risk” group as an intention to (not) treat analysis from the 767 “low risk” as per the “Step by step” group gives a miss rate of 52 SBI per 1000; 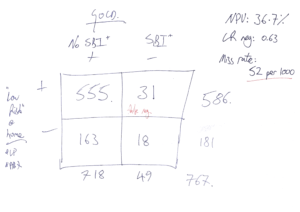 The title of the paper focusses on those infants as “low risk” who are do not receive a lumbar puncture and are then managed as outpatients without antibiotics. A reasonable point of focus, but in the context of the group’s overall goal – rolling out the step by step as a tool for risk stratification – I think they have identified the algorithm’s weaknesses.

This is an exciting development. There is more nuance than meets the eye in a febrile infant and whilst our current Australian standard of care is a “full septic screen”, the potential to reduce iatrogenic complications and overtreatment in this population whilst keeping these patients safe has some promise.

As the authors of these studies note, the actual rate of SBI in this population is low, but we likely also overestimate the risk of SBI; deVos-Kerkhof and colleagues attempt to illustrate this in their 2015 European Journal of Paediatrics article.

What are we actually comparing?

The stakes for a “rule out” algorithm – rather than a “rule-in” algorithm – are high. Considering that standard practice in this group is about reducing the risk, and I suspect an individual tendency to default to the safest option, the numbers and pragmatics of the algorithm would have to be breathtakingly good to modify practice.

I think the comparison against the Rochester criteria is ultimately flawed; the numbers need to stand alone with respect to having an acceptable miss rate. Additionally, the epidemiology of bacterial infections, vaccination and population health as a whole has changed markedly since the Rochester criteria was published in 1985.

The nuances of infection

Both studies describe a number of infants with urinary tract infections (UTI) (and normal leukocyte counts) with a significant pure bacterial growth; these patients are managed as “low risk” via the algorithm. In practice, it would be not uncommon for an infant with a “fever without source” to receive their UTI diagnosis during admission, with subsequent management for same. Most other studies I’ve seen in this area consider a UTI as a serious bacterial infection.

With respect to other infections, 44 of the 91 infants in the second paper had viral meningitis. Although not amenable to antibiotic treatment, there’s no mention of the rate of Herpes simplex encephalitis. More so, in many departments the initiation of acyclovir goes hand in hand with antibiotics in the management of this population until the HSV CSF PCR shows no virus. Additionally, symptoms and signs of viremia may warrant inpatient management or observation, and it’s my impression that “step by step” is vulnerable in this area.

Finally on this, I think it is relevant to bundle the SBI into a single outcome at the “low risk” stage. The IBI vs Non-IBI dichotomy is, I think, useful and relevant for unwell and very unwell infants (“high risk”), as it may be predictive of other metrics including outcomes, place of management and other clinical trajectories. Additionally, at the intermediate and high risk strata, the ratio of IBI:Non-IBI will likely be different to the low risk group. Alternatively, with a planned management of no treatment with antibiotics and discharge, I have sought to conceive all missed SBIs as just that.

Which test is best?

It would be interesting to see an analysis for the independence of each of the variables in this sample. Without a comprehensive review of the literature for each of the constituent parts of the step by step approach, I can’t honestly say that “no one test” can predict the likelihood of a serious bacterial infection in infants, although it’s what I’ve been taught for a long time. I welcome any robust evidence that contradicts this dogma.

On that front, although procalcitonin isn’t yet widely ordered in Australian laboratories, there is a growing weight of evidence that there it has some utility in this area. A paper from JAMA Paediatrics earlier this year suggests PCT is equivocal to CRP for SBI but more accurate for IBI.

Certainly, “Step by step” shows promise – the Rochester criteria and other American predecessors have had a profound influence on paediatric practice since their inception. There remains significant ground to cover to find the a safe medium of both an acceptable level of risk for missed SBI and the likelihood of over-treatment in this population.

7 thoughts on “Step by Step management of febrile infants”