Chemical attacks (or acid attacks as they are colloquially known) are increasing. The latest numbers show the UK has one of the highest rates of violent acid attacks per capita in the world. The latest figures released report 601 attacks in the UK in 2016 but 400 in first 6 months of 2017. London has emerged as a hot-spot for acid attacks in recent years and it is thought that many attacks still go unreported. 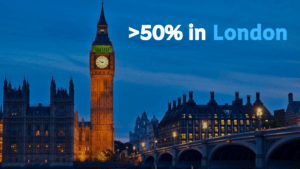 The demographics of the attacks are changing and what was once thought to be solely honour crimes in mainly the Asian population is now an outdated concept. Traditionally these crimes involved a male perpetrator and a female victim and were often “domestic’ or honour related incident. There are still relatively high numbers of these occurring in countries like Bangladesh, India and Cambodia.

However in the UK, data from 2017 showed that male victims make-up 67% and only 6% of the perpetrators are from the Asian community. The majority of victims and suspects are now white European or Afro-Carribean. Also it’s a crime that predominantly involves young people and tends to be gang related. 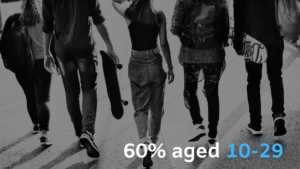 In our London based hospital we have certainly seen an increase in presentations of corrosive substance attacks and whilst we might, unfortunately, expect to see the odd 15 or 16 year old involved, the involvement of  very young children is unusual but cases do happen and are often widely reported in the media.

Many types of corrosive substances can cause a chemical burns. 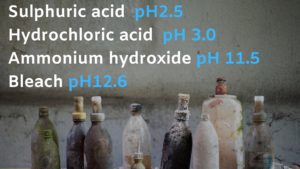 It is the ease with which these types of substances can be bought over the internet that is concerning.

Also from January 2018 a voluntary ban not to sell some corrosive substances to under 18s has also been introduced by some local stores and larger retailers like Tescos, Wickes and B&Q limiting the sale of sulphuric acid drain cleaner, strong hydrochloric acid and sodium hydroxide. 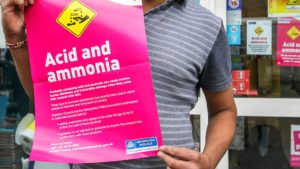 So you’re on shift in Paeds ED on Thursday evening at 6pm,  you’re due to finish at 7pm and just starting to think about that glass of wine, the sofa and the next episode of your current Netflix box set

The sister from resus comes through to let you know about an imminent blue call of a 13 year old girl involved in a chemical attack with suspected acid burns to her face and eyes and upper chest arriving in 10 minutes. 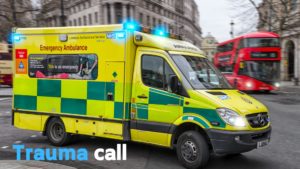 You need standard PPE – gloves, apron, mask and eye protection to protect you from direct contact with the acid/ alkali and to protect from splash decontamination when rinsing.

The trauma team is prepared – the ambulance crew hand over that she is a 13 year old girl called Sophia who has been out with her boyfriend (16 year old Jerome) that evening who is known to the police for gang related activity. They had gone to a chip shop when a group of youths attacked them – stabbing him in the abdomen and then tried to spray him in the face with an unknown substance but the majority has gone on Sophia  hitting her in the eyes, face and chest as she tried to protect him (he is fortunately 16 so is being seen by the adult team!) 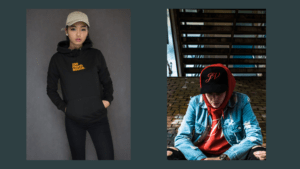 The paramedic team have rinsed her face with water but as they weren’t far away there has been little time to do anything else.

So what now?  You have a 13 year old screaming in pain. Adequate treatment of these injuries requires cooperation and this will never happen if you don’t address the pain immediately, especially in the smaller kids. 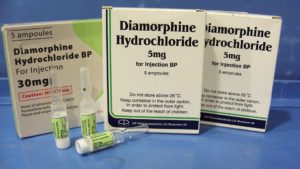 Get decent analgesia on board straight away – consider intranasal opioid and then further analgesia IV if necessary. Be generous, a spoonful of liquid paracetamol just isn’t going to cut it on its own.

Sophia is screaming – and she’s screaming not only because her eyes and face are burning but also because she’s petrified – a gang of boys have just tried to kill her boyfriend and:

She’s frightened of the police getting involved

She’s frightened of being scarred

Although most of us won’t have much, if any experience in treating these patients we can really make a difference by doing all the things we usually do so well in paediatrics. 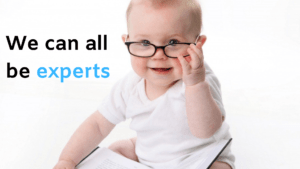 We can reassure her – the play specialists are amazing at engaging with teenagers. We can get our game face on and look relaxed and competent (even if you are faking it!) and we can make sure someone is trying to get her mum up to the hospital ASAP and just like thermal burns we can treat the burn but warm the patient.

Sophia is now calmer – she has iv access and morphine on board – her mum is on the way with the police and so now what? 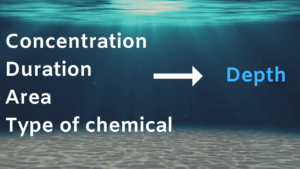 The extent of the burn is linked to a number of variables – our priority is to minimise the damage by removing the chemical as quickly as possible.

The exact chemical is rarely identified but knowing whether it is acid or alkali can be helpful.

Acid burns cause a coagulative necrosis is where the cells die but maintain their structure for several days so the full damage is only evident days later. They also precipitate tissue protein creating a mechanical barrier limiting further damage tending to be less severe than alkali burns. 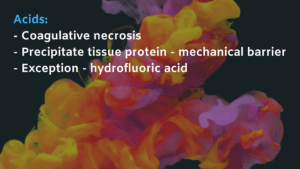 Alkalis are known to cause worse burns and this is because they are lipophilic i.e. they dissolve in fat and penetrate through the skin and eye more deeply than acid. Liquefactive necrosis occurs where tissues are liquified and saponification of fatty acids in cell membranes causes more destruction. The damaged tissue secrete proteolytic enzymes as part of an inflammatory response which leads to further damage. 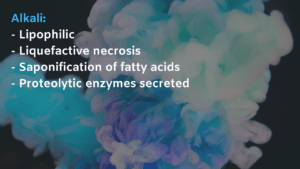 The full extent of the depth of the burn only evolves over several days requiring staged debridement.

Back to Sophia – unfortunately her friends weren’t aware of the public health campaign to try and improve the care of the theses injuries in the first few minutes. As soon as the emergency personnel arrived, she was rinsed with water and this was continued by the ambulance service. 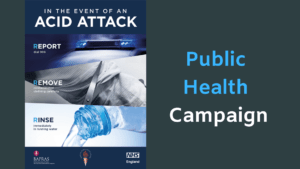 At the hospital it is really, really important to remove all her clothes and jewellery – even underwear as it may have been splashed with the rinsing solution and may be causing further injury without even realising it.

pH of skin is variable, therefore keep rinsing until you get a static pH within normal limits or put a drop of your rinsing solution on a part of the patient’s unaffected skin and then check their skin pH.  Eyes are more straightforward and you should aim for a normal pH. However chemical burns may need prolonged rising compared to normal thermal burns. 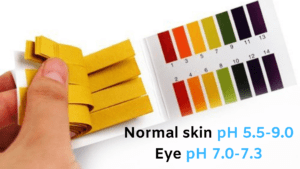 There are many options for rinsing solutions. Thinking back to basic science, water is freely available and plentiful and it mechanically rinses the skin. It dilutes the chemical which is good but the osmotic pressure of water is less than the skin and eye hence you get a wash in effect taking some of the chemical with it.

A better option is a more hypertonic solutions e.g. Hartmann’s or normal saline which don’t have the same wash in effect.

It appears the best treatment with increasing evidence to support this is now an amphoteric rinsing solution such as Diphoterine. It has previously been used extensively in industrial facilities as an emergency treatment for chemical burns but is now gaining popularity in medical setting. 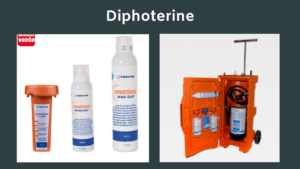 Diphoterine is amphoteric so is effective on acids or alkalis and neutralises the effects of the chemical far quicker than water alone – so helps to stop the development of the burn.

It is chelating and stops the chemical reacting with biological components of the tissues. It is also hypertonic so its osmotic pressure is greater than that of the skin or eyes and therefore limits the penetration of the product into the tissues. By neutralising the pH it also has an  analgesic effect, so is particularly useful in gaining control in children as reduces pain. A cost benefit analysis is required before wide spread use can be recommended.

Eye injuries can be severe and stressful. 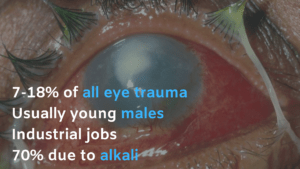 You can often feel as though you are adding very little and the patient needs an expert review. However, the main treatment acutely is to ensure adequate irrigation occurs which doesn’t require specialist expertise.

Sophia’s chest and face was rinsed with diphoterine as the pH was 2.4 on arrival – once it had settled to 6.0 persistently further irrigation was stopped. Her left eye pH was 7.4 and not affected but her right eye was 4.1 and so was treated with a diphoterine eye bath which she was able to cooperate with really well and the pH returned to 7.4

All chemical burns should be referred to a specialist unit.

Photographs were taken for the Burns unit and a percentage of Body Surface Area (BSA) worked out. A temporary dressing of cling film was applied and as her burns were significant she was transferred to the regional burns centre where she underwent staged debridement and reconstruction of some of the deeper areas.

As with all injuries in children then safeguarding must be considered and all of these cases will invariably involve significant safeguarding concerns and should be dealt with according your local policies. 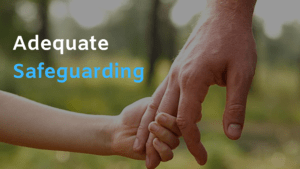 These cases are distressing and their frequency is probably only going to increase. Chemical injuries in kids are actually very straight-forward and can be managed really well if we are meticulous with our treatment and do the basics well.

Even though none of us are experts as these attacks are relatively rare in children, we all can be when we need to be.

1 thought on “pHirst Aid – Management of Chemical Attacks in Children”