Kristy is a 5-year old girl; her mother has brought her in due to her having started kindie. She has been invited to have a sleepover at a family friends house however she still wets the bed most nights of the week and is wondering about how to manage this.

Attaining continence – both daytime and nighttime – is a developmental milestone with a significant normal variation which is affected by both genetic and environmental factors.

At 5 years of age, approximately 15% of children continue to experience nocturnal enuresis (more commonly known as bedwetting). Every year beyond this, there is spontaneous resolution in ~15% of affected children (although it should be noted that the longer duration of NE, the lower the likelihood of spontaneous resolution). 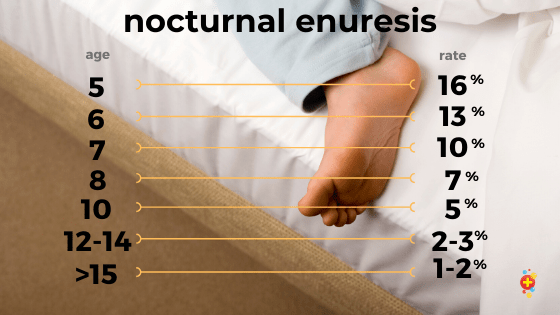 Boys are more commonly affected than girls (2:1) and there is a strong family predisposition (both parents = 77%, single parent = 43%). Only one-third of those affected will seek medical attention.

What is nocturnal enuresis?

When episodes additionally occur during the day, it is more appropriately referred to as diurnal enuresis/incontinence.

Incontinence should be classified as primary or secondary.

Why does nocturnal enuresis occur?

These factors may be primary to the child (eg. genetic factors) or secondary to an underlying condition (eg. polyuria secondary to undiagnosed diabetes insipidus) 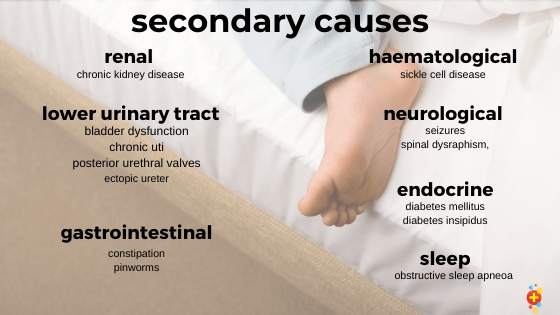 How to evaluate a child with nocturnal enuresis?

It’s almost all in the history – search for red flags!

Do you need to do investigations?

Investigations are not necessary for all patients and should be guided by history and examination. Consider:

Imaging and blood tests are not routinely indicated.

What are the treatment options? 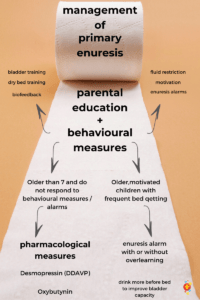 Important things to remember in treatment: