The imminent arrival of another Tagglet (not to be confused with aglet*) has prompted me to go back to my textbooks and refresh my knowledge of what to expect.  One of the problems of being a medical parent is being expected to know the answers to the most random of medical questions that are thrown out there. Is it supposed to look like that? Why are her hands that colour? And the question that is really being asked is, “Are they normal?” So here begins a series of posts on what is “normal” in neonates.

Life in utero must seem idyllic – floating around in apparent weightlessness, harsh sounds muffled and drowned out by the gentle lub-dub of a mother’s beating heart, no need to worry about where the next meal will come from or where the toilet is. It is no wonder that most babies slide out into our world screaming and crying. In this post I’m just going to focus on the cardiovascular system.

By the time the fetus has reached the 26th week of development it has a fully developed circulatory system, capable of dealing with an aquatic life. 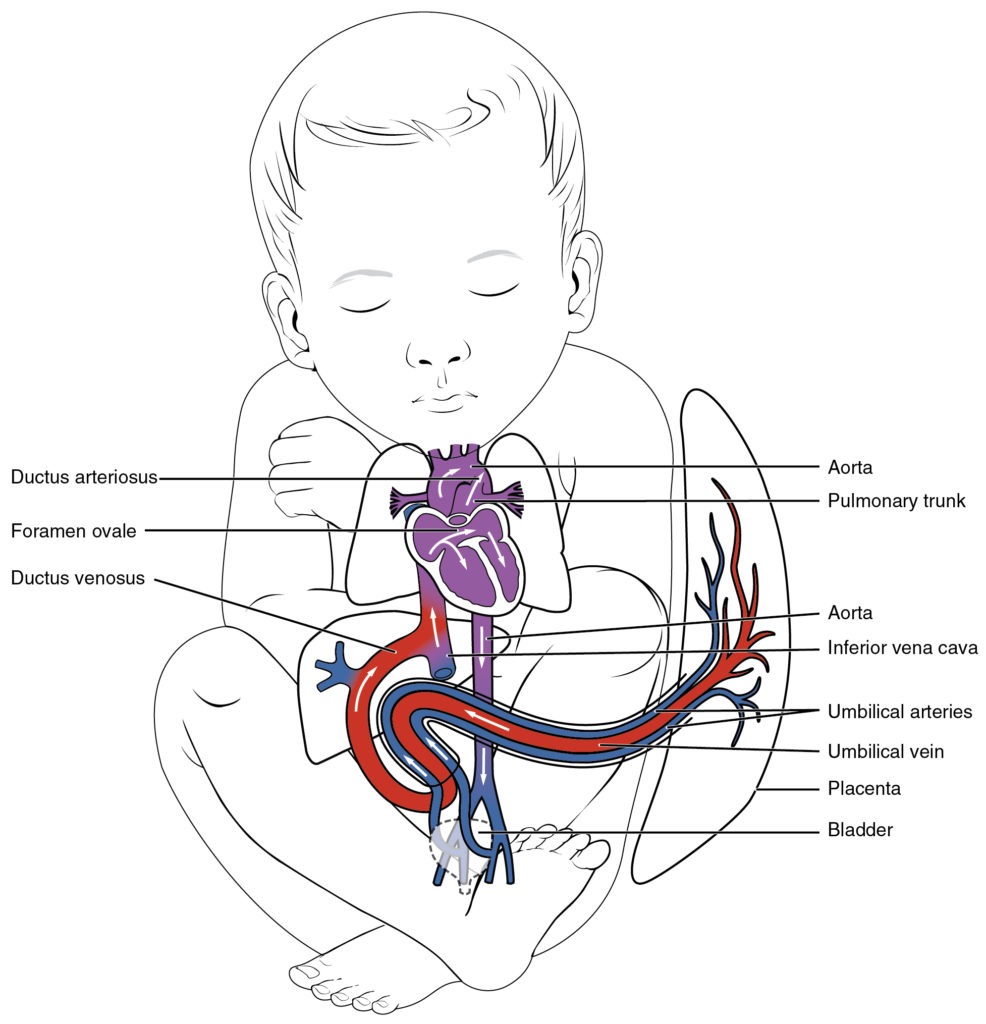 Gas exchange takes place in the placenta. The oxygenated blood is carried away, via the umbilical vein, towards the heart. Rather than pass through the filtering of the liver it travels via the ductus venosus directly into the inferior vena cava. This oxygenated blood mixes with the deoxygenated blood from the peripheries to flow into the right atrium. The majority of this admixture then passes through the patent foramen ovale (directed by the crista dividens) into the left atrium. From here it travels the usual path, into the left ventricle then into the aorta to supply the brain, heart and upper body.

Some blood also flows through the tricuspid valve into the right ventricle.  Here it is pumped into the pulmonary artery. High pulmonary vascular resistance leads to low pulmonary blood flow.   Instead, travelling from the pulmonary artery, it passes into the descending aorta via the ductus arteriosus. Only a small volume of oxygenated fetal blood actually travels through the lung tissue. The deoxygenated blood  is then carried back to the placenta via the umbilical arteries.

This deceptively simple flow is only made possible by the three shunts in the circuit.

The foramen ovale: Found in the inter-atrial septum, there is a flap valve (of the septum primum against the septum secundum) to prevent backflow from the left atrium.

The ductus arteriosus: Transits from the pulmonary trunk to the aorta to bypass the lungs.

The ductus venosus: This branch of the umbilical vein bypasses the liver to go directly into the inferior vena cava.

The most deadly day of anyone’s life is the day they are born. The first breath of air leads to dramatic physiological changes that set in play a cascade of events that make life outside of the womb possible. Initial knowledge of these changes was based on the observation of lambs, sacrificed on the altar of science as well as angiographic studies.

That all important first breath leads to a sudden decrease in pulmonary vascular resistance as the lung expands. Studies in fetal lambs have shown that this marked reduction in PVR occurs even with non-oxygenated gases so the change in resistance may be a mechanical consequence of opening up vessels. That being said improved oxygenation of the pulmonary blood also reverses hypoxic vasoconstriction. Blood then preferentially flows through the pulmonary bed and into the left atrium. As pressure increases in the left side of the heart it decreases on the right. With pressure in the left atrium rising due to increased pulmonary flow and increased pulmonary venous return the foramen ovale closes against the septum secundum.

The umbilical vessels constrict in response to stretch as well as circulating blood PO2. Once the placental circulation is taken out of the picture there is a drop off in flow through the ductus venosus and through the IVC. It closes passively around 3 to 10 days after birth.

The ductus arteriosus begins to constrict shortly after birth though there may be a small shunt from the aorta to the left pulmonary artery. Rising oxygen tension through the duct and decreasing levels of prostaglandin E2 (PGE2) from the placenta may lead to this constriction. In healthy, term, babies this duct is functionally closed by 96 hours though the anatomical closure can take a number of weeks.

These changes are initially physiological but become anatomical as epithelialization occurs.

Remnants of these fetal structures remain as non-functional ligaments or anatomical remnants of the fetal system.

The umbilical arteries become the medial umbilical ligaments and the superior vesical artery.

*An aglet is that little bit of plastic or metal at the end of a shoe lace – thank Henry Goldstein for that pub-quiz winning piece of trivia.

1 thought on “Transition from Fetal Physiology”