Spring has sprung, and another flu season in Australia is coming to an end. This year’s season appears to have been milder than usual, however the contributing factors are yet to be determined. 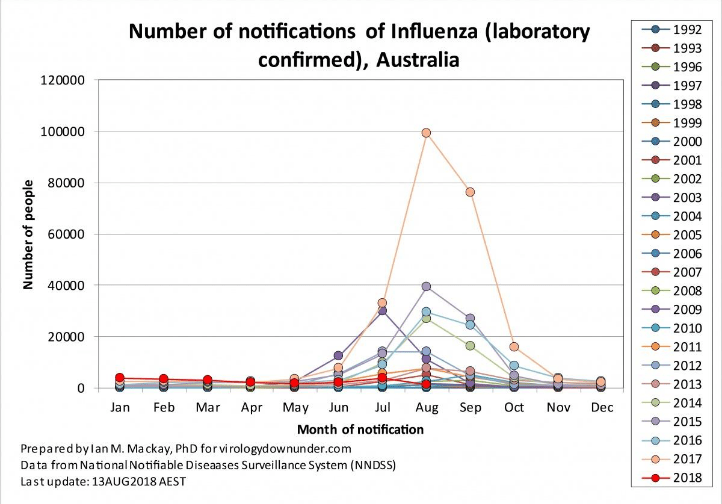 Oseltamivir (Tamiflu) is a viral neuraminidase inhibitor, and commonly used in children to reduce the duration of symptoms. However it is expensive, needs to be started within 48 hours of symptom onset, and there is an increasing prevalence of resistant influenza strains.  New anti-viral therapies are being investigated, and Baloxavir (Marboxil) is a selective inhibitor of influenza cap-dependent endonuclease which acts against multiple Influenza A and B strains, including viral neuraminidase resistant strains (in vitro and murine models).

This study (notably conducted for the Baloxavir Marboxil Investigators Group…) completed 2 separate randomized, double-blind, controlled trials. The primary outcome was time to alleviation of influenza symptoms in the intention-to-treat infected population as well as to assess the safety of Baloxavir and efficacy compared to Oseltamivir.

The phase 2 trial compared Baloxavir to placebo in just under 400 patients in Japan between 20-60 years of age. In the phase 3 trial, the intention-to-treat group compared Baloxacir, placebo and Oseltamivir in 1064 patients from Japan and the USA who were aged between 12-60 years old.

Inclusion criteria included: Non-hospitalised patients at 0-48 hours onset of symptoms. They had to have had a  fever, at least one systemic symptom, and at least 1 respiratory symptom associated with influenza. Phase 2 patients required a  positive rapid antigen test for influenza. The only other symptomatic medication allowed was acetaminophen.

In the phase 3 trial, patients receiving Baloxacir had just 26.5 hour shorter median duration of symptoms compared to placebo (53.7 vs 80.2 hours, p<0.001). Time to alleviation of symptoms was similar between Baloxavir and Oseltamivir, despite a greater reduction in viral load noted 24 hours after treatment with Baloxavir. The most common adverse events reported were gastrointestinal upset, nausea and diarrhoea, with rates similar between all three groups (20-25%).

Baloxavir appears to a safe anti-viral agent, with similar efficacy compared to Oseltamavir and superiority to placebo by shortening symptoms by just over one day. Baloxavir may become useful in the future with the ongoing emergence of viral neuraminidase resistant flu strains. However our take home message would be that the best bet of all would be prevention in avoiding the flu in the first place!

Article 2: How good do we think we are when it comes to rare diseases?

Paediatrics seems to comprise two main diagnostic groups; the first, larger volume of patients have common illnesses, with well-understood pathophysiology and management approaches undergoing refinement. Think about preschool wheeze, sepsis, neonatal resus, croup; the bulk of our workload. The other part of paediatric medicine comprises the care of children with a “long tail” of uncommon, rare and very rare diseases. With this in mind, the Australian Paediatric Surveillance Unit (based in Sydney), surveyed their membership on the experiences and needs around rare diseases.

The APSU invited 679 of their members to complete an email-based survey, with 242 (36%) responders. In addition to demographic data, respondents were asked about areas of difficulty while caring for children with rare diseases, the more frequent rare diseases seen by this cohort in practice and, what kind of education and resources the clinicians sought. Two-thirds of respondents cited difficulty regarding “delay in, or inability to make a definitive diagnosis”, whilst more than 1/3 reported difficulty with either the lack of available treatments, management guidelines, diagnostic guidelines, or uncertainty regarding support groups for the child and their family. More than 7 in 10 Paediatricians identified frequently caring for children with rare neurologic, metabolic or genetic disorders. From an education and resource perspective, many paediatricians identified feeling inadequately trained in their FRACP training in the care of children with rare diseases. Most utilised rare disease-specific resources including OMIM, as well as generalised resources, although any mention of FOAM was conspicuous by its absence.

It might seem an existential question, but I think this survey strikes at the heart of what it is to be a modern paediatrician. It’s not controversial to say that there are more refined and novel diseases described every day. Hence, our core professional role in the service of these patients necessitates both a diagnostic and management approach to (potential) “rare diseases”, as well as iterative knowledge of the relevant sources of information. Simply put, “making meaning of information, in the care of children” will increasingly supervene as the dominant role in our care of these kids.

This paper presents some interesting data regarding the state of how paediatricians seek out reliable, good quality information to support or underpin the management of children with rare diseases. It highlights that whilst CPD can be focussed on knowing the evidence on how to manage a common illness, or a “clinical update” on an emerging disease, time dedicated to knowing and understanding a modern, pragmatic approach to seeking information regarding rare diseases is likely to be of greater benefit to both clinicians, and, I’d speculate, the children in their care.

Bronchiolitis is one of the most common presentations of children in emergency departments in Western countries, but a magic bullet for treatment is yet to be found. Hypertonic saline, if beneficial, would represent an easily accessible and low risk intervention to reduce admissions or length of stay in hospital.

The use of nebulised hypertonic saline (HS) for bronchiolitis has  been a point of contention in paediatric practice. The authors of these papers compared a previous meta-analyses (HS vs. normal saline or supportive care in bronchiolitis to reduce admissions or length of stay) with a new technique of Trial Sequence Analysis (TSA). The idea behind TSA is that it has promise to be more accurate than traditional meta-analyses, or at least, estimate the potential errors in them. In a nutshell, this technique compensates for the phenomenon of multiple (interim) analyses and the heterogenity of the individual studies that leads to the accumulation of evidence over time. Analysing research into hypertonic saline using a  TSA shows a significant benefit of hypertonic saline, but the ‘definitive conclusion threshold’ (adequate information size) is not met, ultimately leading to the conclusion spoiler in the title “New method, Same answer.”

Hypertonic saline might be effective in the treatment of bronchiolitis, but we are not sure if the statistical significance represents a statistical (type I) error. As clinicians, we also should be mindful of the assumptions we make when analysing meta-analyses.

Article 4: Putting some reality into VR in ED

In this letter to ADC, A London Paediatric emergency department (The Royal London Hospital) describes their trial of virtual reality (VR) headsets as a method to reduce anxiety and pain in children undergoing brief painful procedures. These procedures include cannulation, venepuncture and foreign body removal. Forty children were divided between traditional distraction (play therapy) and receiving a virtual reality headset. (For the curious among you, it was a Pico Goblin headset with a ‘Happy Place’ animated interactive 360 expereince). Exclusion criteria were children below 5, those with a past history of epilepsy and those presenting with injuries involving the neck or higher, nausea or vomiting . Staff used the CEMS and FLACC scales. There was a non significant trend towards greater distraction amongst children with virtual reality headsets using the CEMS score. The children with virtual reality had a significantly lower FLACC score (0 vs 1.5) compared to traditional distraction. Of interest, the authors point out that almost one third of the patients in the VR arm were treated out of hours which make it a useful option when play therapists have gone home. The concern about impacts to the visual cortex were also raised and that use should be limited to 15 minutes which would be problematic for children needing more complex procedures.

Indovina et al have recently published a literature review looking into VR use as a distraction tool to reduce pain or distress during medical procedures. They came out in support VR as effective in reducing procedural pain and that side effects appear mild and infrequent. However many studies, like this article – had a small sample size and physiological variables were not utilised. This article adds to the growing body of evidence in support of virtual reality which will hopefully lead to further development of larger studies as well as tailored virtual reality hardware/software improvements in the future.

It looks like virtual reality is not simply a gimmick; but is effective in distracting children during painful procedures. You definitely wouldn’t want it to replace your play therapists though. Watch this space!

Article 5: Can NSAIDs help in bronchiolitis

Walsh P, Rothenberg SJ. Wheezing after the use of acetaminophen and or ibuprofen for first episode of bronchiolitis or respiratory tract infection. PloS one. 2018 Sep 13;13(9):e0203770.

Bronchiolitis is a ubiquitous winter respiratory condition that resists attempts to find an evidence based treatment (other than an expensive vaccine reserved for the most high risk infants or admission for oxygen therapy). The authors of this study have noted animal studies highlighting that NSAIDs may reduce the immune response that RSV, and other respiratory viruses produce, and postulated that ibuprofen may reduce future wheezing episodes if given during the first bronchiolitis-type illness.

They interrogated the Department of Healthcare Services in California Medicaid programme databases which assists children from low income families. In order to receive healthcare support all contacts with these families are digitally documented with a total cohort of nearly 100000 children utilised for the study. The statistical approach was quite complex but various data analysis hypotheses were put forward essentially examining whether a prescription of antipyretics around the first documented diagnosis of bronchiolitis was associated with subsequent presentations for wheeze in the following year.

If it could be shown there was an even a small effect of ibuprofen or paracetamol on future wheezing then this would be quite a game changer in the management of bronchiolitis. There are a lot of unanswered questions however. While the authors report this was a retrospective study, it was really a retrospective insurance process investigation. Clinical details were only of those recorded for financial audit purposes and while a great deal of care was taken with sensitivity analyses not all anti-pyretic use was recorded. Ultimately the methodological approach taken could only reveal associations rather than causation.

Ibuprofen and Paracetamol are NOT treatments for bronchiolitis; no change in practice required. But this study demonstrates there may be much more to the pathophysiology of one of our most common conditions that we realise.

If we have missed out on something useful or you think other articles are absolutely worth sharing, please add them in the comments!

That’s it for this month. Many thanks to all of our reviewers who have taken the time to scour the literature so you don’t have to.