It has become increasingly clear that children are less frequently affected by severe COVID-19 than adults. However, a new ‘hyperinflammatory syndrome’ in children associated with SARS-CoV-2 has recently been widely reported in the media with notable clusters of cases in New York City and London. This review will outline what we know so far about this new syndrome and what it means for us as clinicians.

Why does Kawasaki disease keep being mentioned?

Kawasaki disease (KD) is a vasculitis of childhood characterized by a prolonged fever in addition to some characteristic changes. There are many other features that are not present in all children leading to the concept of an incomplete KD presentation.  KD is most common in children aged 6 months to 5 years, however, it can occur in children of any age.

The exact trigger of KD is unknown. There is a huge list of viral pathogens that have previously been associated with KD, including coronavirus though there is no known consistent trigger. Because of this, there is no specific test that can diagnose KD and it is diagnosed on clinical criteria alone.

Early recognition of KD is critical as treatment with aspirin and IVIG in the acute phase decreases the risk of significant coronary artery aneurysm but even with treatment observational studies have shown even with treatment early CAA can occur in up to 20%  of cases. KD is one of the most common causes of acquired heart disease in children (alongside rheumatic heart disease). Despite being well recognized by the paediatric community, KD is still quite poorly understood.

A mixture of the clinical features of KD seems to be apparent in many children with this new hyperinflammatory syndrome. 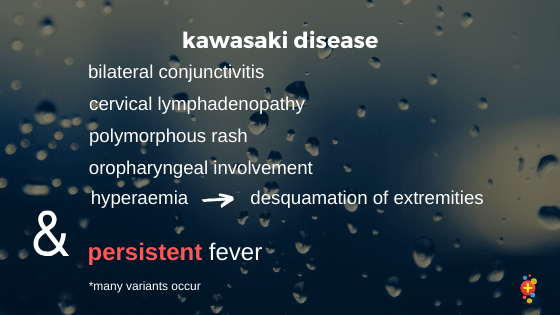 How does SARS-CoV-2 and PIM-TS fit in?

PIM-TS stands for Paediatric  Multisystem Inflammatory Syndrome – Temporally Associated with SARS-CoV-2. It is the current name given to the hyperinflammatory state seen in children with exposure to SARS-CoV-2.

There are many similarities between the clinical presentation of PIM-TS and Kawasaki Disease, in particular, the unrelenting fever, rash, conjunctivitis and peripheral oedema. Vascular involvement has also been demonstrated with echo-bright coronary arteries in all children, and a giant coronary artery aneurysm in one child.

A case definition was rapidly produced by the RCPCH and is helpful to define PIM-TS further:

There are some particularly notable features of PIMS-TS including abdominal pain and gastrointestinal symptoms that are predominantly early symptoms. They are less commonly seen in Kawasaki Disease

Then the Centre for Disease Control (CDC) in America came up with another name for the same syndrome, MIS-C, which stands for Multisystem Inflammatory Syndrome in Children.

What evidence do we have currently?

The first case series to describe this cluster of children was published on May 7 2020 in Lancet by Riphagen et al. Subsequently, an observational cohort study of children in the Bergamo province, Italy, was published on May 13 2020 showing a 30-fold increased incidence of KD during the SARS-CoV-2 pandemic. Interestingly, they highlighted a higher rate of cardiac involvement and features of inflammation (‘macrophage activation syndrome’). A preprint from France has described a cluster of 17 cases within 2 weeks presenting in a similar manner. Clusters of children with similar presentations have been reported by news outlets in the United States and Spain. Abdominal pain, vomiting and diarrhoea have been the predominant early features so far in all cohorts.

Of note, there are yet to be similar reports from the  Asian epicentres that were first affected by the virus.

6 of 8 children described by Riphagen et al were of Afro-Caribbean ethnicity.  A higher rate of KD in Afro-Caribbean children in the United Kingdom has also been shown in previous reports. After the publication of this case series, Evelina London Children’s Hospital has managed >20 such cases in children. Informal reports have indicated that 20/21 are from BAME groups. The majority have been tested for SARS-CoV-2 serology and been found positive (indicating a previous infection), despite a minority of them testing positive for the virus at the time of admission. This is the same in the French cohort where 88% tested positive for SARS-CoV-2 antibodies.

How should PIMS-TS be managed?

At this stage, we have more questions than answers about both the short and long term management of PIMS-TS. The RCPCH guidelines provide extensive advice on the suggested early medical management and investigations, coupled with ongoing monitoring and treatment. Importantly, robust discussion with a tertiary centre that includes paediatric infectious diseases, cardiology and rheumatology, must be part of the child’s management.

All children described in the Riphagen study were treated with intravenous immunoglobulin (IVIG) and most were treated with aspirin, as a child with Kawasaki disease would be. In addition, all children received broad-spectrum antibiotics. The role of other immunomodulatory therapy is uncertain at this time. 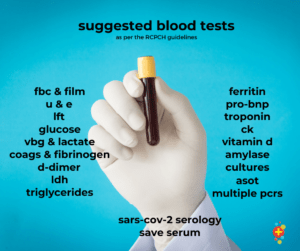 What research is being done?

As this is a new entity research is of huge importance, and in the UK children are actively being recruited into clinical studies. There are many questions that need answering. What ongoing investigations do we need to do? What is the long-term consequence of this syndrome? Should all children with Kawasaki Disease be tested for SARS-CoV-2 (either PCR or serology)? Could mild cases of COVID-19 be associated with cardiac sequelae? Should PIMS-TS be treated acutely with IVIG and aspirin as is the case with KD? These questions are hard to answer. Given the low incidence of SARS-CoV-2 in children, perhaps there needs to be an international registry of PIMS-TS cases.

How does PIMS-TS affect you?

There has clearly been a lot of media interest in PIMS-TS but it is still an extremely uncommon disease entity in the context of all children presenting to emergency and acute care services. The vast majority of children, including those who were critically ill, have made a good recovery. With a new condition for us to consider, there is a two-fold danger:

So far, the majority of children have been very unwell. It seems reasonable to really only think about this condition in admitted children that have signs, symptoms and investigations outside your normal frames of reference. If a clear cause for the presenting illness isn’t known and inflammatory markers high (CRP > 150) then further review and investigation is probably warranted. Otherwise performing investigations which we are usually unfamiliar with such as ferritin, d-dimer and troponins in all children with a persistent fever is likely to cause more problems than it will solve. Certainly, these children should have regular observations in keeping with your departmental policy and ensure that escalation processes are followed.

A new hyperinflammation syndrome has emerged in children. It seems to be temporally associated with the COVID-19 pandemic. The majority test positive for previous SARS-CoV-2 infection.

There is an overlap with some features of Kawasakis disease and other hyperinflammatory syndromes, often with shock, and with little to no respiratory compromise

The mechanism of the illness is unknown but research has already begun.

There are no specific management options at present, though early discussion with paediatric sub-specialists (especially infection/rheumatology/cardiology) seems prudent.

Also, take a look at

Multisystem inflammatory syndrome in children from Brad Sobolewski at PEMblog