8 year old Albert was playing indoor cricket at school when he was struck in the face with the cricket bat.  Although he did not lose consciousness he is complaining of a severe headache and double vision. He has already vomited five times in the department.

You start your work up in the standard way - with history. What do you want to know?

You need to rule out a serious head injury in the child using your favourite paediatric head injury guideline – CATCH, PECARN or CHALICE. Whichever rule/instrument you choose though, Albert is going to fall through the cracks due to his persistent vomiting.

Moving on to examination now, what are the key points to look out for?

Examining a vomiting child can be challenging and so a dose of a sublingual anti-emetic agent, such as ondansetron, will make things much easier. There is the theoretical risk that anti-emetics may mask symptoms but you have already decided you will need to image the child and so it is perfectly safe.

How do you assess visual acuity in a child?

Visual acuity is the vital sign of the eye and should be recorded in all patients that present with visual problems. Dr Tim Root has produced an excellent video on the paediatric eye exam.

What else should you look for?

As well as acuity you need to check eye movements, and possible associated diplopia. Restriction of upward gaze suggests  entrapment of either the inferior rectus or its associated fat.

Traumatic mydriasis, corneal abrasions or lens dislocations (although extremely rare in children) can also cause an acute visual disturbance following a blow to the orbit.

Albert’s eyes look normal with no peri-orbital bruising or bony crepitus though he does have ongoing pain and restriction on vertical gaze.

The oculo-cardiac reflex is a well known physiological phenomenon –  in fact it has been used to revert patients in SVT. In this case it is characterised by bradycardia, nausea, and near-syncope – symptoms which could easily be confused with those of a rapidly expanding intra-cranial haemorrhage. Afferent impulses from the opthalmic division of the trigeminal nerve pass through to the reticular formation with efferent effects mediated by the vagus. There are isolated case reports of fatalities due the reflex.

Albert continues to feel nauseated and has pain on upward gaze. After quoting the PECARN guidelines to your friendly radiologist you organise a CT brain with additional views of the facial bones. Here is a single coronal slice - what does it show? 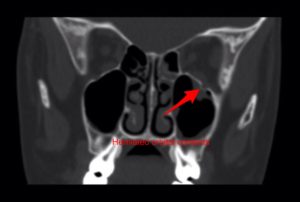 He has a ‘trapdoor’ orbital floor fracture. These ‘white-eyed’ orbital fractures are often clinically unimpressive with minimal external signs of damage. Damage to the thin orbital floor leads to the formation of a trapdoor of  bone that collapses inferiorly allowing orbital contents to herniate through.  The ‘trapdoor’ then springs back trapping the herniated fat leading to restriction of upward gaze.  Whilst orbital contents are easily visible in this scan they can be hard to spot and intra-operative findings do not always correlate well with imaging. If the child complains of diplopia and vomiting and signs of the oculo-cardiac reflex with no apparent fracture they should still be discussed with the local maxillo-facial service.

How should you manage this?

Children with ‘trapdoor’ fractures can have persistent diplopia and may require operative fixation to restore normal eye movements. Operative repair also reduces the likelihood of long term complications such as ischaemic muscle necrosis.

The CT scan showed no evidence of intra-cranial injury but bony views of the orbit revealed a trapdoor fracture. Albert was referred to maxillo-facial surgery for admission and operative intervention. Follow-up at six months was unremarkable with full resolution of symptoms.

Sturm JJ, Simon HK, Khan NS, Hirsh DA. The use of ondansetron for nausea and vomiting after head injury and its effect on return rates from the pediatric ED. Am J Emerg Med. 2013 Jan;31(1):166-72