Home > View All > Non-specific symptoms in the emergency department

Non-specific symptoms in the emergency department

Non-specific symptoms in the emergency department are common: headache, vomiting, lethargy, blurred vision…but do you include a brain tumour in your differential? Are you confident in spotting the signs and symptoms of brain tumour? Are you asking the right questions to know when to reassure, review or refer your patient?

Five month old Molly is brought to the emergency department with vomiting after feeds. She has been diagnosed with reflux and is on gaviscon and ranitidine with ‘no effect’. The parents are upset and fed up as the general practitioner has said he cannot prescribe omeprazole and that he will refer to paediatrics. This will take three months. They have come to ED instead.

A little exercise. Write down all the signs and symptoms of a brain tumour you can think of. You can use it later.

Ten children are diagnosed with a brain tumour each week in the UK. The 5 year survival rate is more than 70%, however two-thirds of survivors are left with a moderate to severe disability. Most importantly, more than 50% of brain tumours are diagnosed in the emergency department. Early diagnosis is key to limiting overall brain injury and preventing severe disabilities for survivors. Unfortunately brain tumours have one of the longest total diagnostic intervals (TDI) – defined as the time from symptom onset to diagnosis – of all cancer types despite being the commonest cancer cause of death in children.

Why the long delays to diagnosis?

The reasons are multi-factorial: non-specificity of symptoms, age of child, location of tumour and a perception that organising an MRI in a child is a right pain (which let’s be honest, sometimes it is).

The symptoms are frequently non-specific and can mimic other more common conditions such as a migraine, gastritis or post viral fatigue. Presentations also vary depending on the child’s developmental age. For example, babies compensate well for raised intracranial pressure due to unfused sutures and open fontanelles. As a result they may have infrequent vomiting with a slowly increasing head circumference as the only early signs of raised ICP. (Do you routinely measure and plot head circumferences in babies with vomiting?)

The location of the tumour is also important. Did you know that 50% of children with a brain tumour have a NORMAL neurological examination at diagnosis? (I didn’t either) Some tumour locations will not cause raised intracranial pressure so you will not see the “commonly expected” symptoms of headache and vomiting. There will be different presentations depending on the location; a tumour in the brainstem will present with cranial nerve palsies and ataxia whereas a central tumour will present with headache, nausea/vomiting and visual symptoms.

Moreover, most of us do not routinely think of it within their differential. You see a sick neonate and immediately you think cardiac, sepsis or metabolic. Phenylketonuria is four times less common than a brain tumour, however we are less likely to miss a metabolic diagnosis as it is engrained in our list of differentials.

What guidance is available?

The Children’s Brain Tumour Research Centre based in Nottingham (UK) developed the NICE-accredited Brain Pathways guideline which has been revised and re-published in February 2017. It can be found on the HeadSmart website (www.headsmart.org.uk).

HeadSmart Early diagnosis of Brain tumours is a national UK-wide public and professional awareness campaign launched in 2011 to amplify the NICE-accredited guideline. Data on TDI has been collected nationally from all 18 Children Cancer Centres in the UK. The median total diagnostic interval in the UK was 14.4 weeks prior to the guideline and campaign, and has now reduced to 6.5 weeks in 2015. 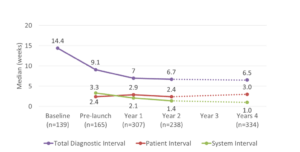 What can you do in the emergency department?

Management of acute (end-stage) raised intracranial pressure (sunsetting of eyes, cushing triad etc) is fairly straightforward within the emergency department. They arrive in resus, get driven through the CT scanner and the neurosurgical team sprint to the rescue. This is a late diagnosis. The brain injury is already severe. If the child were to survive post treatment, they will more than likely have a moderate to severe disability.

Early diagnosis can be tricky and in the emergency department relies on accurate and diligent safety netting and review. Children with brain tumours can look relatively well. Their observations and neurological examination may well be normal. The HeadSmart symptom card and decision support tools are quick and easy to use during your clinical encounters.

Firstly, if a child presents with any symptom listed on the symptom card below, ask whether any of the other symptoms are present and for how long. Persistent symptoms are concerning i.e. on most days for more than four weeks for headaches and more than two weeks for all other symptoms. If they have two or more persistent symptoms on the list, they warrant an MRI scan. (Time to look back at the list you made earlier. How many did you get?)

Secondly if the child doesn’t meet the criteria above but you aren’t quite sure what to do use the decision support tool (DST). It is based on the guideline and gives you easy to follow advice about when to reassure, review or refer your patient. It also includes a list of worrying features and diagnostic pitfalls.

Let’s look at the vomiting DST: 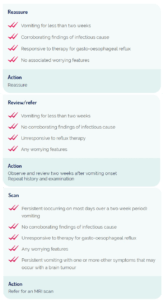 Molly has had the vomiting for more than two weeks and it is currently not responsive to reflux therapy for reflux so she cannot be reassured. The symptom journey of brain tumours follow an acquisition and accumulation pattern. As the tumour grows the patient will develop more signs and symptoms. For this reason, safety-netting and review are the two most important things we can do/organise in the emergency department to encourage early diagnosis – it may not be us diagnosing the child but we can ask the parents to see their GP two weeks from symptom onset or book them into a clinic for review.

The full decision support tool can be found on the website. One of the most useful parts are the diagnostic pitfalls where there have been delays to diagnosis time and time again.

What happened to Molly?

The doctor in the emergency department measured the baby’s head circumference. In comparison to the birth and day ten head circumference, it had crossed three centiles and was not in line with her weight and length. Looking at the decision support tool vomiting plus increasing head circumference warrants a scan. She was admitted and had an MRI the same day which is shown below. 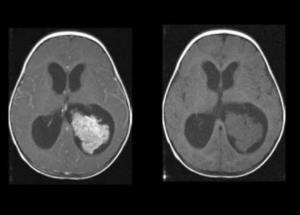 Molly has a benign choroid plexus papilloma. She had a full surgical resection of the tumour which is curative. Sadly, due to the size of the tumour at diagnosis, she has substantial visual impairment.

Wilne S, Koller K, Collier J et al. The diagnosis of brain tumours in children: a guideline to assist healthcare professionals in the assessment of children who may have a brain tumour. Archives of disease in childhood. 2010; 95(7):534-539.