As I cycle home after a gruelling 12 hour shift, I see strange flashes from the corner of my eye. At the cafe where I have breakfast with my partner, I accidentally start buttering a tomato. I’m struggling to follow the flow of the conversation – all I can think of is sleep. Back home, I turn on the shower, expecting the water to hit my head – and realise that I’m still wearing my helmet. When I do finally get to bed, pulling the curtains closed on the beautiful day outside is physically painful. While everybody else is having fun – in the park, at the pub, enjoying the sun – I’m trying to ignore the slivers of light which creep into the bedroom, scrunching my eyes so tightly closed that I think might pull a muscle. And on top of all this – the exhaustion, the mental lapses, the irritation – I’m worrying about whether I’m going to be able to get enough rest to avoid feeling jet-lagged for the next two night shifts.

In order to keep our society running, many people – security guards, transport workers, and healthcare professionals among them – have to work night shifts. But while awareness of some of the costs of night shift work – including heightened risk of heart disease and certain cancers – has been increasing in recent years, many aspects of night shift work remain under-discussed. One of these aspects is ‘night shift anxiety’: the mentally trying unease or fear in anticipation of, or as consequence of, night shift work.

As an A&E nurse, I find there are several aspects of night shift work which can generate or exacerbate anxiety. One of is the relative isolation that characterises the working environment at night. While the world outside shuts down, those of us working in A&E have to remain as switched on as the overhead lighting. And because everything else has shut down, when something serious happens we have to deal with it without much of the support we would otherwise receive. The hospital itself is quieter and fewer members of staff are around. Senior help is harder to come by and other departments and facilities – who we might otherwise reach out to for support – have shut, with staff members having long since gone home. And unfortunately it’s not the case that A&E conveniently follows the rhythms of the waking day, with people only getting ill or injured during working hours. Most of the deaths I’ve encountered in the paediatric department in which I work have happened during night shifts. While any death is a traumatic event for a healthcare worker, there is something particularly grim about having to leave a message on the coroner’s answer phone because their office isn’t open at night.

In addition to the more isolated working conditions during night shifts, people regularly working nights can experience another type of isolation – isolation from their friends and family. A recent ESRC study  found that night shift workers had significantly less time for face-to-face social interactions – everything from playing sports or volunteering, to simply hanging out with friends – and that this had a negative impact on their mental health. For me, this is one of the major contributors to the anxiety that can build up around night shifts. Not only do I worry about the shift itself, but I also fret about how the irregular and unsociable sleeping, waking and socialising patterns that accompany night shift work will impact my personal relationships. 2pm on a Saturday afternoon might be the perfect time for a barbecue for most of my friends, but for me it means turning up bleary eyed, sleep deprived, and still feeling drained from a 12 hour shift that prevented me from curling up in bed until after 9am. And because night shift work is something that most people have no experience of, it can be hard for others to understand why their plans need to be moved around to accommodate the one person who was working late. ‘Why are you always working nights?’ I’ve been asked, as if it’s a voluntary thing, rather than a necessity for a functioning emergency services system (about as understanding a question as asking a Londoner why they pay so much for rent).

FOMO (Fear Of Missing Out) is often mentioned in a joking way – like when you can’t make your friend’s birthday party because you’re on holiday – but when it turns into something chronic and inescapable, a necessary adjunct to your job, then it can become a serious mental burden. There isn’t anything funny about the sense that you’re drifting away from your loved ones, having to miss, or be only half-present, at key events in your friends’ lives. On top of this, you can come to resent others for their freedom, for being part of the normal world of 9-5 employment and set patterns of free time which most people can enjoy together. When I’m in the middle of a run of night shifts, particularly if they fall over a weekend, I often find myself getting annoyed at my partner, at his ability to see friends and make arrangements that I simply can’t.

This experience is known as ‘social isolation anxiety’, and is common among night shift workers, even if many may not be aware that this is the case. Indeed, the fact that many healthcare professionals are unaware that night-shift anxiety can be a common ailment, shared by their peers, may be one of the most harmful aspects of the condition. We’ve already seen how night shift work can lead to feelings of isolation and loneliness, and a sense of being out of sync with the world. When, in addition to this, people suffer from negative thoughts and feelings that they think are unique to them, and a result of personal failings or a lack of ‘resilience’ rather than the inadequate support structures currently in place for night shift workers, the combination has the potential to become particularly toxic.

Although the situations I have described, and the feelings that come with it, are to some extent an unavoidable aspect of working in emergency services, there are steps that can be taken to limit nightshift anxiety. One thing that has worked particularly well for me is making an effort not to forsake social activities due to a perceived need to be ‘ready’ for an upcoming nightshift. This is a common habit among night shift workers. Because of worries about how difficult the shift will be, and the need to be as alert as possible for it, many of us turn down opportunities for socialising to make more time for rest or sleep. An A&E colleague told me that as well as planning meals in advance of night shifts, she doesn’t go out or do any social activities in the days leading up to them. I used to do this as well: forcing myself to stay in bed throughout the day preceding a night shift, and not seeing or speaking to anybody before turning up at the hospital that evening. But over time I realised that this didn’t work for me – it was making my sense of isolation and loneliness worse, intensifying that uncanny feeling of being out of sync with the world, and compounding my anxiety for the shift itself. I now try to enjoy myself as much as possible on the day of a night shift, just as I would do on any day off. I go the gym or do a class, meet a friend for lunch, read a book in the garden (and, of course, treat myself to a lie-in). Experience has taught me that doing this leaves me feeling more refreshed and ready for the shift than if I’d spent the day cocooned in bed, trying to block out the sunlight. And above all, it’s much better for my nerves and my well-being.

Other ways of lessening the impact of nightshift anxiety include ensuring that employees take breaks – allowing them vital moments of relative peace and the opportunity to relax during shifts – and taking steps to reduce the fatigue and exhaustion caused by night shift work, which can exacerbate anxiety and other forms of mental and physical ill-health. Occupational health or your GP may also be able to help by providing access to counselling or other forms of treatment to help manage anxiety. On top of this, it is vital that policymakers take a closer look at ways in which support structures can be established to help employees deal with the effects of night shift anxiety. As Dr. Michael Farquhar, consultant in children’s sleep medicine at Evelina London, argues, “as the pressure on the NHS grows ever stronger, it becomes even more important that strategies to support the staff delivering care are put in place.” He draws an analogy with workers at airports: “Airports close runways rather than allow air traffic controllers to work without breaks, because anything less is simply not safe. The NHS’s runways must always stay open – but that means we must think even more about how we support our staff to do so safely.” And in this context “safely” means safely both for patients and for staff, including ensuring staff are protected from mental health complaints caused by working conditions.

It’s true that some level of nerves will always be a feature of emergency services work, and this is not necessarily a bad thing – lives do depend on our actions, and it’s important that we take this responsibility seriously. But commonplace worries can easily tip over into something more serious. As a Clinical Psychologist, consulting to a London-ED recently told me,- “It can be helpful to distinguish between what is normal pre-night shift nervousness – because we know how hard those shifts can be; and a pattern of anxiety that is effects our day-to-day lives.” If the latter sounds familiar to you, as it does to me, it may be time to look into ways of addressing it.

My hope is that by bringing nightshift anxiety up as a topic of conversation, and encouraging more people to share their experiences of it, we can raise awareness of it as a condition, recognise it as something that is normal and common – not a nameless private issue to be ashamed of – and address it as an issue in need of a solution. 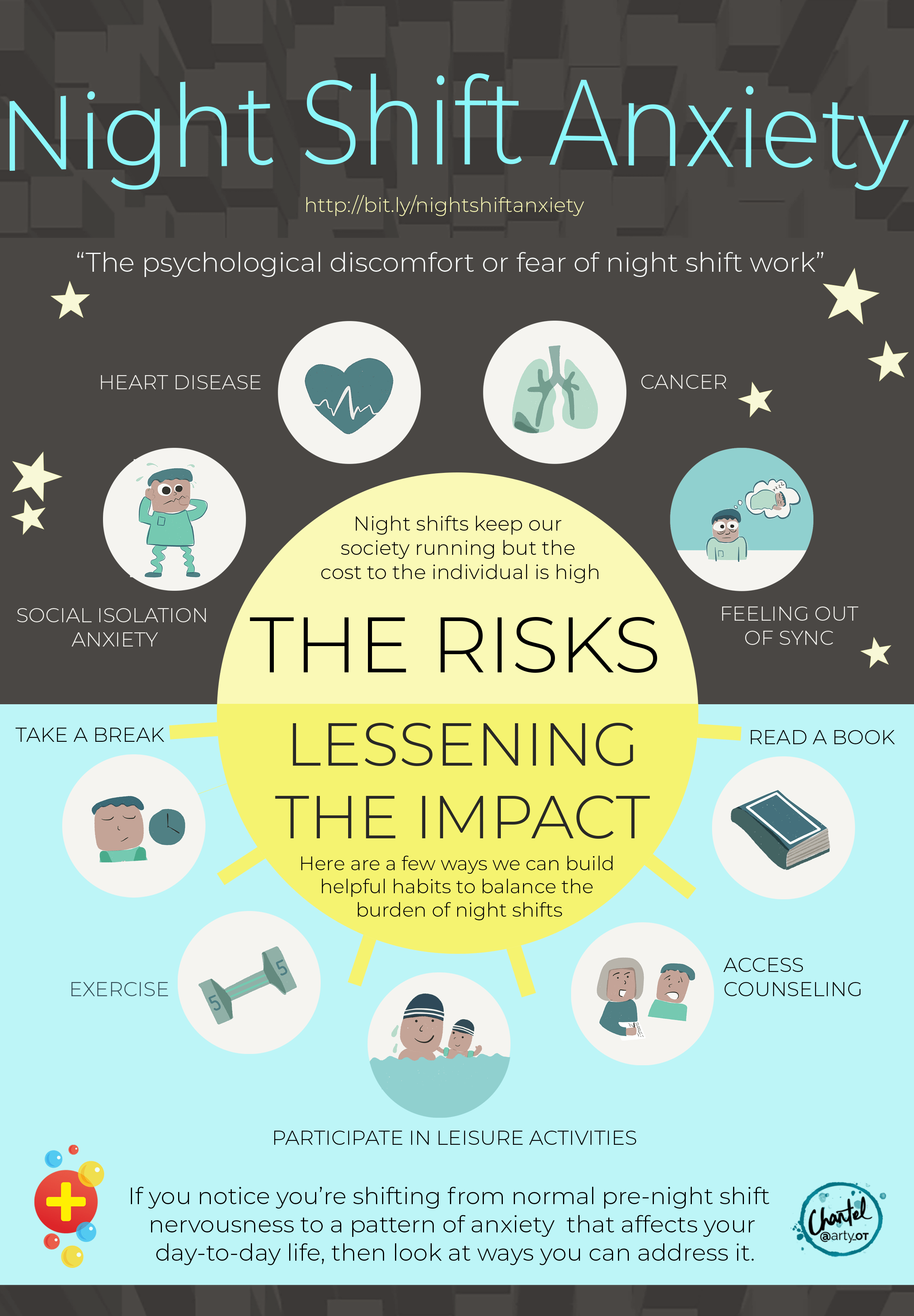