Home > View All > How low can you go: Neonatal hypoglycaemia in the HypoEXIT trial

How low can you go: Neonatal hypoglycaemia in the HypoEXIT trial

You are called to the post-natal wards to review an infant of a diabetic mother. He is Day 1 and has a BSL of 2.4 …

We all agree newborns are sweet, but what is the minimal sweetness we should be accepting? Many of our neonates are monitored for hypoglycaemia after birth, including but not limited to babies of diabetics, small babies, large babies and premature babies. This can represent up to 30% of our neonatal populations. There is no published consensus regarding the threshold blood glucose level at which we should treat asymptomatic hypoglycaemia in neonates.

Many institutions, both in the UK and Australia, are currently using 2.0 mmol/L (36mg/dL) as a cut-off, which is also included in the UK BAPM Guidelines. However, the RCH Guideline (commonly used at many Australian institutions), recommends 2.6 mmol/L (47 mg/dL) as the cut off for treatment. Treatment can include buccal dextrose gel but may be more invasive such as IV glucose infusions and tube feeding.

Part of the reason for the discrepancy was the lack of high-quality evidence surrounding what is “normal” blood sugar during the first hours of life, and what the risks are with accepting a lower threshold. Until now…

What was the study design?

This was a multi-centre, randomised non-inferiority trial. This means patients were randomised into one of the two interventions, and that the analysis plan was to determine that one intervention was no worse than the other.

This was a trial including newborn babies who were high risk for hypoglycaemia, and would normally be routinely screened for low BMs after birth. Babies were included if they were >35 weeks gestation and their birth weight >2000g. Recruited babies were divided according to four groups:

Of note, infants were excluded if they were unwell, had initial severe hypoglycaemia defined as <1.9 mmol/L, congenital abnormalities, or suspected inborn errors of metabolism/congenital hyperinsulinaemia.

Threshold of 2.0 mmol/L (36mg/dL) for intervention for hypoglycaemia

Threshold of 2.6 mmol/L (47 mg/dL) for intervention for hypoglycaemia

The primary outcome was neurodevelopment. The infants were followed for 18 months, with a primary outcome of cognitive and motor development assessed with the Bayley-III-NL scale of infant and toddler development. The lower threshold was considered to be non-inferior if the Bayley score were < 7.5 points lower than the standard threshold for hypoglycaemia group. This reflects a 1-month delay in development, which in the trial protocol, the authors suggest as being a clinically important difference (however there is no explanation as to how this was determined).

The Bayley scale is a developmental assessment tool which was designed to detect developmental delay. It has not been widely validated as for its clinical application, so great caution should be taken with interpreting it as a clinical outcome.

Closer to the time of hypoglycaemia, the secondary outcomes were the number of glucose tests, treatment type (IV, NGT or bottle) and duration of breastfeeding. These are all important patient-orientated outcomes, as they reduce interruption on normal neonatal-maternal bonding and feeding.

How was the data analysed?

The study was designed to have 90% power for the primary outcome in each of the 4 subgroups.

Clinical situations don’t necessarily go according to a script, and management decisions were made based on each individual newborn, making a per-protocol analysis very difficult to complete. The authors therefore only presented an intention-to-treat analysis. This does make it difficult to determine how many infants were actually managed according to their assigned protocol.

Due to there being several scores provided by the Bayley assessment (motor and cognitive), the authors used more stringent confidence intervals (97.5%) to adjust for multiplicity (the increased chance of observing statistically significant differences due to analysing a greater number of results).

All things considered, this was an impressive effort at conducted a high powered study including for subgroup analysis, and with stringent adjustment for multiple outcome testing.

In asymptomatic healthy newborns lower threshold for hypoglycaemia of <2.0mmol/L was non-inferior to standard <2.6mmol/L when comparing psychomotor development at 18 months. This was true across all 4 subgroups 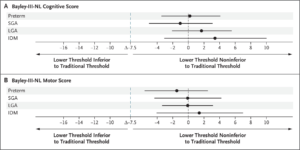 There was a moderate amount of children lost to follow up (15.5%), however, it is uncertain whether this is informative (related to the outcome; neurological development) and would influence the results.

The number of infants of diabetic mothers was lower than predicted, so results for this subgroup should be interpreted with caution (however, despite the wider confidence intervals the limits are well within the non-inferiority margin)

The primary outcome was development at 18 months, and so we can’t say for certain whether any longer-term impacts would be demonstrated. The Bayley score is a crude tool which may miss more subtle developmental problems.

Whilst this is a truly pragmatic, randomised study which reflects current practice at many institutions, the results should not be interpreted beyond their scope – care must be taken in assessing the cause of hypoglycaemia in newborns, and recurrent or severe hypoglycaemia should be managed aggressively, as should hypoglycaemia in children who are unwell or who have comorbidities which make them higher risk (inborn errors of metabolism, congenital hyperinsulinaemia etc).

You check your hospital protocol which suggested it’s safe to only intervene if the baby is otherwise well and BM >2.0. You advise he has another breast feed, and his subsequent BMs are all >3.0. He is discharged the next day.