There is precedent for reaching a tipping point, where outrage finally forces change but the bar just seems unacceptably high for Syria. Two months ago I arrived in a desolate town in East Jordan to take over the field level medical leadership for Médecins Sans Frontières’ response to the humanitarian situation in the Berm on the Jordanian/Syrian border. Eighty thousand people have been trapped between two earthen berms since Jordan tightened and then closed their border on the 21 June when a bomb was detonated that killed seven Jordanian soldiers. Médecins Sans Frontières has not had access to the population since and those trapped have had no health care. They are getting less than half the appropriate amount of water and, since 21 June, have received only one food drop which had to be delivered by crane. 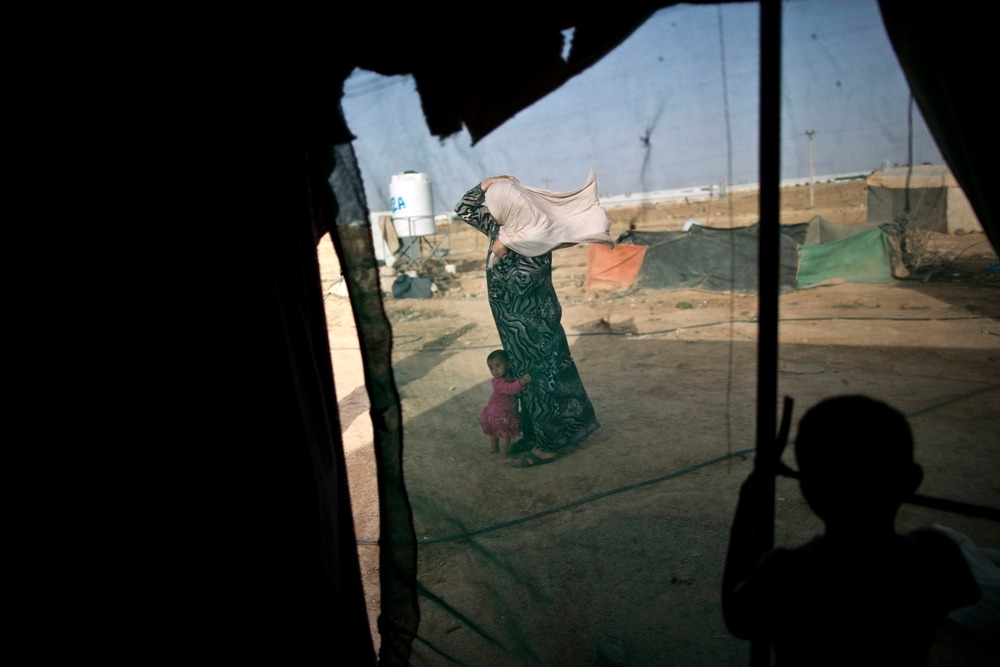 I am the only Médecins Sans Frontières medic based here now and I get difficult questions from people: what do you do all day? What’s the point of being here? When is Médecins Sans Frontières going to leave? Nobody would ask those questions of a person carrying a child out of a burning building, but they ask them of me. I cannot touch my patients, I cannot stitch their wounds, I cannot hang IV fluid or give life-saving antibiotics, I cannot birth their babies or stop them dying in childbirth. I cannot fix the hepatitis outbreak I know has taken hold since Médecins Sans Frontières has not had access. But I can try to make them seen. So I’m going to write about a boy, a hypothetical boy. A boy that might exist in the Berm, but we would never know, because we don’t have access. 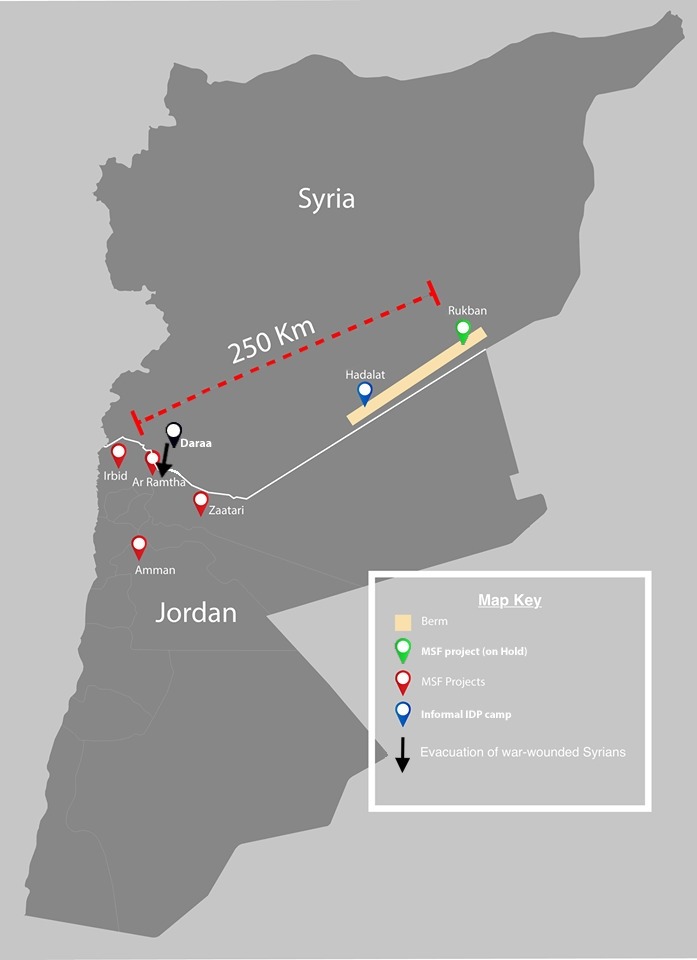 Ibrahim is six years old. He has known no time where conflict was not around him. As such he understands this to be normal life and carries on regardless as kids so often do. He and his family arrived in the Berm in January, running from hunger and terror, hoping to find a place of safety. Ibrahim has a brother, Ali. He is eight and the two of them have a predictable rivalry. In the context of limited play options, games are a variation on chasing each other around and hide-and-seek in the Berm. Ibrahim’s mother is alone. His father was killed in an airstrike, the main precipitant for their flight to the Berm. She struggles with Ibrahim, his brother and her third child: a one-year-old girl. They have very limited resources and used almost everything they had to get to the Berm.

A few days ago, Ibrahim’s mother was cooking soup over an open fire in their tent whilst Ali and Ibrahim were out playing. They darted quickly between the lean-tos and tents in the blistering heat. All his life, Ali had been faster than Ibrahim, but as Ibrahim got older, he was catching up. Their mother called, she got angry easily these days and they didn’t want to agitate her. As they raced back towards the tent, Ibrahim was winning. Ali picked up a rock and called Ibrahim’s name just as he entered the tent and Ibrahim looked back as Ali threw it. Ibrahim continued into the tent at full speed to avoid the rock, tripped over his baby sister and fell into the fire, knocking the boiling pot over his legs. The screaming made Ali unable to go into the tent and he ran and hid. Their mother pulled Ibrahim out of the fire and rolled him on the ground, but it was too late to prevent burns to both of his legs. They didn’t have any water to waste for first aid. Other members of the community came running as Ibrahim carried on screaming. People put some money together to access one of the only nurses available in the camp.  It costs  USD$1 to see the nurse, with any treatment costing more. Even so, there are very limited supplies available. 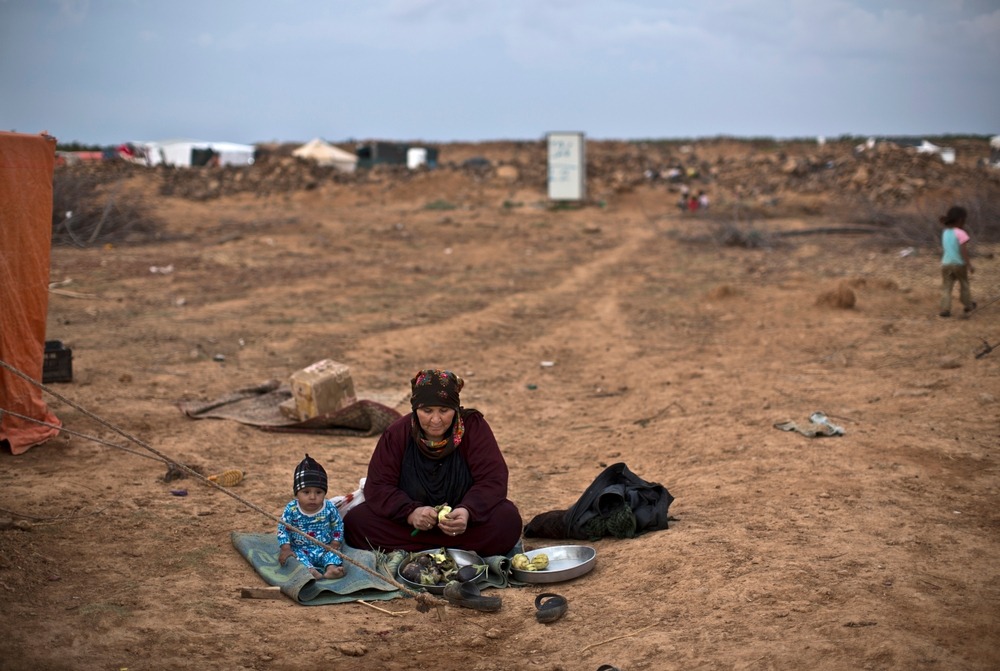 Ibrahim was able to have his legs dressed once and was given one paracetamol tablet. He lies at home now, no one has taken the dressings down; no one knows how bad the burns are. No one took any pictures. No one posted it on social media. No one outside the Berm knows anything about it. Ali and his mother are crippled with guilt, like this is their fault. Ibrahim’s story is apocryphal and I must underline that. But with 80,000 people living the way they are in the Berm, stories like this are happening, we just don’t know about them. We accept this is a very complex political situation, but there is a moral imperative for Médecins Sans Frontières to be granted access to this population. But we also need access to give the world another glimpse of Syria, to build the outrage, to get to the tipping point to change.

If you want to hear more about the challenges of the Berm, come to DFTB17 and listen to Nat speak about her experiences.