It’s 2am and you (the Paeds Reg), are called to the Birth Suite. The expectant mother has been pushing for over an hour and your Obstetric colleague has called for a vacuum after a post-dates induction. The CTG is “a bit iffy” according to the midwife who hands over to you. There has been an otherwise unremarkable antenatal course with normal scans.

You crack on and check the trolley, mentally rehearsing your resus. You talk through the resus plan with your assistant.

It’s clearly a tense situation, and with the third pull, the head is delivered. There’s a minute before the rest of the baby is born, and she comes out looking marbelled, apnoeic, hypotonic and meconium stained. The child is brought to the trolley within 30 seconds of delivery.

You examine the vacuum site. It’s boggy but doesn’t cross the suture lines. You think that it’s a chignon and does not examine as a subgaleal haemorrhage.

The child remains floppy and apnoeic at 8 minutes; the Birth Suite nurse returns with the cord gases, which show:

A few minutes later, the child begins to breath spontaneously, at a rate of 80-90, with plenty of work.

This looks like hypoxic ischaemic encephalopathy. What is HIE?

Hypoxic-ischaemic encephalopathy is just that; the injury to the nervous system as a result of a hypoxic and consequent ischaemic event. The injury to nerves occurs in three phases, latent (30 mins to 6-12 hrs), secondary (6-12 hrs to 72 hrs) and tertiary (72 hrs+). During the latent phase, hypoxia and subsequent reperfusion has triggered cell death via apoptosis & other mechanisms, concurrently, oxidative stress, inflammation and excitotoxicity lead to

After the first draft of this article, a succinct review was published in JAMA Pediatrics; I’ve adapted their figure. 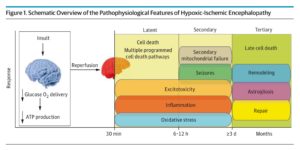 Most departments will have a protocol around cooling for HIE. There’re a few links below to guidelines for particular hospitals/areas, each with slightly varying details around particular parameters. Here in Queensland, our guideline is freely available online, and was the basis for a ‘rough & ready’ cognitive framework (and mnemonic) I use in a resus situation to trigger the consideration of cooling;

As per Sarnat below, but a child may be clearly encephalopathic during the resuscitation.

Notably, for most of the unit protocols I’ve seen, there are additional inclusion and exclusion criteria that must be filled to identify the child as appropriate for cooling; the above is a strictly cognitive framework to trigger the thought about HIE & cooling.

Additional criteria include a minimum weight limit, no severe congenital abnormality and that the infant not be moribund and with plans for full care. These are based on the large trial data, as discussed below. Some infants might be very close to fitting the facility’s criteria; it’s very reasonable to discuss the child with the tertiary neonatologist on call if you’re not sure. There’s limited data below the ages and weights described, but the intervention may still be appropriate.

The first published Staging system for hypoxic-ischaemic encephalopathy was produced by Western Australian duo Sarnat & Sarnat in 1976. The introduction is particularly elegantly written; the whole paper merits a read. Particularly, in their initial publication, that more than half of the neonates in the series had ‘Stage 2’ encephalopathy at birth; that is, they fit the criteria above. 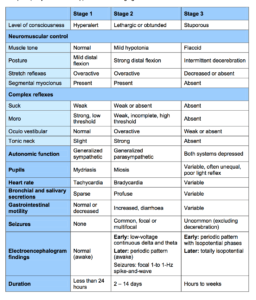 You’ve called for your consultant; this is a baby needing senior review.

So, what happens next?

You discuss the baby with tertiary centre for retrieval & consideration of cooling. The neonatologist advises to turn off the overhead heater. … Part 2.