A 2-year-old girl, Amy, attends the emergency department. Her father says that for the last 24 hours she has been refusing to walk. Prior to this, she was running amuck without difficulty. In the ED, you notice that she is now having difficulty crawling. She has no significant medical history but did have fever along with a runny nose and cough 2 weeks prior to her attendance which her parents managed with paracetamol at home.

What is Guillain-Barré Syndrome?

Guillain-Barré Syndrome (GBS) is a group of acute immune-mediated polyneuropathies.  It most commonly presents as an acute monophasic, paralyzing illness provoked by a preceding infection.

It is the most common cause of acute flaccid paralysis in children. The annual incidence is 0.34 to 1.34 cases per 100,000 in under the 18s, which makes it less common in children than in adults. It rarely occurs in children younger than 2 years, but when it does affect younger children because GBS is way off our radars, this can make it really tricky to diagnose. Boys are affected more often than girls.

It’s thought that an immune response cross-reacts with the myelin or axon of peripheral nerves due to molecular mimicry. Similar peptide sequences between the body’s own peptides and foreign peptides sometimes cause the immune system to get confused and attack its own tissues.  You probably knew that myasthenia gravis is due to auto-antibodies against the acetylcholine receptor but did you know that the receptor shares a 7 amino acid sequence with HSV, the herpes simplex virus? It’s thought that exposure to HSV may be the precipitant for myasthenia gravis.

Approximate 2/3 of patients give a history of an antecedent respiratory tract or GI infection. Campylobacter infection is the most commonly identified precipitant and can be demonstrated in as many as 30% of cases. Other infectious precipitants include CMV, EBV, Mycoplasma pneumoniae, and influenza-like illnesses.

Other suggested triggers include immunization, although there is no clear causal relationship several cases suggest an association, as well as one with trauma and surgery.

What about Guillain Barre and COVID?

There have been several case studies reporting GBS associated with SARS-CoV-2 during the COVID-19 pandemic. Given the small number of cases, it is unclear whether severe neurological deficits are typical features of COVID-19 associated GBS. An answer to the diagnostic conundrum of whether the respiratory compromise in COVID19-associated-GBS is due to coronavirus or muscle weakness is yet to be answered.

How can I recognize it?

GBS classically begins with paraesthesia in the extremities – fingers and toes –  followed by lower extremity symmetric, or modestly asymmetric, weakness that ascends up the body. In severe cases, the muscles of respiration are affected, in about 10-20% of children. 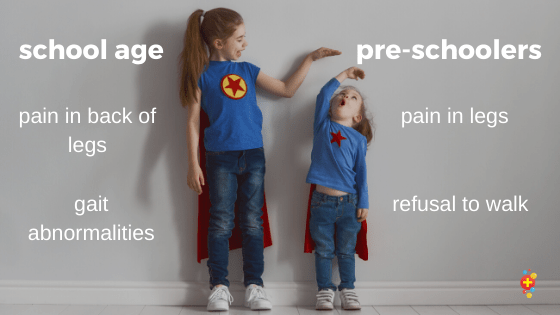 Generally, children have shorter clinical courses and more complete recoveries in comparison to adults. A child’s function typically deteriorates for 2-4 weeks followed by a slow return of function over the coming weeks to months.

On examination, you find a quiet child who is otherwise acting appropriately. She is afebrile and the rest of her vitals are within normal limits. No bruises or rashes are observed on her skin and there is no evidence of trauma. Cardiovascular, respiratory, abdominal and ENT exams are unremarkable. Her extremities are warm and well perfused with normal pulses. There is no bony tenderness or deformities on palpation of her limbs. On neurological examination, she is moving all 4 limbs spontaneously. However, she will not bear weight or stand. Both her lower limbs are weak on exam. Her grip strength is reduced and when given a toy, it falls. Both upper and lower extremity reflexes are absent.

GBS most commonly presents in the classical way above: a mixed motor and sensory polyneuropathy with lower limb pain and ascending weakness. This is the classic Acute Inflammatory Demyelinating  Polyradiculopathy (AIDP), which accounts for 85 to 90% of cases in the developed world. But, there are a few other subtypes of GBS you should be aware of.

Acute Motor Axonal Neuropathy (AMAN), is a purely motor from of GBS, occurring mainly in Asia, Central and South America and associated with a preceding Campylobacter infection. Its clinical features are similar to AIDP, but respiratory failure is more common.

Acute Motor-Sensory Axonal Neuropathy (AMSAN) is similar to AMAN but with more sensory symptoms. The course tends to be prolonged and severe but is pretty uncommon in children.

Miller-Fisher syndrome is characterized by an external ophthalmoplegia, ataxia and muscle weakness with areflexia. It affects adults more commonly than children but should definitely be on your radar in a child presenting with cranial nerve and lower limb neurology.

How can it be diagnosed?

The initial diagnosis of GBS is based on the history and clinical exam – be suspicious of a child with lower limb weakness, weak reflexes and a preceding illness. Use investigations to confirm your suspicion.

MRI will show contrast enhancement of the spinal nerve roots, cauda equina or cranial nerve roots. These changes aren’t specific to the GBS, but can be helpful in the correct clinical setting.

This is the most specific and sensitive test available for GBS, abnormal in up to 90% of cases. The test can be technically difficult in small children.

Antibodies against GQ1b (the ganglioside component of a nerve) are present in the vast majority of patients with Miller-Fisher syndrome.

In the emergency department, you send baseline bloods (FBC, U&E, LFTs and CRP) which are all normal and organize a CT head under sedation which is unremarkable. After getting consent from her parents you perform a lumbar puncture. The CSF appears clear. It has no red blood cells, 2 white blood cells and CSF glucose is within the normal limits but her protein is mildly elevated. No organisms were seen on gram stain and cultures had no growth after 5-days. You refer her to the neurology team for further investigation.

What else could it be?

The differential diagnosis of GBS is long.

What is the treatment?

The mainstay of treatment is supportive management including close monitoring of motor, autonomic and respiratory function as well as pain management and prevention of immobility complications, such as pressure ulcers. ICU admission for mechanical ventilation will be required in 10-20% of kids. This is more likely to be needed in children with:

Plasmapheresis can be useful in bigger children where technically it is more feasible to perform. However, there are no reliable studies to suggest one has better efficacy than the other in children.

During her admission, Amy has a Gadolinium-enhanced MRI of the spine and nerve conduction studies which are consistent with the acute inflammatory demyelinating polyradiculopathy (ADIP) subtype of GBS. She is given IVIG. She does not develop any respiratory complications. On discharge after three weeks, her weakness is greatly improved and completely resolves over the next two months.