A question from the paediatric intensivist reaches me via the registrar. ‘Does this normal array result exclude 22q11.2 deletion?’ “Yes!” I say emphatically, delighted to finally have a definitive answer to a genetic question. Genetic investigations are so full of caveats and uncertainty, and very rarely able to exclude anything, that I relish standing on a small island of certainty.

That our esteemed colleagues are wrapping their heads around chromosome microarray results a decade after arrays became mainstream makes a lesson on genomic testing all the more pressing. Why? Because, despite being in the midst of a devastating global pandemic caused by a maleficent 29,844 base pairs of RNA, the genomic revolution has arrived and our patients stand to benefit.

Who Can Order Genomic Sequencing?

For the Australians in the audience, a Medicare item for genomic sequencing has been released on 1st May 2020. Whole exome sequencing, known as WES (think Wes Anderson), and whole-genome sequencing (WGS), are now government funded for children 10 and under with:

Genomic sequencing can now be ordered by a paediatrician in conjunction with a clinical geneticist. What this ‘in conjunction’ will look like will vary depending on service, but the goal is to usher in a safe adoption of this powerful diagnostic technology.

Not to stoke inter-hemispheric rivalry, but the Australian approach lags behind the UK, who for years have had a co-ordinated and mainstreamed approach to genomic testing, first through the Deciphering Developmental Disorders study and now the 100,000 genomes project. The NHS has implemented an excellent genomics education program for clinicians and patients alike.

The Burden of Genetic Disorders

Whilst individually rare, the combined incidence of rare diseases is common, estimated to affect approximately 8% of the Australian and UK populations, with the vast majority being genetic in origin. These numbers are similar to the proportion of people living with diabetes or asthma. Children with rare diseases have disproportionate representation in the emergency department, NICU, PICU, general and developmental paediatrics clinics, often with the input of many paediatric subspecialists. In years past, many of these individuals were thoroughly reviewed by clinical geneticists, occasionally received a diagnosis, often after many years, but the majority remained undiagnosed, occasionally adopting the moniker of a syndrome without a name (SWAN).

Our genome, the instructions that make us who we are, is in almost every cell in our body (enucleated red blood cells are a notable exception). These instructions, coded via 3 billion base pairs of DNA, are tightly packaged into chromosomes. Typically, a person has 46 chromosomes, 1 to 22 (longest to shortest, in theory, but not quite) and the sex chromosomes, XX or XY. Genes, the individual recipes for proteins and enzymes, are spaced out irregularly along the chromosomes, akin to legible sentences in a sea of lorum ipsum. 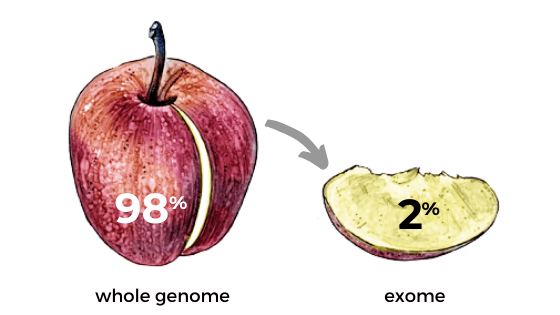 Adapted from University of Washington

Remarkably, the approximately 20,000 genes that humans have make up only 2% of the whole genome. WES sequences only the 2% slice of the apple, whereas WGS sequences the whole darned apple. Sequencing the whole apple achieves better coverage of the 2%, detects structural rearrangements, and has a 5 to 10% higher diagnostic yield than WES. Irrespective of what is sequenced, the bulk of the analysis remains focused on the 2%. Whilst tempting to order WGS as a first-line test, in Australia at least, there are very limited places that have access to WGS through public laboratories.

Only 1 out of 4 of all human genes are currently known to be associated with health conditions. The remaining 3 out of 4 genes may have pathophysiological associations yet to be discovered, or be the genetic equivalent of a gastrointestinal appendix. Genes can be disrupted in many ways, making them inactive, overactive, or just a general nuisance by interfering with normal functioning proteins. These disruptions can happen at different levels. 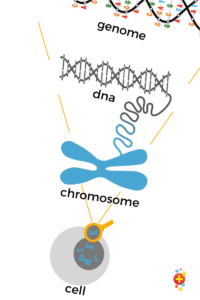 At the level of the chromosome, whole genes can be deleted or duplicated. Systematically arranged photographs of chromosomes taken under a microscope were revolutionary when they arrived over 50 years ago. Known as karyotypes, this was the first test able to detect imbalances in chromosomal material. Generally, these imbalances contained dozens, if not hundreds, of genes.  Current day equivalents, chromosome microarrays, offer much of what a karyotype does, but at a far higher resolution (think several orders of magnitude), often being able to detect single gene deletions or duplications. Chromosome microarrays have approximately a 10 to 15% diagnostic yield as a first pass test for multiple congenital anomalies or developmental delay and should always be the first test ordered for these presentations. Fragile X testing should also always be ordered for children of either sex presenting with developmental delay, as it remains the most common inherited form of intellectual disability.

What microarrays do not do, is get down to the level of reading every single letter of every single gene, looking for a spelling mistake. That is what genomic sequencing does. Diagnostic yield of WES varies from paper to paper, but is somewhere between 35 and 60%, depending on a multitude of factors, slightly higher for WGS.

Beyond one vial of blood in an EDTA tube, and lots of waiting, what’s involved? Consent. Consent. Consent. And then some. Educational videos on genomic consent can be found here and here. A large focus of consent is on managing patient expectations about potential outcomes, raising the possibility of identifying non-familial relationships (think non-paternity), incidental genetic findings, and an exploration of implications for life and income protection insurance. A thorough consent means that a proportion of families will elect not to go ahead with testing.

Ok. So, you either find the diagnosis, or you don’t, right? Not entirely.

Due to natural variation, on average, each of us has 3 million base pairs that vary from the reference genome. Which of these 3 million variants is the culprit? Bioinformatics filtering removes the bulk of variants, but at the end of the residual list of variants is a very human curation effort, with scientists and genetic pathologist intently scrutinising, often for hours, variants for their pathogenicity.

Parents frequently view a genetic diagnosis as precise and unequivocal and can be perplexed by vague and uncertain interpretations of results. Imagine, for example, if all our genes were cake recipes. Our task is to compare them to a giant Martha Stewart reference compendium. WES is able to identify each time a recipe varies from the Martha Stewart original but does not have the capability to bake that cake, to see what the effect of the new recipe is. Some changes are obvious. If the new recipe stops at ‘preheat the oven’, substitutes sugar with salt, or asks for vibranium, clearly there is no cake to be had. But what about subtle changes? Can sugar be substituted by honey? Can you double the chocolate (umm…yes!)? The latter constitute a group of variants known as variants of uncertain significance (VUS) and need to be considered with caution.

Genomic testing can be either singleton or trio.  Singleton sequences only the child’s DNA. Trio sequencing achieves a higher diagnostic yield by analyzing the child’s and parental DNA together. This ability to segregate variants in real-time substantially reduces the number of red herrings or the risk of throwing the proverbial baby out with the bioinformatic bathwater.

So the potential outcomes are:

Is it worth it?

Information is a vital tool for empowering patients and the value of a molecular diagnosis is hard to quantify. An early genetic diagnosis demonstrably reduces the burden of costly and often invasive investigations a child typically undergoes during their diagnostic odyssey. Some tertiary institutes may be able to offer ultra-rapid genomic testing, with turnaround times of days, for children in acute care settings, such as the NICU or PICU. Direct changes in management are rare, but when they do occur, can be transformative: such as novel therapies for achondroplasia or life-prolonging antisense oligonucleotides for spinal muscular atrophy (admittedly two genetic conditions which are diagnosed on clinical grounds, not genomic testing). Even without a disease-specific change in management, families perceive significantly reduced barriers to coordinated care and funding once a diagnosis is made. Disease-specific patient organizations, often hosted on social media platforms, can be a vital source of support and information for families already at risk of significant social isolation.

However, a diagnosis is no panacea. With the majority of families pursuing testing in a desire to anticipate a child’s future potential complications and life expectancy, thanks to an increasing number of ultra-rare conditions, this effort at prognostication often fall short. One parent eloquently describes it as finally receiving the last piece of the puzzle, yet the picture on the puzzle remains blank. If your child is the 7th in the world with a condition, there is little that can be gleaned with certainty from the other n=6. Even for well-characterized conditions, there is an increasing awareness of phenotypic expansion, as children at the milder end of the spectrum are diagnosed through genetic tests rather than the prototypic collection of features previously required to secure a diagnosis. Yet thanks to this space of uncertainty, there is room for genuine hope, with the very real possibility that a child proves the textbooks wrong and exceeds all expectations.

For those that remain undiagnosed, there are more tests on the horizon. In the meantime, be bold, be brave, and know that there is a more powerful test to offer your patients and that clinical geneticists have your back. And that patient who didn’t have 22q11.2 deletion? His WES is in progress.

The Voice of Rare Disease Patients in Europe: https://www.eurordis.org/

A recent publication about limitations of WES: https://pubmed.ncbi.nlm.nih.gov/32190976/