How did we feel when we were told to ‘Forget the bubbles’ and infection control policies binned those slippery soapy solutions and golden rings of plastic? COVID-19 led to innovations in the workplace and we changed practice almost overnight to ensure the safest care was being delivered to our patients. Perhaps the team that demonstrated this to the fullest are the play specialists.

A chat with Maxine Ovens, Play Service Manager at the Royal Brompton Hospital showcased stories of innovation coupled with cycles of constant evolution as the team adjusted to a different way of life. Before COVID-19, Maxine had been the playroom boss for 16 years. She startied with a team of just 2 and is now running a 7-day service with 9 team members.

They have been working on the ward, and in children’s outpatients, supporting not just children and young people, but also their families, ‘to make their hospital experience positive and productive’. During the initial surge of the pandemic, PICU beds at the Royal Brompton were allotted to adult ITU services. The playroom on the children’s ward became the storeroom for paediatric equipment as the original storeroom now fell in the ‘red zone’. Play had to be put back on the shelf and staff redeployed. Maxine’s aim was to ‘stay as a team and not be broken up during these difficult times’. The play specialists volunteered at the donning and doffing station at the PICU and actively engaged in boosting staff morale. 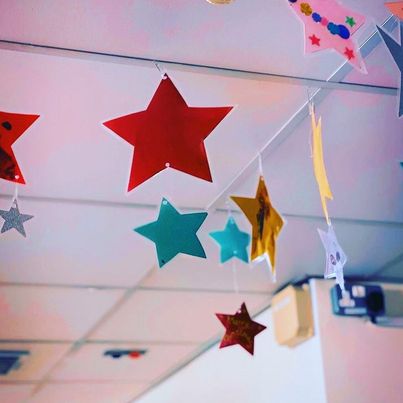 Behind the scenes, Maxine continued to push for restoring the playroom services. Working closely with the Infection Control team, she drafted new ‘playroom guidelines’ keeping with national policies and social distancing norms. With relatively fewer admissions, Maxine could arrange for one-to-one play sessions for everyone. These were time-tabled on a daily basis by the play team. The main focus was on the daily cleaning schedule with particular members allotted to be in-charge. All surfaces and toys were cleaned with Chloro-clean solution at the beginning of the day and in between play sessions. All members maintained the daily cleaning logs strictly, signing out for toys used in each session and putting them back after a thorough clean. ‘This was not just to demonstrate to Infection Control that the playroom is hazard-free, but also to reassure parents and carers that it is safe for the children.’ The staff were commended by parents for the clean environment of the playroom. One parent mentioned that ‘such varied activities were not possible even at home with all the recommended hygiene measures’.  And Maxine would quietly remind us of the marathon clean up the team had to do when a young patient decided to start a bit of ‘slime fight’ during a slime time session. Children on respiratory support had their playroom time towards the end of the day. Aerosol generating procedures required the playroom to be closed for an hour after.

Toys and playthings have to be compliant with the new cleaning regime. Staff members laminated books for bed-time stories before cleaning and returning them every day. The Brompton Fountain Charity donated single-use activity packs and colouring sets. Cardboard boxes for the board games were discarded, and playing cards were laminated and stored in plastic containers. All effort was made to ensure traditional play tools were not missed in this ‘new normal’. And, of course, plastic bubble machines appeared on the shelves to replace the old stand by.

Play is about innovation. Just as children grow and learn to explore their environment through play, Maxine and her team invented Covid-safe ‘things to do’. Group play was put on hold. The team used this opportunity to engage more children in one-to-one sessions, exploring their unique ideas. When admission rates started picking up, ‘bay bubbles’ were created so that two children from the same bay could be in the playroom together, using time and space more effectively. Children were engaged in activities like biscuit icing so that they could keep their creations for themselves rather than handing over the products of their labour for cleaning. Over the Christmas period, children made decorations which were then laminated by the team and hung on the ward. 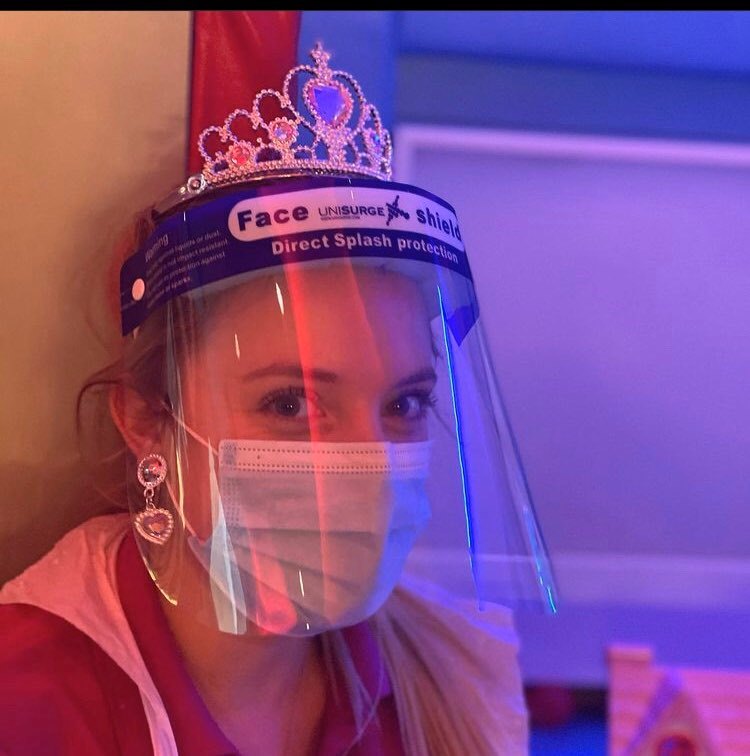 But to Maxine, the biggest challenge was the PPE. During bedside sessions, the team had to adhere to guidelines which made play a little more clinical than they would like. Visors were donned with cut-out tiaras and Mickey Mouse ears. Badges were pinned to uniforms bearing the photo of team members. The smile behind the mask had to be seen. There were picture books of health care staff in PPE explaining to children the new ‘superhero costumes’. The play team helped prepare the young patients for a procedure before junior doctors walked in donned.

So, what does hospital play look like now? Her team has always been creative with new and innovative ideas catering to the varied interests and abilities of her young patients. They have been constantly evolving as a team and will continue to do so.

‘Take every opportunity to be creative and be flexible. Play doesn’t need to stop. Fight for your service and work closely with the teams that can support you. After all, we all need a little play in our lives.’

4 thoughts on “Forget the Bubbles? Never”