Home > View All > Ears looking at you, kid

Ears looking at you, kid

Earache is a leading cause of grumpiness in children.  A recent paper in the New England Journal of Medicine has suggested that a 10 day course of antibiotics is more effective than a 5 day course in treating acute otitis media and, as such, should be considered in infants under 2 years with otitis media. But is this right?

Before we dive into the nitty-gritty it is worth taking a look at the paper and forming your own impressions.

Let’s start with the basics first.  Here is their PICO…

Population – Children between 6 to 23 months of age, who had received at least two doses of conjugate pneumococcal vaccine and who were diagnosed with acute otitis media.

Comparator – 5 days of amoxicillin-clavulanate followed by 5 days of placebo.

Outcome – rates of clinical response based on signs and symptoms

At first glance this seems pretty reasonable but the premise of this study is all about treatment of acute otitis media (AOM).  Most guidelines would suggest that the antibiotic of choice is a weight based regime of amoxicillin (15mg/kg/dose tds) with co-amoxiclav for rescue therapy, not first line.

How do they diagnose AOM?

The investigators made the diagnosis on the basis of three criteria:-

I see children with earache almost every day in the emergency department but I very rarely make the diagnosis of acute otitis media and had never heard of the AOM-SOS.

What is on the AOM-SOS?

The seven item scale is rated by the parents and consists of the following:

Each item is rated as none (0), “a little” (1) or “a lot” (2), giving a score ranging from 0 to 14. The average score, prior to treatment, was around 8±3. Fever, earache and crying was seen in 90% of children with AOM but also 72% of kids without it in one prospective survey. A Costa Rican trial (primarily looking at efficacy of an antibiotic) found no correlation between AOM-SOS and bacterial persistence as determined by tympanocentesis.

How did they determine the presence of a middle ear effusion?

All of the doctors underwent an otoscopic validation program prior to beginning the study.

But I had more quibbles about the final diagnostic criteria. Whilst moderate or marked bulging may be clinically obvious slight bulging and earache or slight bulging with a red TM will occur in practically any crying child.  The AAP suggest that the diagnosis of AOM should be confirmed with pneumatic otoscopy ± tympanometry. The suggestion of tympanocentesis in the presence of an effusion seems a little too hardcore. Just looking at a tympanic membrane in a grizzly 18 month old can be challenge.

Was the PICO clearly stated? – YES (See above)

Was the assignment to treatments randomized? – YES – Children were stratified according to age then block randomized.

Were all the subjects enrolled accounted for? – YES

Were they analysed in the groups to which they were randomized? – YES – the trial was set up as a non-inferiority trial and data examined using the intention-to-treat principle.

Were the subjects and clinicians adequately blinded? – YES

Aside from the treatment were the groups treated equally? – YES

Were the groups similar at the start of the trial? – YES

Do these results apply to my patients? – And that’s the crux, isn’t it?

Parents were contacted by phone on day 4, 5, or 6 and were seen at an end of treatment visit at day 12,13 or 14. The parents also recorded daily  AOM-SOS scores. Clinical failure (what we really care about) was defined as either:

And the results? Drum roll please……..

Clinical failure of treatment was seen in 77 of 229 (33%) children treated with the 5 day course and 39 of 238 (16%) those treated with the 10 day course. This works out as a number needed to treat of 6 to prevent treatment failure. The largest treatment effect was seen with those children who were more unwell at the outset and this was on the basis of fever and perceived pain.  In the authors own words, “…we did not find interactions between treatment and other indexes of severity, namely AOM-SOS scores, infection in both ears versus one ear, and degrees of tympanic membrane bulging.” There was no significant difference in symptom scores between the two groups from day 6 to day 14. There then seems, to me at least, to be a degree of data dredging to show a statistically significant (P=0.003) reduction in symptom scores between the two groups.

There was no significant difference in the rates of adverse events or recurrence of disease.

With the increased uptake of vaccination against pneumococcus and H. Influenza there has been a decreased incidence of bacterial causes of otitis. The organisms commonly implicated are S. pneumonia, H. influenza and M. Catarrhalis. Here’s how often these are recovered from middle ear fluid. 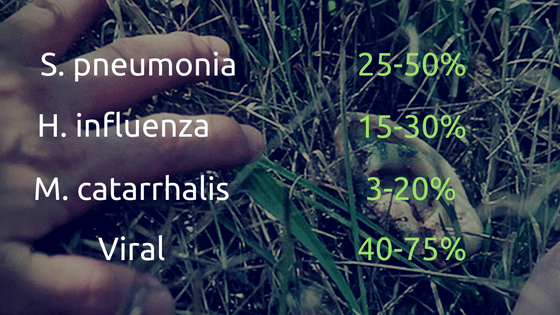 It can be much harder to assess young children and so parental impressions are often used as surrogate markers of treatment success or failure. A number of studies have suggested that antibiotics may reduce persistent symptoms but seem to have little effect on fever or duration of crying. I’ll save my opinions on treating fevers for another time.

I don’t routinely prescribe antibiotics for acute otitis media though occasionally will use a ‘watchful waiting’ approach and this seems to be pretty commonplace in Europe. The AAP suggests that this is an option in children under two years of age with non-severe illness or an equivocal diagnosis. Here is the summary of the 2015 Cochrane data. 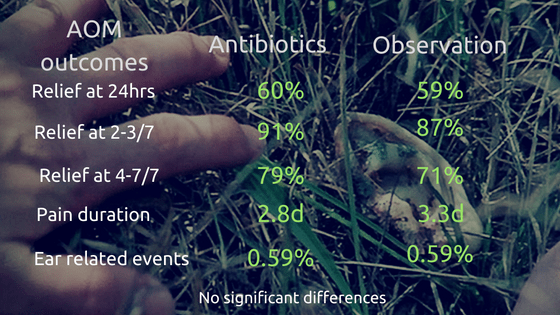 The 2013 update to the AAP guidelines is a little more prescriptive suggesting that antibiotics should be prescribed in cases of severe AOM or bilateral AOM, as it is here where the evidence is strongest for benefit. If the AOM is unilateral and not severe then the watchful waiting approach is appropriate.

Are antibiotics a benign treatment?

What about the economic burden of treatment?

The American Academy of Pediatrics estimated that the direct cost of treating AOM (in 1995) was $1.96 billion dollars with indirect costs adding a further $1.02 billion dollars. The cost to the individual can range from between $10 and $100 dollars. The 2015 Cochrane review stated that a whopping 95% cases in the US are treated with antibiotics. An article in press in the Journal of Paediatrics by Youngster et al looking at trends in antibiotic use in children across a number of industrialized countries reveals wide practice variation with a 7.5 times difference in prescribing rates between some countries, with the US not being the worst offender.

When clinicians utilized a ‘wait-and-see’ approach 63% of parents didn’t even fill their scripts and there was no difference in fever, otalgia or unscheduled visits.

Were there any potential conflicts of interest?

It’s always worth looking at the fine print. The lead author holds a patent related to the development of a version of co-amoxiclav.  Would it be unfair of me to state that this might be perceived as a major COI?

I would have loved to see a third arm in this study – the ten-day placebo arm. The lead author has done a study comparing 10 days of antibiotics versus placebo and found no statistically significant difference between the two groups in terms of symptom resolution. With almost 1 in 3 children suffering from at least one adverse effect from antibiotics there was a great opportunity to look at the effectiveness of the antibiotics. If we take the results at face value the authors suggest we would have to treat six children with a 10 day course of co-amoxiclav to lessen clinical failure but that two of these six will suffer from diarrhoea and dermatitis.

In treating with antibiotics we really need to consider what our goal is. There seems to be no difference in long-term adverse events if a child receives antibiotics or not and only marginal benefit if they do (perhaps a day less of ear related symptoms) but quite a high risk of the systemic effects of the antibiotics. I use a shared decision-making approach with the parents in these cases…

“We can prescribe antibiotics for little Timmy’s earache. If it is a bacterial infection there is a one in six chance, the roll of a die, that he will have one day less of symptoms such as pain, but there is also almost a one in three chance we will give him diarrhoea and a nappy rash.”

Thanks to Sarah McNab for correcting my original statistics and coming up with a great way to frame the discussion. If  1 in 6 are better with antibiotics, and 2 in 3 get no diarrhoea then 2/18 or 1/9 will have a reduction in ear pain and no diarrhoea.

All of this is on the proviso that I am dealing with a routine patient. Certain subgroups such as the indigenous population are much more at risk from serious adverse events and need to be considered differently. Up to 73% of indigenous children under 12 months of age have suffered from AOM and its complications.

Yould should also take a gander at Rory Spiegel’s critique on EMCrit – The Case of the Otalgic Squire.

4 thoughts on “Ears looking at you, kid”