Perhaps you’ve been introduced to FOAMed and have dipped a toe into the land of Twitter but until now have been hesitant about joining in… here are some top tips from the DFTB Team to help you on your Twitter journey at the upcoming conference and beyond! 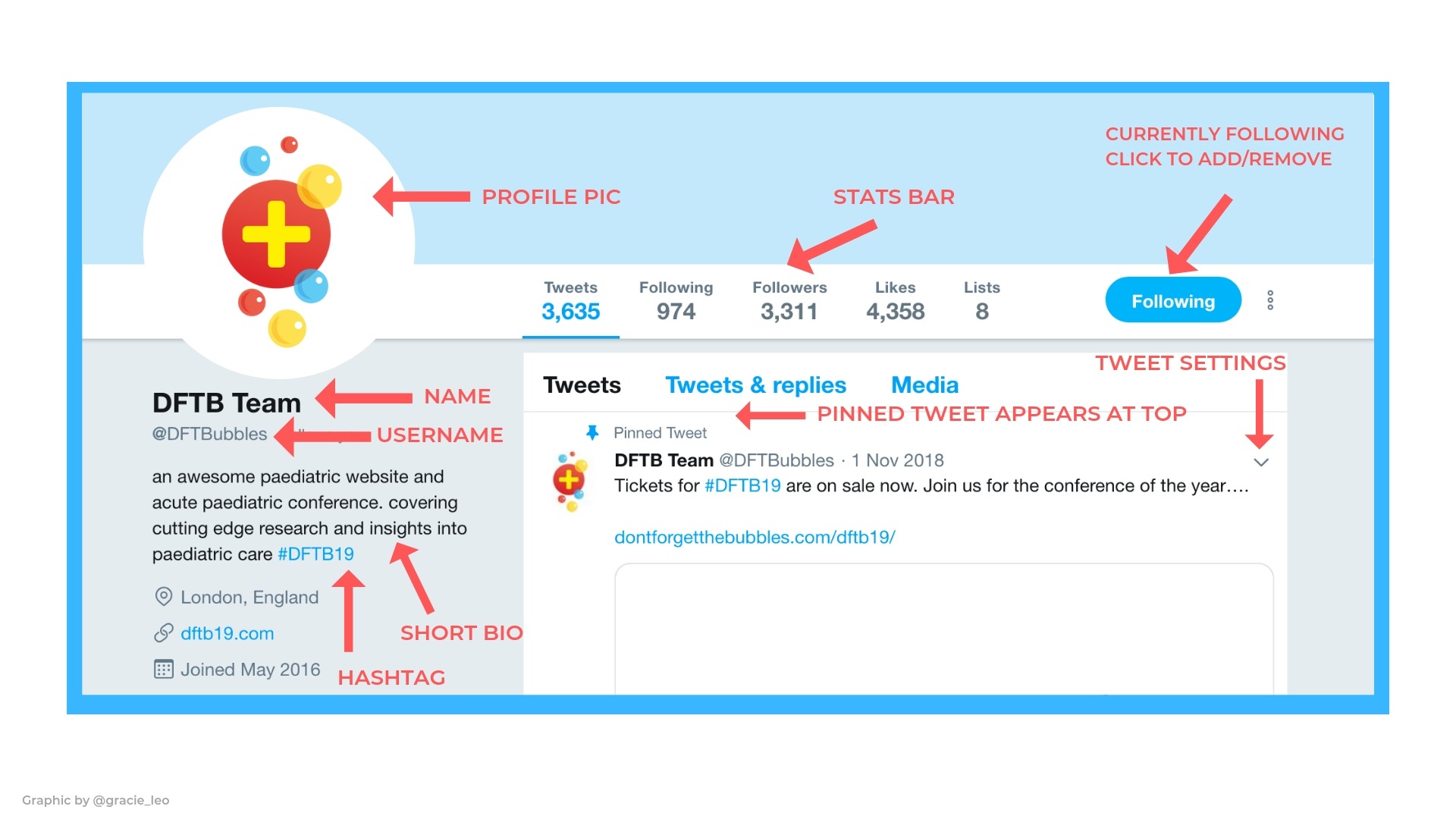 1. Create a username that will last

Remember that your username will be how people tag you in conversations as well as search for you. A good username choice should be easily identifiable as well as appropriate for long term use, taking to account not just your current role, but roles you may have in the future (for example a username based in being a student will likely need to be changed once you graduate). Similarly, if possible, try to avoid using your year of birth or the current year as this will easily ‘date’. Be aware that unusual spelling, multiple special characters and substituting numbers for letters (such as zero for o) may also make it harder for people to type and search for your name to interact with you on twitter via tagging.

Choose a profile picture that is easily identifiable as a thumbnail. For this reason, if using a photograph of yourself; headshots are preferable. Add a short bio which details your background and something about you. If you are looking to use twitter for more professional or academic purposes, consider including key hashtags that you follow or are involved with. Twitter bios feed into the search capabilities of the search tool.

If you’re joining Twitter as part of a conference or as part of medical education; it is often helpful to introduce yourself or have a colleague or friend who is on Twitter to make some introductions. Following key hashtags and following users whose content you enjoy or like can be a good starting point to help Twitter create a feed of interesting content for you to access. See below for some of our suggested friends for first steps on Twitter:

Please note there are plenty more wonderful individuals and groups to meet on twitter so this list is not exhaustive. Feel free to add your comments below of others you would recommend 🙂

Now that you’ve set up your account and started to link in with others; let’s delve into what you might actually start composing. 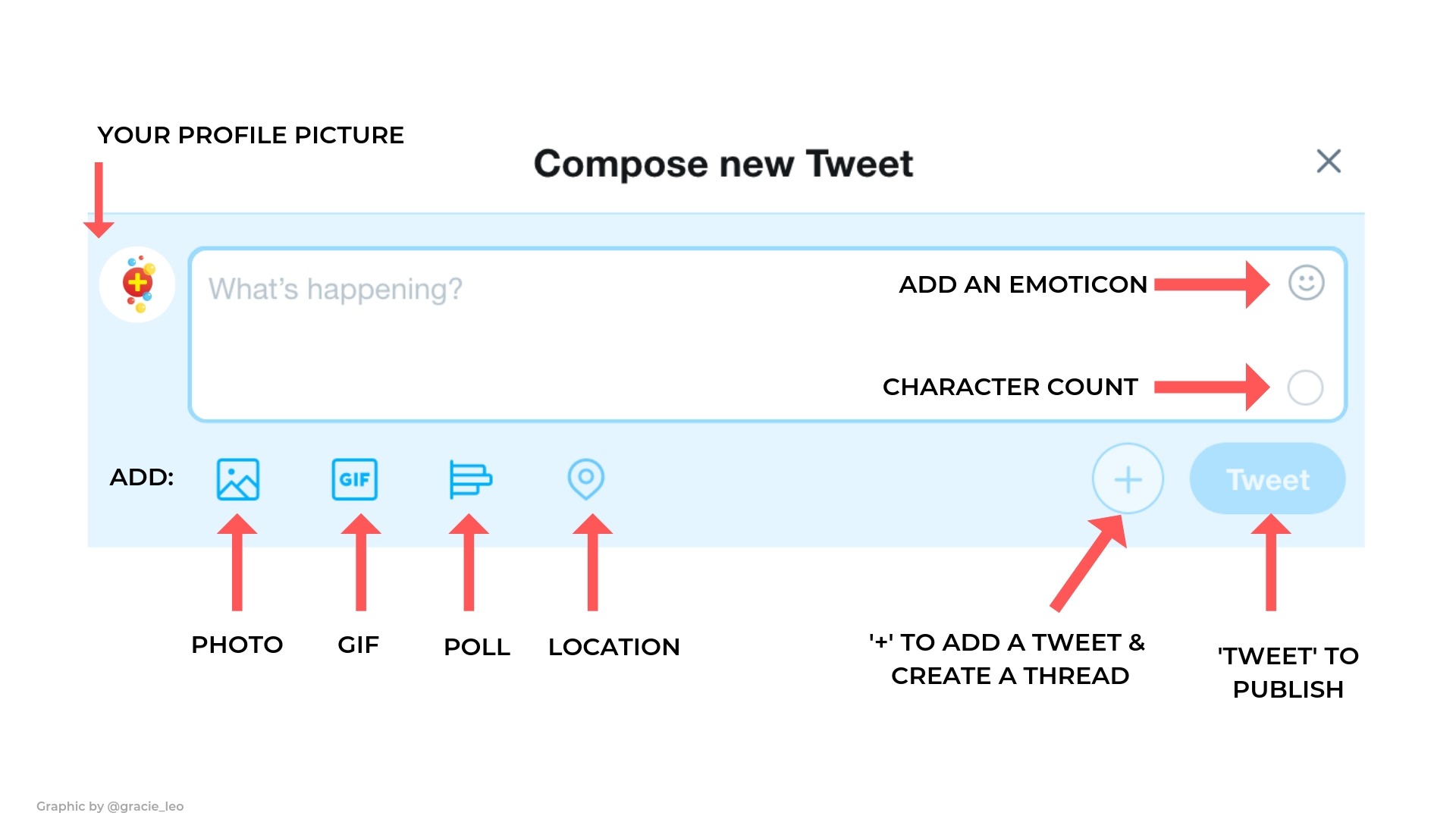 Brevity is the soul of wit and much can be said within a tweet’s 280 characters but if you are feeling the squeeze or have a longer discussion that you’d like to make you can use common abbreviations or create a thread.

@ -> Mention/used to tag a username
# -> Hashtag- used as a prefix and a way to identify terms that can easily be searched on twitter
RT -> Retweet ; PRT -> Partial retweet; MT -> Modified tweetHT -> Hat Tip: To acknowledge or credit someone for a thought/idea/resource or inspiration for your tweet or work

Hashtags are a great tool to flag points of interest or topic areas for your tweets. If you click on a hashtag it will link you into all recent tweets or popular tweets using the same tag; which is particularly great when you’re joining a global conversation. You can also start hashtags or use hashtags to provide extra commentary on what you’ve tweeted.

Tagging is when someone is notified of your tweet so that you are bringing them into a conversation. It is akin to messaging a twitter user directly in public so that others might join in on the conversation too. It also helps differentiate between “tweets” and “tweet and replies” which form two different feeds on your desktop version of twitter so that you can more easily follow an invidual’s unique posts rather than ongoing conversations or threads. I prefer to use tags at the start if it is a directed message; or if it is a broad message for everyone but I might want a particular group to be aware of it or spread the word, then I will tag them at the end.

Including a photograph or picture in your tweet is a great way to promote engagement. This is because it breaks up the wall of text in twitter and draws attention; but also because you can tag up to 10 usernames in your image.

Please keep in mind that any flow on from your tweets (e.g. retweets, likes) will be passed on via notifications to those tagged so tag with thoughtfulness. If you prefer; you can also use twitter settings so that you cannot be tagged in images.

At the end of your tweet mark it 1/X (X is either left as X or better yet should be the final number of tweets you plan to send out on the one topic ). You can then reply to your own tweet and end it 2/X and so on. This makes it easier for people to follow your chain of thought and to read your posts chronologically

You can also now create a thread using twitter ‘Moments’ where you can select posted threads to create your own chronological tweet slide decks.

Liking a tweet simply shows your approval or support or appreciation for a tweet that has been made; whilst a retweet enables you to spread the tweet to all your followers and beyond. You can also quote a tweet so that you can add your own commentary (in agreement or disagreement to the content you are retweeting). When you quote a tweet; it should be noted that the original thread will not appear below your tweet so people will have to click on the original to see the further commentary. Retweeting and quoting is useful and a good way to interact with others however if all you do is retweet and like; you will remain a passive user. We would encourage you to consider also writing some of your own tweets as well as quoting, tagging and discussing tweets with others. 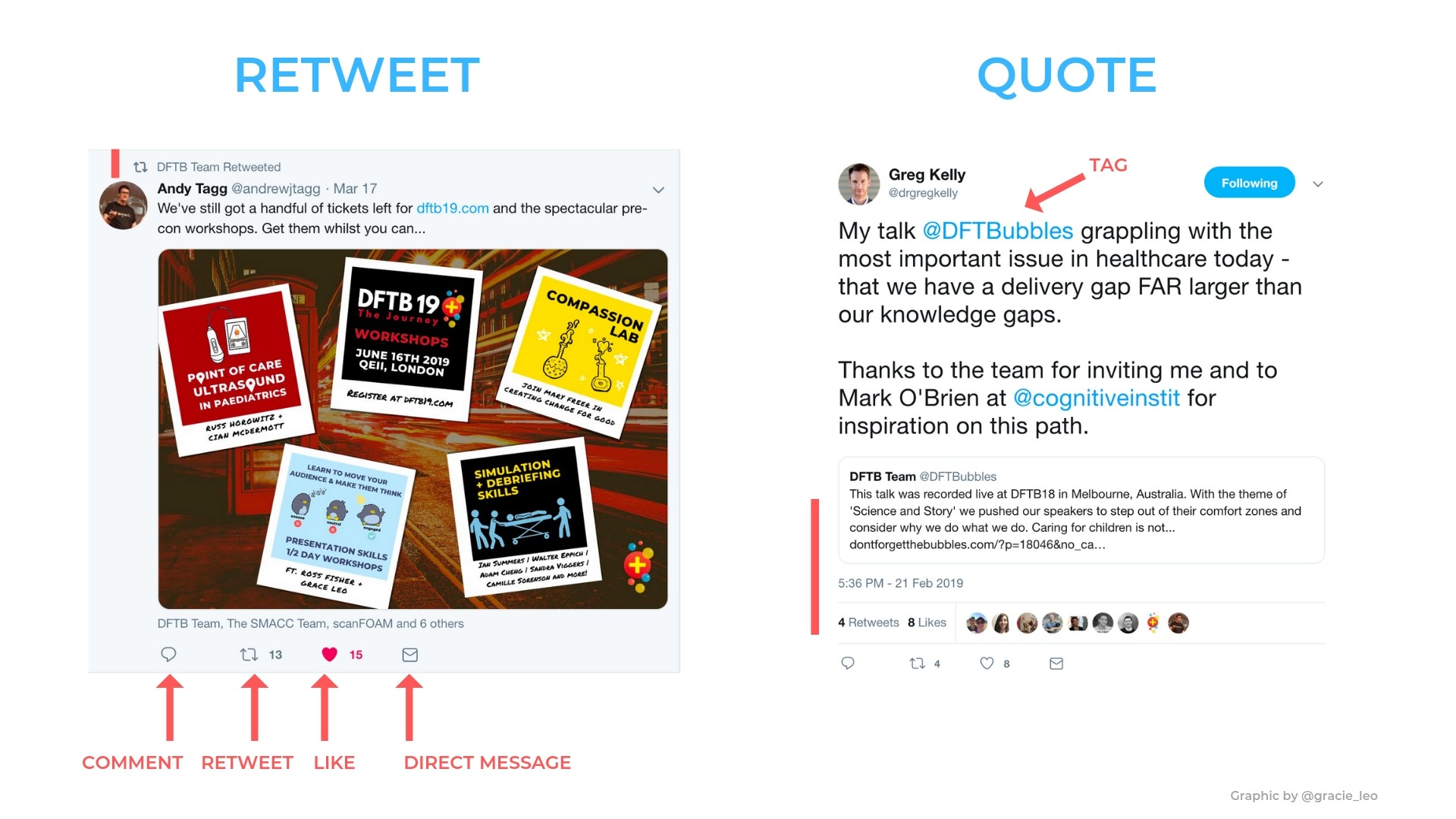 Polling can be a fun way of creating debate, getting other’s opinions or even assessing variations in medical practice. People cannot immediately see an answer unless they have voted or the poll has closed.

Now that you’ve established yourself by making some new friends and getting involved in discussion; it is important to follow good Twitter etiquette. People on twitter are the same as the people you  work with or walk past along the street. Unfortunately, the perceived anonymity of the internet can make some individuals feel empowered to misbehave or become hurtful or abusive in their commentary. Suffice to say, if behaviour is inappropriate or ‘below the line’ in real life; there isn’t any reason for why the same behaviour is any more acceptable online.

Just like driving; social media has its own set of ‘Road Rules’. You may have seen this handy reminder before:

Don’t Lie, Don’t Cheat, Don’t Steal: Some people choose to remain anonymous or de-identified on twitter. That is perfectly fine however it is important that in doing so you do not create a fictional character or portray yourself as being of a different skill set than you are (for example, listing false qualifications). Similarly; passing off someone else’s original thoughts as your own without acknowledgement (HT, MT or via) is another form of plagiarism or stealing. We should also be cautious to consider copyright on images we use online and that acknowledgement or payment may be required outside of ‘fair use’ situations.

Don’t Pry & Don’t Reveal: We should respect each others privacy and remember that twitter is a very public, worldwide forum. This is particularly important to remember when considering discussing patients. Images of patients or which reveal identifying patient details should only be posted with explicit consent given by patients for use not just for education but also specifically consented for use on social media. Consent should be obtained both verbally and in writing.

Whilst some groups have suggested a moratorium on patient cases of at least 5 years (provided identifying features such as age, gender, location have been changed); Don’t Forget The Bubbles would add that to this that it is never okay to post on social media any cases wherein the patient may recognise themselves (if not previously and thoroughly consented). The hippocratic oath reminds us to First Do No Harm. Sharing cases with unique features (e.g. sat on by a hippo), even if demographics are changed, may mean that patients are still identifiable and can be hurt by this even decades on.

Can’t Delete: Once your tweet is let loose on the world; like the fable of the gossip trying to retrieve feathers lost in the wind; once published, you can never take your words back. Twitter is not your private diary and even direct messages are not truly secure. This is part of the reason why it is so important not to tweet when in heightened emotional states as you’re more liable to write something you may regret. Just think of all the many politicians and personalities have gotten into hot water for this very thing. If you’re not sure whether you should post something – STOP. Instead you might save it as a draft and come back another day when you’ve cooled down and can see things more objectively. Chances are you may feel differently about what you wrote and be glad it didn’t spill out.

So what should you do?

With all those rules to keep the Twitter community safer and happier; what can and should you do on twitter?

We hope you will be able to use Twitter to interact, engage, explore and learn. Remain open to differing viewpoints and continue to be compassionate and kind. Advocacy, teaching, learning, making new friends and networking are all potential benefits of engaging in twitter.