Home > View All > Antibiotics for all?

Sometimes a paper is published that makes you stop dead in your tracks. In this post-truth era we are so used to reading headlines that sound too good to be true that we just skip over them. But this paper was published in the reputable New England Journal of Medicine.

The paper we are going to look at is this one.

A little bit of background

Azithromycin is used to treat trachoma in many African countries. It has also been used to treat pneumonia, diarrhoeal illness and malaria (Plasmodium falciparum) to some degree. Given the burden of these diseases it has been posited that mass distribution to at-risk infants and children might reduce mortality.

Who conducted the study?

The study was funded by a grant from the Bill and Melinda Gates Foundation with trial drugs and placebos provided (free of charge) by Pfizer. 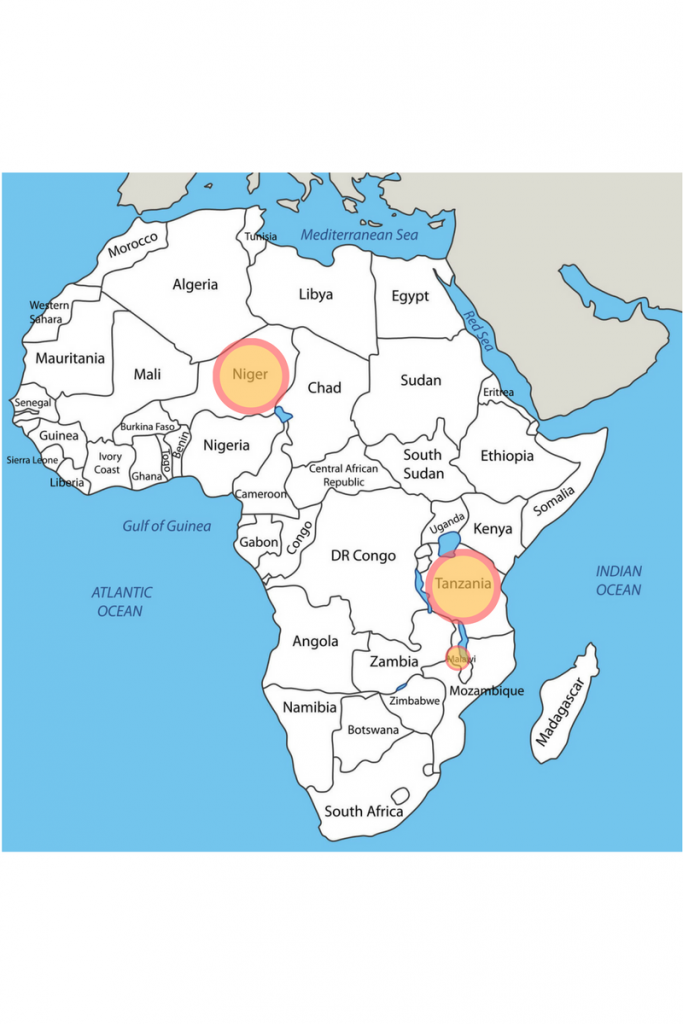 Africa is not one country but a continent of 54 disparate and different nations. According to the UN Development Fund, 46 of these are sub-Saharan. This was a cluster randomized trial that took place between 2014 and 2017 in three of them – Malawi, Niger and Tanzania. We all love a good trial acronym and this one is hard to beat – MORDOR (Macrolides Oraux pour Réduire les Décès avec un Oeil sur la Résistance).

Small communities that were not previously eligible for macrolide-based trachoma eradication, and thus had not received azithromycin previously, were identified. Those that had a population of between 200 and 2000 were eligible and all children between 1 and 59 months of age enrolled.

The standard group were given an identically packaged placebo

The pre-specified primary outcome measure was the community-level, three country aggregate mortality as measured by the twice yearly census.

So with the PICO out of the way, it is time to get a little nerdy (as Ken Milne would say). When I look at a paper I like to use a guide like that produced by the BEEM team, which is great for emergency medicine related topics. This trial doesn’t really fit into that remit as it is a massive multi-centre, multi-nation trial. So why not use the CASP tool instead?

Did the trial address a clearly focussed issue?

It certainly seems as if the trialists were rigid in their inclusion and exclusion criteria, using a simple intervention and a dichotomous outcome measure – dead or not dead.

Was the assignment of patients to treatments randomized?

Yes – there was central randomization using computer software. Participants, observers and investigators were unaware which trial arm a community was enrolled in.

The placebo arm received an oral suspension that was packaged identically to the study drug. It even contained a similar (drug-free) suspension so it would taste and smell the same as oral azithromycin.

Were the groups similar at the start of the trial?

Aside from the intervention, were both groups treated equally?

Were all the patients that entered the trial accounted for at its conclusion?

No. Some children moved to different communities and so were not included in the final analysis.

How large was the treatment effect? 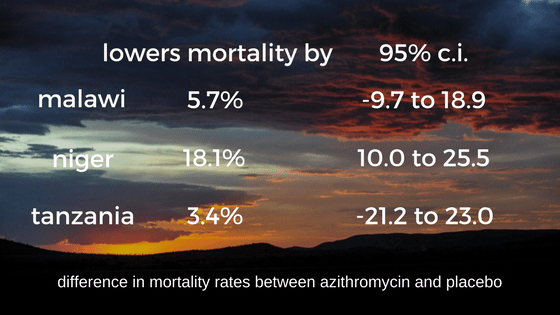 There was only a statistically significant decrease in mortality in the west African country of Niger. If you look at the confidence intervals above you could argue that there is another way to display this data. 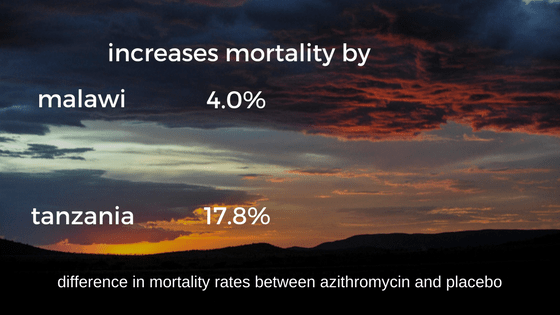 As usual, it is the subgroup analyses that provide the headlines. Mortality was highest in the youngest age bracket (1 to 5 months) and it was in this cohort that the largest mortality difference between groups was detected. There was no difference at the first census period but by the time the 5th (and final) period came around two and a half years later there was a statistically significant result with a 22.1% reduction in mortality in the azithromycin group (16.1 per 1000 person-years to 13.1 deaths per 1000 person years). 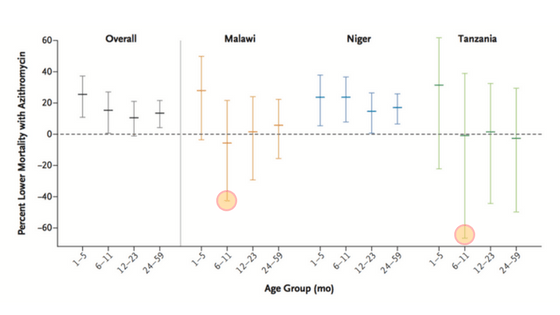 After table 5 from the MORDOR study

If you look at the percentage lower mortality per age bracket data in Malawi and Tanzania then remove the youngest cohort of children (1 to 5 months) it would appear that there little difference in  mortality in older children with large confidence intervals. But what I am more concerned by is the potential increase in mortality of up to 40% in Malawi and 60% in Tanzania.

How precise was the estimate of treatment effect?

The trial was designed to detect a 10% reduction in all-cause mortality. The assumption was that mortality would be between 14 and 20 deaths per 1000 person years in the placebo group.

Were all clinically important outcomes considered?

Death is the most important outcome. The trialists performed verbal autopsies of 250 deaths at each of the three sites. Approximately 41% were due to malaria, 18% to diarrhoea or dysentry and 12% to pneumonia. Cause of death did vary by country with more deaths occurring due to malaria in Niger and more due to pneumonia in Tanzania.

Are the benefits worth the harms and costs?

Given that 279,353 doses of azithromycin were given it is worth considering the potential adverse effects. 20 hospitalizations occurred due to azithromycin but it was impossible to collect data on more minor side effects. These include allergy, diarrhoea, abdominal pain and rash. The FDA reports an approximately 4.3% incidence of diarrheoa and 1% incidence of each of the other adverse effects. This would equate to 12012 more cases of diarrheoa in this study population.

The FDA does not approve azithromycin use in children under 6 months of age of age and recommends a dose of 10mg/kg on D1 and 5mg/kg on D2-5. Infantile hypertrophic pyloric stenosis has also been linked with macrolide usage, especially in children under two weeks of age, though the risk may persist up to 6 weeks.

The has been some controversy regarding the association between azithromycin usage and cardiovascular death due to QT prolongation in the developed world.

In our poached ivory towers we have seen the harms of indiscriminate antibiotic usage with a rise in resistant organisms. In a continent that still relies on streptokinase as it’s primary method of treating acute ST elevation myocardial infarcts what harm will come from potential antimicrobial resistance? The author are clear that indiscriminate distribution of azithromycin would select for macrolide resistance in S.pneumoniae and  E.coli.

Amongst post-natal, preschool children in sub-Saharan Africa, childhood mortality was lower in communities randomly assigned to mass distribution of azithromycin, with the largest effect seen in Niger.

Niger is ranked 187th out of 188 in the United Nations Human Development Index and has one of the lowest literacy rates in the world. 71.3% of the population cannot read. It has had a turbulent political history with three separate military regimes in power since independence in 1958. Around 45% of the countries budget is derived from foreign aid. 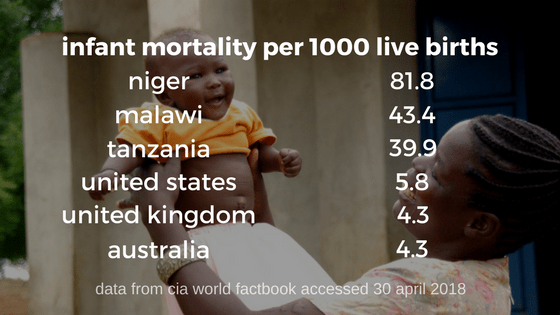 The authors should be applauded for their efforts in carrying out such a massive trial. Studies like this, the FEAST trial and some of the large HIV vaccine trials show that quality research can, and should be done, in Africa.

On balance, I would be more circumspect in my conclusions. Certainly, it does appear that mass distribution of azithromycin in Niger reduces mortality in post-natal, pre-school age children. I think it is a little harder to generalize the findings to the whole of sub-Saharan Africa.

of trachoma on carriage and resistance of Streptococcus pneumoniae. Clin Infect Dis 1997;24:356-62.

1 thought on “Antibiotics for all?”