Home > View All > The burden of trauma

The burden of trauma

In our effort to live just a little longer we are trying to spot sepsis sooner, choose exactly the right antibiotics, give the right amount of fluids – not too little and not too much – but there is something else we can do. We can do out best to try and get our children to wash their hands, cover their noses when they sneeze, but what about that other cause of childhood morbidity and mortality? What about trauma?

If we asked the average person on the street, or even in the hospital what the incidence of paediatric trauma was, do you think they would know? Ben Beck and the team from the Prehospital, Trauma and Emergency Research Group at Monash University in Melbourne have attempted to answer that very question.

By looking at data from the Victorian State Trauma Registry (VSTR) the researchers identified 1511 paediatric major trauma cases in the decade between 2006 and 2016. To be eligible for entry into VSTR the following criteria need to be met:-

A patient had to be less than 16 years of age to count as paediatric in this dataset. 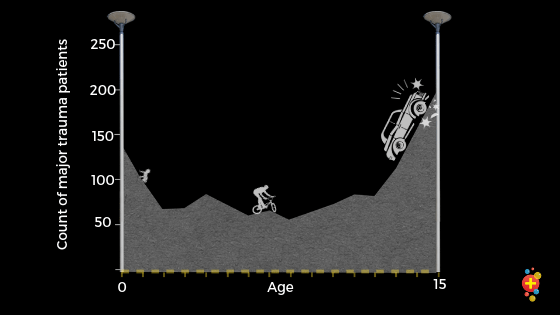 83 of these 1511 cases were classified as non-accidental in nature though this figure may be higher due to under-recognition of the cause when the infant first arrived in hospital. The vast majority (31.7%) were in children under the age of one, with NAI accounting for 54% of all major trauma presentations in this age group.  As children become older and more mobile the mechanism changes with falls predominating, especially from the dreaded playground equipment. Then, in their teenage years children are more likely to be involved in road transport crashes of some sort.

No mention is made in the report of proportion of Aboriginal/Torres Strait Islanders involved though national data from the Australian Institute of Health and Welfare would suggest a much higher burden (across all age groups) in this cohort.

“..when far behind them they heard a faint warning hum, like the drone of a distant bee. Glancing back, they saw a small cloud of dust, with a dark centre of energy, advancing on them at incredible speed, while from out the dust a faint “Poop-poop!” wailed like an uneasy animal in pain. Hardly regarding it, they turned to resume their conversation, when in an instant (as it seemed) the peaceful scene was changed, and with a blast of wind and a whirl of sound that made them jump for the nearest ditch. It was on them!”

Kenneth Grahame, The Wind in the Willows 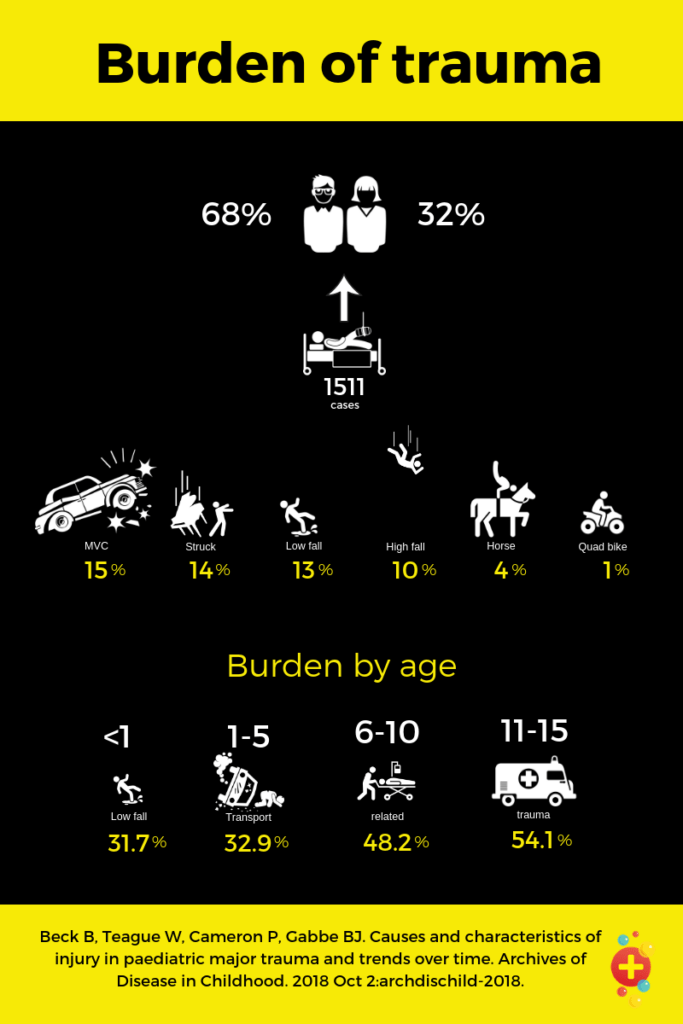 Over a time span that bracketed Casino Royale (2006) and Rogue One (2016) there was very little change in the incidence of paediatric trauma, with only a small reduction in motor vehicle related events leading to major trauma. This mirrors AIHW data from across Australia which has shown very little change in transport related deaths.  Infant mortality though, in the setting of trauma, has dropped precipitously over the 20th century. The introduction of key legislation regarding seat belt use in 1970 saw a drastic reduction in overall mortality and morbidity though children under the age of 8 were excluded! Further tightening of the laws in 2010 that meant that children up to the age of 7 have to be adequately restrained in an appropriate manner may have accounted from some of the year-on-year reduction of transport related encounters but they do still occur.

“What is particularly concerning is the absence of a change in the incidence of paediatric major trauma over an 11-year period. It is clear that enhanced injury prevention and safety promotion activities are required. It is great to see the Australian Government allocate $0.9 million to develop a well-overdue National Injury Prevention Strategy, but we all have a role to play today in reducing the number of seriously injured kids to zero.”

Some limitations in the registry

The VSTR was set up in 2001 to prospectively collect data from all hospitals in Victoria, Australia.  And whilst inclusion in the registry is based on based of pre-defined characteristics it is only as good as the data entered.  When a patient presents to the emergency department and is logged as an injury (rather than an illness) the triage nurse or treating clinician are encouraged to fill in a series of boxes to provide key data points. 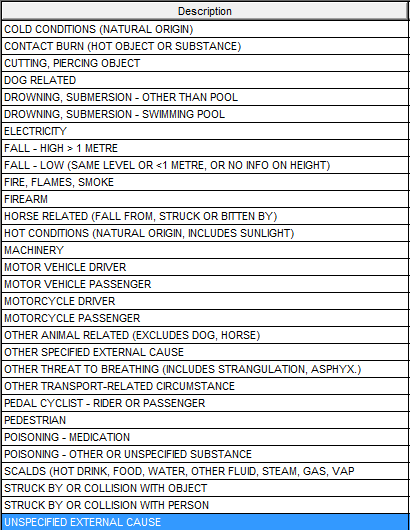 With 30 options to choose from it can be easy to just try and make the box go away by clicking on Unspecified External Cause. It can be even harder to decide what the intent is with non-intentional harm being the default for most users at the coal-face.

The authors rightly point out the potential of survivor bias in the VSTR data. Though they report the in-hospital mortality (7.2%) those children that are so severely injured that they do not make it to hospital will not impact on these statistics. According to the Australian Bureau of Statistics around 20 children (here classified as under 17 years of age) die every year in Victoria as a result of a transport related incident. It would be interesting to see how the addition of these and other non-illness related deaths might affect the data.

“All of these serious injury events are preventable. Serious injury events in childhood are often complex and multifactorial, and a sensitive balance exists between preventing injury and continuing to promote physical activity in children. It is therefore critical that injury prevention strategies must not restrict access for children to engage in physical activity, but rather provide them with an environment to safely do so.” 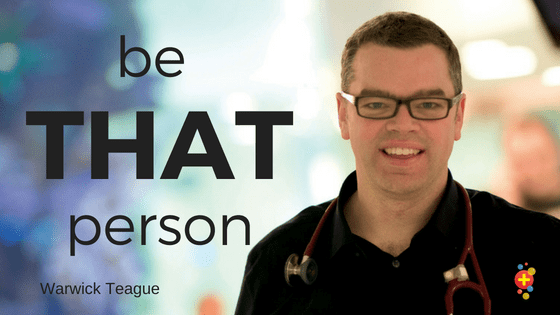 What does the Director of Trauma at the Royal Children’s Hospital, Warwick Teague, Melbourne have to say?

“I expect, based on my own experience of this research question and project, that many people would imagine that the number of children being injured is going down. There are a lot of injury prevention programmes in play in Australia, many of which are bearing evidence-supported fruit… helmets on kids on bikes, fences around pools, child seats in cars, and increased care around driveways, BBQs and campfires. Many will ask, if such injury prevention programmes are working, why are we not seeing a corresponding drop in injury rates?

The answer to this simple and understandable question is far from simple, but I hope there is some comfort in knowing that we continue to strive to understand. Let me have a go, and perhaps indulge me the moment to mix evidence, information, experience and speculation in offering some of my beginnings to this answer

Even if we successfully prevent many and more childhood injuries, injury rates may still go up if the number of kids exposed to risk climbs at even higher rates. So, transport-related injury rates are coming down, which may be because pretty much the same number of kids are in or around cars as before, but now we have slower and smarter cars, better road rules, better car seats, and bike helmets etc… and so less injuries. Meanwhile,  we drink increasingly more coffee, chai, or whatever than ever before, which may be part of the picture about the apparently increasing number of hot drinks scalding our kids. This doesn’t mean we should stop current prevention measures, or heaven forbid, curb our love of latte… but maybe we need to listen to the data and community to make prevention even more effective, and adopt measures that truly reduce exposure. If only coffee served at 48 degrees tasted even better!

There are many commendable people and programmes working in Australia to reduce childhood injury… for example Kidsafe, early learning groups, hospitals, university and community groups. But Australia lacks a coherent, empowered and resourced National Injury Prevention Plan & Strategy, coordinating these people and programmes, and ensuring efforts are both delivered when and where they are needed most and evaluated to validate, learn and improve going forward. A new and exciting initiative is CHIPA (Childhood Injury Prevention Alliance, https://stopkidsinjury.org), who successfully lobbied the federal government to commit $0.9 million over three years from 2018-19 to develop a new National Injury Prevention Strategy Plan. This is a great start, to a very large body of work, which seeks to address the alarming reality: injury remains the single largest cause of death and disability in Aussie kids. If you know a politician, or would be willing to get to know one, get on the blower and turn up the heat for real commitment, to enable real and coordinated action, for real and transforming reduction in childhood injury rates.

OK, borderline rant over, but the results of this study are as real as the importance of what we do next in response to these results. Please don’t be discouraged, and so disengage from childhood injury prevention, for fear all our efforts have been in vain. Please be inspired by the recognition that our good and even bold efforts to prevent childhood injury have not been enough to reduced rates, and so there is work to be done. It is time to rejuvenate, innovate, coordinate and evaluate our way into a safer future for children in every corner of Australia.”

What is worth bearing in mind is that nearly every one of these 1511 major paediatric traumas was, in some part, preventable. With little reduction in either morbidity or mortality over the last decade there is clearly room for improvement. Listen out for Warwick Teague’s talk from DFTB18 on the challenge of getting to zero.

McDermott FT, Hough DE. Reduction in road fatalities and injuries after legislation for compulsory wearing of seat belts: experience in Victoria and the rest of Australia. British Journal of Surgery. 1979 Jul;66(7):518-21.