Amit is a 16-year-old male who lives in a city in England. He is the front seat passenger in a serious road traffic accident and has sustained multiple severe injuries. The ambulance arrives. There is a child, mixed and adult major trauma centre within a similar distance. Which one should Amit be taken to? Will it affect the outcome?

Firstly, how common is adolescent trauma and how do trauma networks work in England?

Among children and young people, adolescence is the stage of life that carries the second-highest risk of death after infancy. There were approx. 1,330 deaths for young people aged 10 to 19 years across the UK in 2018 and this has increased since 2014 (ONS, 2018).  The leading cause of adolescent mortality is trauma.

In a previous EMJ publication, Roberts et al. provided an overview of adolescent trauma epidemiology in England from 2008-2017 using the TARN (Trauma Audit Research Network) database. This paper, along with the Evans et al. study, extends the age definition of adolescents to 10-24 years as endorsed by the RCPCH. Over a 10 year period, they found that there were 40680 trauma cases. 80.5% of these cases were aged 16–24 years and 77.3% were male. The main mechanism of injury was road traffic collisions accounting for 50.3% of cases.

NB: The TARN database includes patients of any age who sustain injury resulting in hospital admission for three days or greater, critical care admission, transfer to a tertiary/specialist centre or in-hospital death within 30 days.

Trauma networks were established in England in 2012 with the designation of major trauma centres (MTCs) and linked trauma units (TUs). The 27 MTCs are divided into 11 adult, 5 paediatric and 11 mixed major trauma centres (MTCs).  Where you are treated depends on age and location. As a general rule,  trauma patients under 16 years will be triaged to children’s MTCs whilst those 16 years and above are triaged to adult MTCs. Mixed MTCs are able to treat both adult and paediatric trauma patients. Major trauma is defined as having an Injury Severity Score (ISS) of over 15.

Why was this study needed and what did it find?

Since the establishment of trauma networks, there have been no studies comparing the outcomes for adolescent trauma between MTC types. Adolescents are a unique and often neglected cohort, especially those at the age when services transition between children and adult services.

In their cross-sectional study, Evans et al present data from TARN comparing the outcomes of adolescent trauma patients who had a primary transfer to an MTC from 2012 to 2018. Using this data, they compare mortality rates for severely injured adolescents in the different MTC types. Note the study does not include trauma units (TUs) or transfers from a TU to an MTC.

The study population included 30321 patients aged 10–24.99 years in the 6 year period.  The majority were treated in mixed MTCs (54%) with the fewest being treated in children’s MTC (8%). Even accounting for the variation in numbers seen, the study found that children’s MTCs had a lower 30-day mortality rate for adolescent trauma than adult or mixed MTC.

So does this mean Amit should be taken to a children’s MTC after his road traffic collision?

We need to take a look at this further under two themes: patients and setting.

As you might imagine, the study found that mixed and adult MTCs were more likely to see patients with more severe injuries. Stabbings and shootings were more frequent in adult and mixed MTCs. Patients in children’s MTCs had a lower median Injury Severity Score and fewer comorbidities. All of these trends could reasonably contribute to the higher mortality rate in mixed and adult MTCs. However, the study accounted for all of these potential confounding factors and found that the lower mortality associated with children’s MTC remained statistically significant (Table 1).

You could argue that comparing the treatment of 10-year-olds to 24-year-olds is unrealistic and that the extremes of age are not where the interest lies. Recognising this, the study analysed those aged 14-17.99 years given the potential of this age group to be treated in any MTC. In this subgroup, the adjusted odds ratio for mortality was significantly higher in adult MTCs in comparison to children’s MTCs. There was no significant difference between mixed and children’s MTCs.

Could the difference in mortality rate be explained by differences in staff experience and specialism at each MTC type? Do the MTCs use different management strategies or guidelines that could account for the difference in outcomes? These questions were not within the scope of this study although it did look at the most senior clinician present at the initial resuscitation and time to CT as secondary outcomes. It found that consultants were the most senior clinician likely to be present at all MTC types. With regards to imaging, trauma cases were less likely to have a CT if they presented to a children’s MTC reflecting one of the differences in managing adult and childhood trauma cases. It also took longer to perform a CT at children’s MCTs when compared with other MTC types but this does not seem to have affected the outcome.

In their editorial, Leech et al (2021)  suggest further reasons for the outcomes found in this study. They highlight that the majority of trauma patients present to non-children’s MTCs with the inherent danger of ‘trauma alert fatigue’. The rarer incidence of these alerts in paediatric centres may, however, give a more focused response. Other influences may be different approaches to education and training and also the nature of parents often being present for children and young people. What impact this has will probably need to be the subject of further research and evaluation.

Back to Amit, our 16-year-old patient post-RTC.  He is being transferred to the nearest adult MTC as per current protocol.

Has this study changed your opinion on where he should be seen? Should the cut-off age for triage for adolescents be changed based on this study? More research is required but this study does show us that children’s MTCs can manage adolescent trauma with good outcomes despite seeing a lower volume of cases.

Some thoughts from Jordan Evans

Adolescent healthcare crosses paediatric and adult services with transition predominantly based on age (16 in the UK). The same applies for trauma provision, with an adolescent trauma patient potentially treated in a children’s, adult or mixed MTC. What I wanted to know was does the centre type (children’s, adult or mixed) that an adolescent trauma patient attends affect the outcome?

We used one of the largest trauma databases in Europe (TARN) to help answer this question, defining adolescence as 10-24, in keeping with our previous research and international consensus. Appreciating that some would find this definition too broad, we performed sub-group analysis narrowing the age to 14-17.99 and for those defined as severe trauma (ISS>15). The primary outcome was mortality at 30 days and secondary outcomes included grade running resus, CT and length of stay. Both crude and adjust statistical analysis were performed (adjusting for mechanism, ISS, physiology amongst others).

Our total population for the study was 30 321 patients of which 54% presented to a mixed MTC, 38% to an adult MTC and 8% to a children’s MTC. Mortality within 30 days of injury was higher in mixed (4.4%) and adult MTCs (4.9%) compared with children’s MTCs (2.5%, p<0.0001). The same trend was noted in the adjusted analysis. For those aged 14–17.99 the crude OR of mortality was 1.73 (p=0.032) and adjusted 2.77 (p=0.030) in adolescents treated at the adult MTC. The trend for improved outcomes in children’s MTC was also noted in those with severe trauma.  For secondary outcomes, there was no difference in median total or ICU length of stay although less CT’s were performed in the children’s MTCs compared to the others. A slightly higher proportion of cases were managed by juniors in adult MTCs.

I think this is a timely paper and I feel greater attention is being paid to the adolescent cohort who are often appropriately labelled as the ‘forgotten tribe’. The divided approach to adolescent healthcare is certainly a hindrance, with neither adult or paediatric services fully embracing the challenge to help drive down the high mortality and morbidity rates. A sister paper to this, reported an increase in adolescent trauma cases within the UK and a marked rise in stabbings, placing the onus on us to formulate a cross speciality approach to address the needs of this cohort.

I would thoroughly recommend reading the commentary in EMJ by Caroline Leech and Rachel Jenner who give a balanced discussion on the results with the authors hailing from adult and paediatric EM backgrounds. Personally, I would not suggest changing current trauma provision based solely on this data but that it acts as a conduit for further research and discussion.

Given the age cut-off of 16 years of age, there is limited overlap in the patients treated at children’s and adult MTCs making the comparison difficult.  However, there are times when triaging by age is not possible.  Indeed, the study found that there were 430 patients in the study under 16 years old who were treated in adult MTCs (9.9% of all aged <16 years) and 17 patients over 16 years attended a children’s MTC (0.1% of all aged 16–24.99 years).

Maturing your approach to trauma: Anne Weaver at DFTB19

Anne Weaver is a consultant in Emergency Medicine & Prehospital Care at The Royal London Hospital and Lead Clinician for London’s Air Ambulance. In this talk she shares her experience of caring for the ever-increasing number of stabbing victims in the United Kingdom. 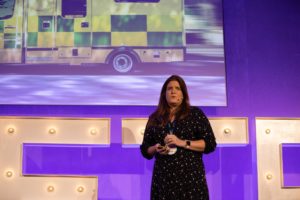 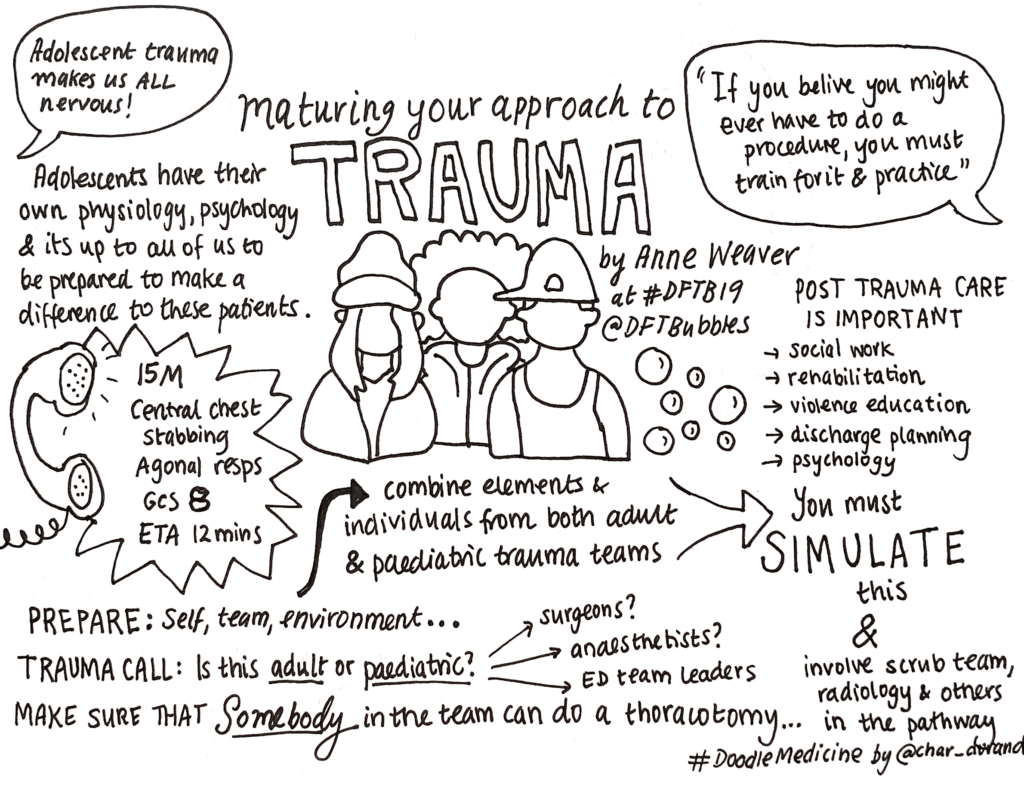