The mire of mycoplasma

After a busy ED shift filled with innumerable toddlers with viral-induced wheeze, your last patient of the day is a little older than most of the others you’ve seen presenting with respiratory distress. A 7-year-old child wearing their school uniform lies in bay 2, having been sent home from school seeming a little ‘flat and breathless.’  You check her triage stats and note a temperature of 38.2℃. From the end of the bed, she looks comfortable yet a little tachypnoeic, and the oxygen monitor is hovering around the high 80s. She has some crackles on auscultation so you decide to do a CXR which reveals bilateral peribronchial shadowing. You piece her age and clinical picture together and pat yourself on the back for nailing a diagnosis of pneumonia secondary to Mycoplasma pneumoniae.

Diagnosing pneumonia can be tricky. Each year, 1.2 million children under five years of age die from pneumonia. In developed countries, the incidence is 0.05 per person-year. Pneumonia can imply both bacterial or viral, and there is a distinct challenge in differentiating between these given similar clinical and investigative pictures, or even the presence of pneumonia at all.

What about some POCUS? Can we utilise this investigative modality to spot a child with pneumonia?  The paper from Archives of Disease of Childhood featured in our third #DFTB_JC sought to answer this question. 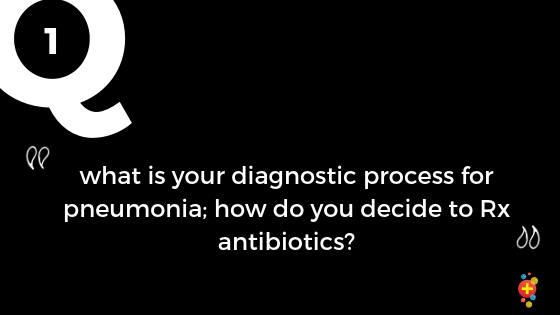 The general sentiment from the Twitter discussion was that making a diagnosis of pneumonia is challenging. More specifically, there’s no reliable way of differentiating between viral and bacterial pneumonia, nor any particularly strong evidence for whom should or should not receive antibiotic therapy.

Most of those actively contributing (including Sarah McNab, Edd B, Damian Roland & Ding online identified the use of clinical skills; with an emphasis on history (of fever, cough) and examination features (pallor, focal chest findings), with the use of chest radiograph (or roentgenogram if you’re feeling formal), to augment or refute this diagnosis. 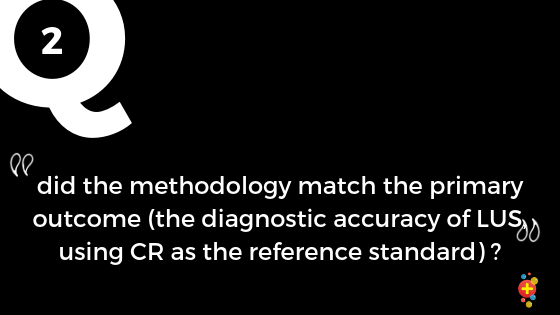 The authors methodology made sense with respect to answering the stated question regarding the diagnostic accuracy of LUS vs CXR for diagnosing pneumonia, using this approach: 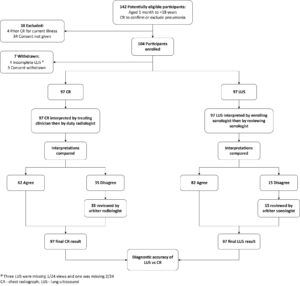 Although there are well established pros and cons for each modality there was a distinct lack of congruity about which modality was the more accurate, including the rates of agreement between both operators. Jessica Wong (@jessicawswong) also identified Dominguez et al.’s related 2018 article in the Journal of Paediatrics and Child Health. 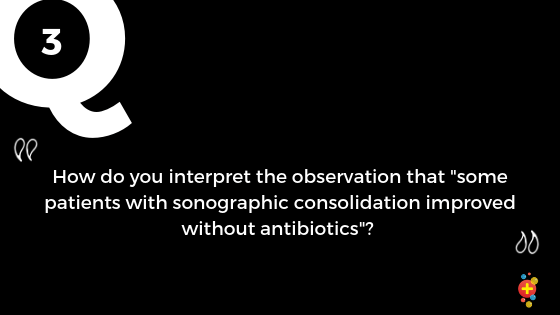 Sonia Twigg and Damian Roland identified the intricacies of anatomic pathology, citing the difference between the clinical entity of pneumonia and the pathologic entity of hepatisation (grey vs red); I recommend Robbins’ pathology for a refresher.

Pneumonia and LRTI are/look the same same on the ultrasound. The USS findings they sought were “lung consolidation” (I would use the word hepatisation) and air bronchograms. I think we often use the word pneumonia when we find a large, focal area of hepatisation.

For me, this is the crux of the matter. Comparing radiological methods is great, but the real question to be answered is “Is LUS better than CXR at selecting patients that will benefit from treatment?”. Which is an extremely tough question to answer, and not managed by this paper

Both Sonia & Edd B have identified the key challenge with the paper (and frankly acknowledged the next step, nicely summarised by Lassi et al in this Cochrane Review (emphasis mine).

“Pneumonia is an infection of the lungs. In children it is one of the leading causes of childhood deaths across the globe. Pneumonia can be classified based on the World Health Organization (WHO) guidelines. This classification involves assessment of certain clinical signs and symptoms and the severity of disease. The treatment is then tailored according to the classification. For non-severe pneumonia, the WHO recommends the use of oral antibiotics for treatment. However, pneumonia is caused more commonly by viruses that do not require antibiotic management but rather supportive care. On the other hand, pneumonia caused by bacteria needs management with antibiotics to avoid complications. Since there is no clear way to distinguish quickly which organism actually caused pneumonia, it is considered safe to give antibiotics. However, it may lead to the development of antibiotic resistance and thus limit their use in future infections. Thus the question arises as to whether the use of antibiotics is justified in non-severe pneumonia.” – Lassi et al. 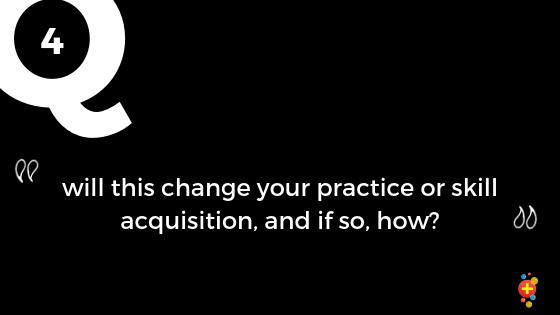 For me personally, this paper has sought to highlight an emerging utilisation of POCUS; whilst it contributes to – rather than definitively answering – the evidence and understanding around both paediatric pneumonia and the availability and utility of USS & CXR.

In my view the value of USS would be by clinicians to augment clinical exam where there is not immediate access to CXR (eg. primary care). It’s not practical to put a load of radiographers in ED or wherever these children are being seen to scan lots of febrile children. #DFTB_JC

So, a short summary of what we’ve discussed;

– CXR is the “Gold standard” Ix, but the clinical diagnosis of pneumonia remains the most accepted, with occasional augmentation via CXR

– LUS vs CXR are roughly comparable, both with flaws regarding isolated accuracy & predictability

– This study hasn’t been designed to inform whom should receive treatment, but it’s what we’d all like to know

Thanks again to everyone who participated in our #DFTB_JC and we hope you will join us again later this month for our next paper, thanks to #ADC_BMJ.

If you want to level up your POCUS skills then why not sign up to one of our point of care ultrasound workshops. They are going to take place on the Sunday before DFTB19. Check out the website for more details.

DFTB17 – Defence Against The Dark Arts

In just two weeks time we are going to be running our very first conference. We have been very lucky to draw on the expertise of some amazing speakers from around the world of paediatrics. Tim Horeczko is hosting an exciting evidence-based medicine panel discussion and wants you to join in.

“It is my job to arm you against the foulest creatures known to wizardkind. You may find yourself facing your worst fears in this room. Know only that no harm will befall you whilst I am here. I must ask you not to scream. It might provoke them!“

What is evidence based medicine?

“the conscientious, explicit and judicious use of current best evidence in making decisions about the care of individual patients. … [It] means integrating individual clinical expertise with the best available external clinical evidence from systematic research”

The panel are going to explore four papers, picking them apart in an easy to understand way. This isn’t about fancy statistical tests but how to take the evidence we are presented with and translate it into real life.

So if you want to join in this endeavour then take a peek at the papers we are going to discuss. If you can’t make it then don’t worry, Aidan Baron will be our fearless Twitter moderator and can field your questions from afar.

Who is on the panel?

This years panel consists of:-

And so to the papers…

Here is a recently published booklet which summarises much of the latest research on child health in developing countries. It consists of evidence derived from all the randomised trials published over the last year.

Professor Trevor Duke, Intensivist at the Royal Children’s Hospital in Melbourne has put together this excellent summary of some of the key findings, and has kindly allowed us to share it with our DFTB readers.

This year there were 187 publications from randomised or controlled trials. We have high-lighted just a few of the trials.  It is well worth perusing the booklet, if only to realise how lucky those of us are that practice in the developed world when it comes to resources.

Pneumonia is a leading cause of mortality in children under 5 years old worldwide.

In a trial of over 1000 Indian children with clinical signs of pneumonia with tachypneoa, and chest indrawing out-patient treatment with oral amoxicillin was similar, in regard to treatment failure, as in-hospital treatment, at 7 days.

In a trial of hospitalized children with community acquired pneumonia in Thailand, switching to oral antibiotics within 24 hours of cessation of fever and symptom improvement, was as effective as conventional intravenous therapy.

Use of bubble-CPAP in children with severe pneumonia in Bangladesh was associated with lower risk of death than standard oxygen therapy.

In the setting of fluid refractory shock, in Brazil, early peripheral adrenaline was associated with decreased mortality when compared with dobutamine.

A single dose of oral ondansetron reduced the risk of treatment failure with oral rehydration solution and reduced the need for IV therapy in India.

In a large meta-analysis of over 14,000 cases in low and middle income countries hand-washing promotion reduced community diarrhoea rates by about 30%.

Improving water quality in communities in Ghana by drilling bores reduced diarrhoea prevalence in children by 11%. This is in contrast to efforts in rural India to improve sanitation and reduce open defecation which were only partially successful in reducing faecal bacterial loads and cases of diarrhoea.

When treating hyperbilirubinemia in term and late-preterm neonates in Nigeria, filtered sunlight was effective in controlling bilirubin levels on 93% of days, and conventional phototherapy was effective in 90% of days. It appeared safe with temperatures higher than 38.0°C occurringin 5% of infants receiving filtered sunlight and in 1% of those receiving conventional phototherapy.

Like most studies in low and middle income countries sample sizes are small and so it is hard to generalize but among preterm Indian neonates with a patent ductus arteriosus, enteral paracetamol was as effective as intravenous indomethacin in closing the PDA: 100% (36/36) versus 94.6% (35/37) respectively.

This is the 14th edition of this booklet.  Previous editions, which summarise 2182 trial publications from 2002-2015 are available at www.ichrc.org.

This week’s vodcast is a great new series by SonoKids. Kasia Hampton gives us a crash course in diagnosing pneumonia using ultrasonography. In this vodcast that is less than ten minutes long, Kasia covers all the basics. It starts with an overview of the normal lung anatomy as seen on ultrasound and continues right through to the signs to look for in pneumonia. By the end, you feel ready to get started and try it yourself.

We look forward to hearing more from SonoKids.